An Australian technology firm backed by Malcolm Turnbull and with ties to billionaire Mike Cannon-Brookes is betting a massive expansion of renewable energy will spur demand for its novel solar panels and trigger a bonanza of manufacturing jobs.

5B, named for the roughly five billion years of sunshine remaining, has developed solar panel arrays that can be factory-built and rolled out rapidly and at scale in the field, slashing construction costs. 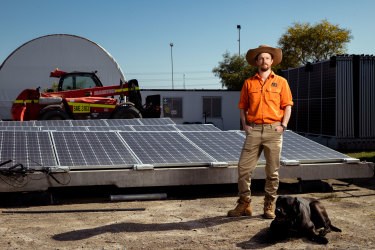 Chris McGrath, 5B co-founder and chief executive, stands in front of one of his firm’s hinged, solar arrays at a site at Kurnell on Sydney’s south.Credit:Dominic Lorrimer

The Sydney firm, which includes many graduates from the world-leading University of NSW’s School of Photovoltaic and Renewable Energy Engineering, has expanded from 30 staff a little over a year ago to more than 140, with plans to more than double again by the end of next year.

“We’re ready to grow really hard in 2022 as our capacity ramps up and our costs keep ratcheting down,” Chris McGrath, 5B co-founder and chief executive, said. “It’s a crazy time to be growing the business in the way that we are, but it’s also a great time to be capital raising,” he said, referring to low interest rates.

Solar panels in conventional plants face north in the southern hemisphere, and the opposite in the north, and are increasingly built to track the sun’s daily movement for maximum electricity generation. 5B’s innovation, though, is to blanket the land with fixed east-west facing panels, set at a 10-degree angle, to increase the number of solar cells that can be installed on any given area.

5B’s other advantage is the company is the preferred solar supplier for a potentially mammoth solar farm proposed by Sun Cable, a mega-solar farm backed by Mr Cannon-Brookes and fellow billionaire Andrew “Twiggy” Forrest, for the Northern Territory. US Energy giant AES is among 5B’s investors.

As this masthead reported last month, Sun Cable is planning to announce a “significantly bigger” project already touted to be some $22 billion and 14-gigawatt solar capacity. Large solar plants in Australia are typically a couple of 100 megawatts in size.

Solar’s potential also received another tick with the Biden administration declaring the energy source could supply as much as 40 per cent of US electricity by 2035, up from about 4 per cent now. 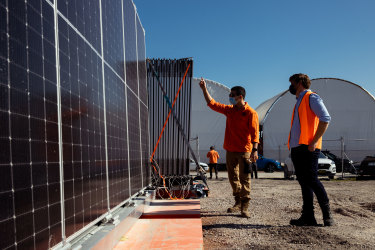 To fund 5B’s continued expansion, including a move to new facilities near Sydney’s Mascot Airport by the end of October, the company is in the midst of raising as much as $50 million in its latest capital raising. The firm is also ramping up plans for a factory in Darwin, and expanding its operations abroad, from Chile to the US and India.

Former prime minister Malcolm Turnbull said he had invested in 5B last year and would decide on making a further investment, adding his venture capital companies typically outlay more than $500,000 per foray.

“The world needs much more solar energy as quickly as possible,” Mr Turnbull said. “Chris McGrath leads a brilliant young team which embodies all of the values we like to support: disruptive Australian innovation [and] great engineering powering the clean energy transition the world needs.”

Jonathan Upson, a veteran of the Australian renewable energy industry, said he was present in Perth three years ago at the first public demonstration of the technology.

“I was so impressed by the simplicity and innovation of 5B’s approach,” Mr Upson said. “It’s terrific to see younger Australian entrepreneurs start and grow a new business in such an important worldwide industry.”

From its first project of just 80 kilowatts in 2017, 5B has installed about 40 megawatts over 50 sites in Australia. It has installed as much as 1 megawatt of capacity a week with just three people.

“We’re expecting to be at gigawatt-scale orders, possibly by 2022 but certainly deploying gigawatts a year by 2023,” Mr McGrath said. “We’ve got a solution to drive a huge amount of growth in a market that doesn’t have a ceiling right now.”

Liam Mannix’s Examine newsletter explains and analyses science with a rigorous focus on the evidence. Sign up to get it each week.