BBC Three slammed for 'another daft excuse for a dating show'

‘Is this what pensioners were forced to pay a licence fee for?’ BBC Three is slammed for ‘daft’ dating show’ featuring online couples who have never met in real life – who ‘all happen to look like hired models’

The channel, which targets viewers aged 15-35, was moved to an online-only offering on iPlayer in February 2016 in a bid to save £30million a year, with the budget redistributed to fund dramas on BBC One.

But it returned to TV screens again last month – showing a mix of reality shows and competitions, including its latest offering which sees five online couples meet in the real life for the first time.

The programme, which sees five couples who have only spoken online spend one week together in a luxury Greek beach house, received negative reviews from some viewers.

Many called the show a ‘knock off Love Island’, while others felt suspicious of the fact that all the online ‘couples’ who had never met in real life, ‘happen to look like hired models’.

‘Is this what pensioners got forced to pay a TV license for the BBC to make. Another uninteresting reality show. #LoveInTheFlesh’, wrote one viewer. 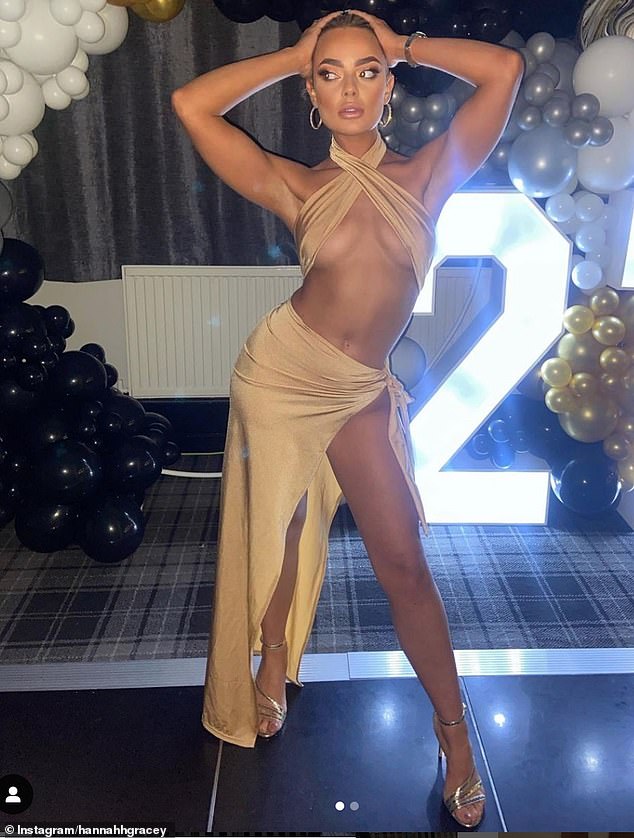 Legal assistant Hannah, 24, from Huddersfield, appeared on ‘Love in the Flesh’ to meet online boyfriend Brandon 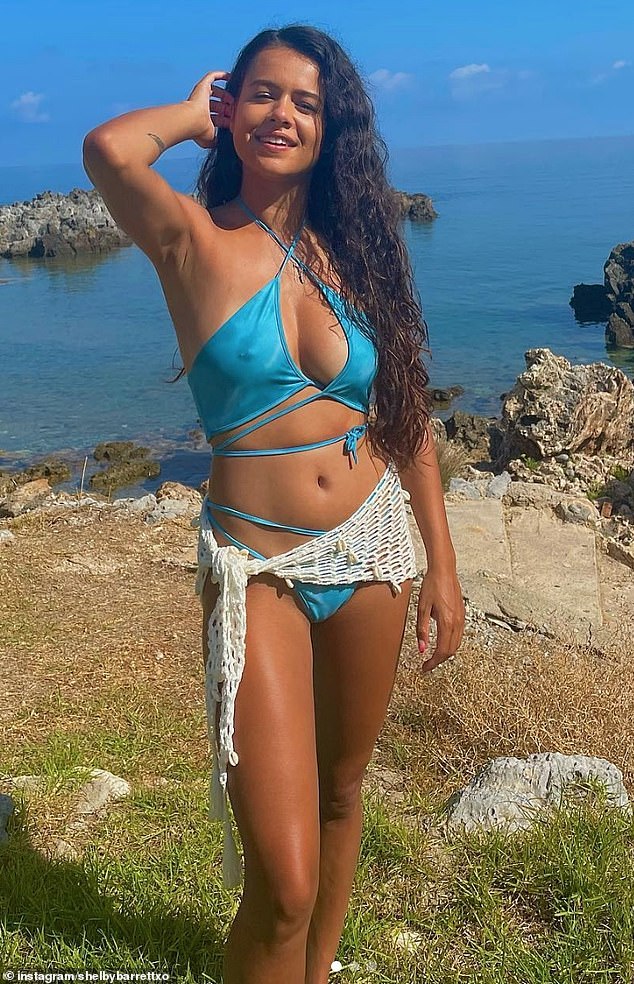 NHS worker Shelby, 24, appeared on the show where she met influencer Millie, 23, from London, for the first time 10 months after connecting online 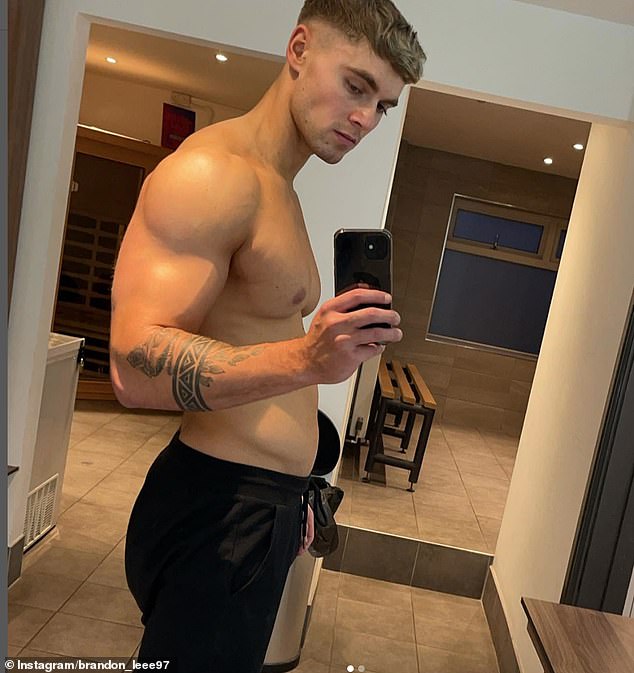 Legal assistant Hannah, 24, from Huddersfield, started speaking online with 23-year-old student Brandon, from Sheffield after connecting on a dating app six months before the show

Another said: ‘Love in the Flesh is another daft excuse for a dating show isn’t it. People that have only ever spoken on the internet and yet they all happen to look like hired models. Where are all my ugly nerds that met playing World of Warcraft at?’

‘The amount of hatred I have for reality TV, this new show Love In The Flesh is just a bunch of “celebs” dating. WHO CARES???’, said a third.

The programme, hosted by Love Island star Zara McDermott, follows five couples who met on social media and are meeting for the first time to figure out whether they have a chance of a relationship in the real world. 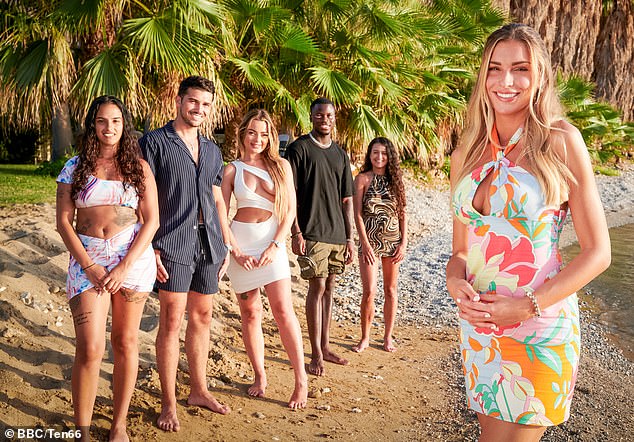 The programme, hosted by Love Island star Zara McDermott, follows five couples who met on social media and are meeting for the first time 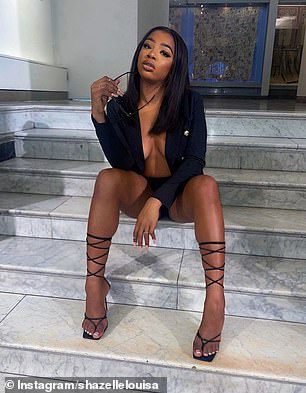 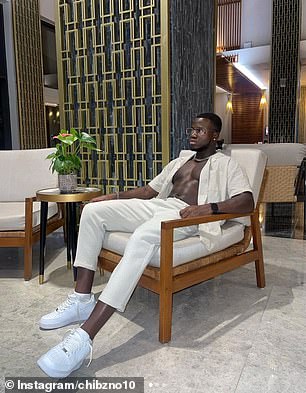 Personal trainer Chibz, 23, from London, first connected with receptionist Shazelle, 21, two years before the show after Chibz noticed her on Instagram 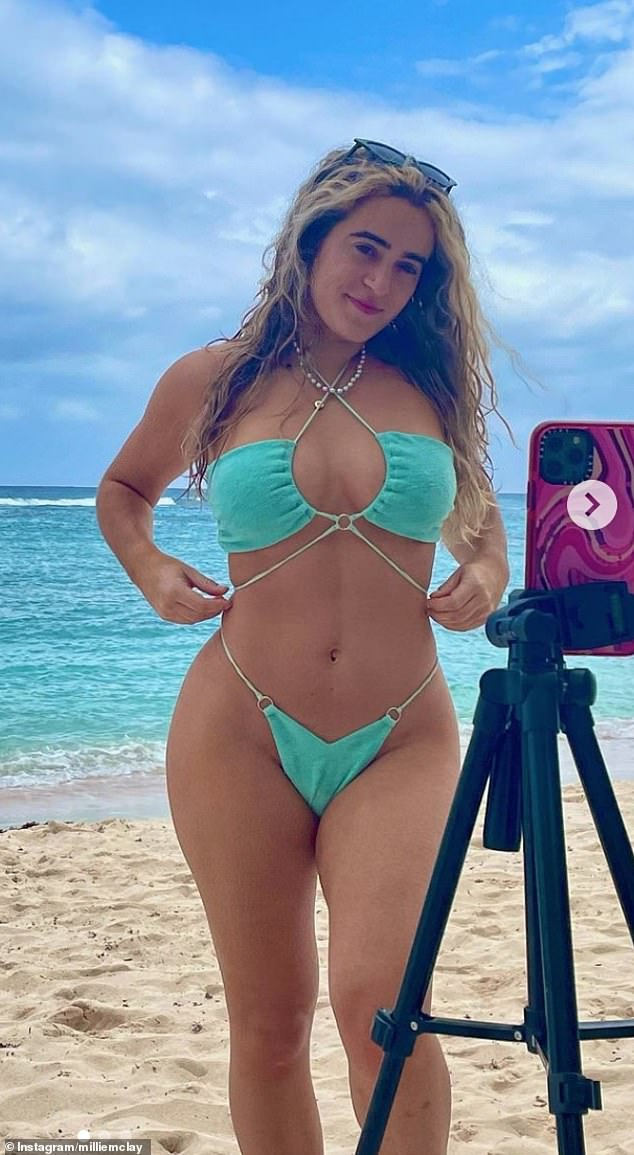 Millie, 23, from London, had an accident with a horse that resulted in five surgeries, calling a rapid halt to her plans to meet online girlfriend Shelby 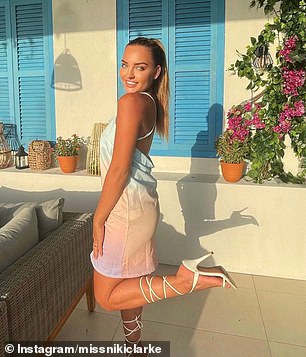 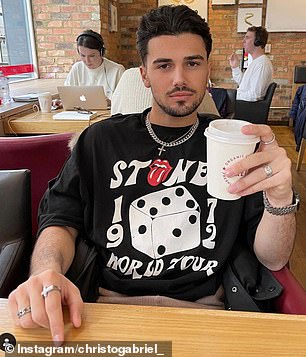 Viewers are introduced to Christos and Niki, who first connected online three months ago when she followed him on Instagram, however hadn’t met due to the three hour distance between them

Having started their relationships through apps, stories and DMs, some couples had  been chatting for years whilst others had only been flirting for months or weeks.

Viewers were introduced to Christos and Niki, who first connected online three months ago when she followed him on Instagram. However, they hadn’t met due to the three hour distance between them.

Restaurant manager Christos, 19, from Worcester, spoke to carer Niki, 22, from Brighton, at least three times a day ahead of the programme – and had even FaceTimed his online girlfriend’s family.

Influencer Millie, 23, from London, first connected with NHS worker Shelby, 24, 10 months before appearing on the show.

The pair had tried to meet up in person prior to the show. However, Millie had an accident with a horse that resulted in five surgeries, calling a rapid halt to their plans. 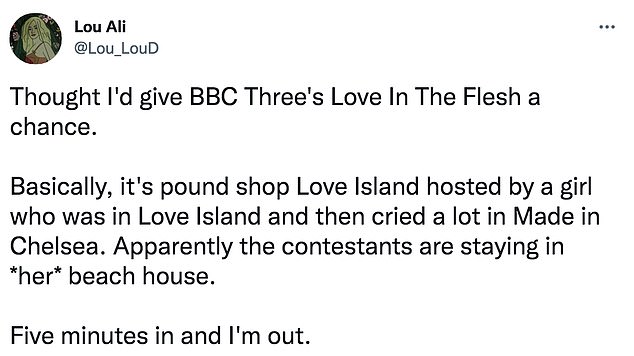 Many called the show a ‘knock off Love Island’, while others criticised the concept of show, pointing out that while the couple’s had never met in real life, they all ‘happen to look like hired models’

Legal assistant Hannah, 24, from Huddersfield, started speaking online with 23-year-old student Brandon, from Sheffield after connecting on a dating app six months before the show.

Personal trainer Chibz, 23, from London, first connected with receptionist Shazelle, 21, two years before the show after Chibz noticed her on Instagram.

But the two faced difficulties before appearing on the show, with London-based Shazelle standing him up on the two dates they had previously arranged.

The longest online relationship belonged to Jess and Kwame, who had been speaking for five years before appearing on the show without even FaceTiming each other.

Carer Jess, 24, from Hertfordshire, chatted with entrepreneur Kwame, 28, from London every single day ahead of the programme – but admitted to thinking her online boyfriend could have been a catfish.

Love Island star Zara, who hosted various BBC documentaries ahead of landing the gig, said of the show: ‘Making Love In The Flesh was an incredible experience and being able to present this show is an absolute dream come true for me.

A return to screen: The fall and rise of BBC Three

2003: BBC Three launched and is charged with reflecting and stimulating the ‘diversity of the UK’ and creating programmes that covered a range of subjects, including science and international affairs

March 2014: BBC announces plans to move the channel online, with initial reports saying it would be online by early 2016

Reports said the BBC would be saving around £30 million through the move.

The news of the move to online sparked various reactions, notably a protest outside the BBC’s Broadcasting House.

More than 300,000 people signed a petition to save the channel on change.org.

March 2016: BBC Three comes off air and moves online-only, with shows available to watch on the iPlayer platform.

It says it is committed to doubling the investment on BBC Three commissions over the next two years, following the success of shows including Normal People and Fleabag.

The watchdog says the relaunch will help the BBC reach younger viewers, particularly those from lower-income homes and those living outside London and the South East

It stipulates the BBC must ensure that at least ’75 per cent of hours broadcast each year must be original programmes’, as commissioned by the corporation for a UK viewing audience

The channel will kick off with a BBC Three Launch Party, followed by a double bill of reality TV show Eating With My Ex and the premiere of RuPaul spin-off show RuPaul’s Drag Race: UK Versus the World

‘It truly reflects the current dating climate for young people that are living in a digital age and constantly glued to screens.

‘This show is about interrogating how far online chemistry can go without that in-person connection – someone could be hugely flirty and forward online, but when you meet them, they could be super shy and quiet!

‘I loved meeting the couples for the first time, some had been speaking online for YEARS and the emotion and anticipation behind each of those moments was incredibly touching and watching those relationships cross from digital to real life with my very own eyes was really magical.

‘ I’m really glad to be part of a series that tells some amazing stories and gives our couples the chance to take the plunge with relationships that otherwise may never have come to existence. I’m sure the audience will connect with many of the stories in the same way that I did.’

BBC Three is home to hits like Normal People, Fleabag and Killing Eve but in the past has been a hub for downmarket reality TV programming like Eating With My Ex, Don’t Tell the Bride and Sun, Sex and Suspicious Parents.

The channel’s return as a broadcast TV channel was confirmed by Ofcom in November last year.

The broadcasting watchdog approved the move to take the online-only channel, currently available on the iPlayer, back to linear services in early February.

In 2016 the corporation took BBC Three off air because it said young viewers had abandoned traditional viewing, despite it being the home of hits such as Gavin and Stacey, Fleabag and Killing Eve

That sparked a protest outside Broadcasting House and more than 300,000 people signed a petition to save the channel.

Then as the pandemic hit in March last year and BBC Three spawned another hit with Normal People, the corporation said there was still a ‘significant group of younger viewers who maintain a strong linear TV habit’ and announced plans to bring it back as a TV channel, subject to Ofcom’s approval.

The decision by Ofcom to bring the channel back, which coincided with the publication of the regulator’s annual report on the BBC’s performance, said the relaunch would help the BBC reach younger viewers, particularly those from lower-income homes and those living outside London and the South East.

It said that to ensure the channel is distinctive’, at least 75% of its broadcast hours must be original programmes commissioned by the BBC for UK viewers.

‘This is a big moment, with the new channel providing a destination for young audiences to discover more content on the BBC.

‘We will work hand in hand with iPlayer to provide a broad offering that is representative of the whole of the UK and we will continue to back new talent and bold ideas.

‘This approach will bring the audience a distinctive mix of programmes that are there to entertain, inspire and challenge thinking, at a pivotal and exciting time to be young in the UK.’