After their plan to host their wedding at Chequers was hurriedly scrapped in the wake of Boris Johnson’s resignation, the outgoing Prime Minister and his wife were forced to scramble for a backup venue.

Fortunately help was at hand in the form of Conservative party donor Lord Bamford, who has reportedly offered up his private Cotswolds estate for the occasion.

Boris, 58, and Carrie, 34, are preparing to toast their marriage this weekend in a marquee erected in the grounds of Grade I listed Daylesford House, near the village of Stow-on-the-Wold, Gloucestershire.

It is just 30 miles from Mr Johnson’s private country home in Thame, Oxfordshire. 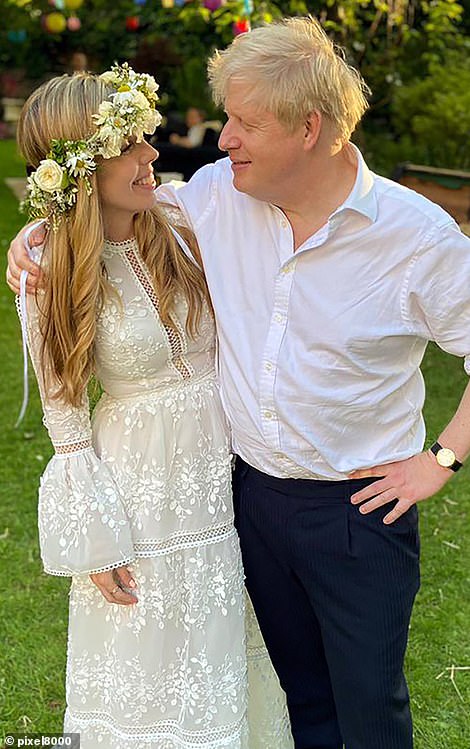 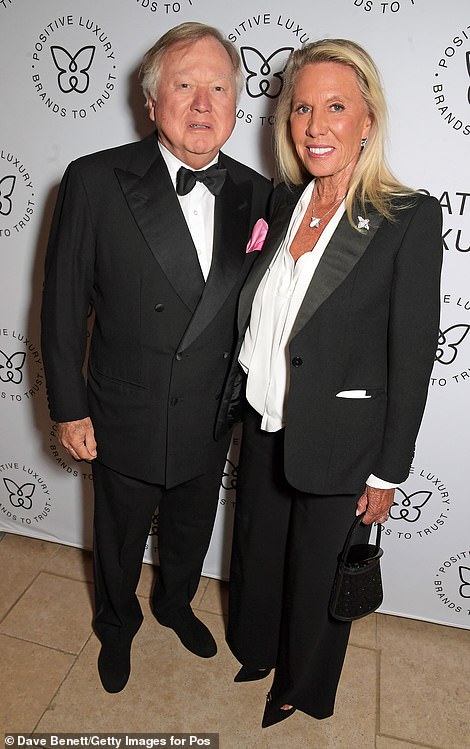 Saving the (wedding) day: Conservative party donor Lord Bamford (right with his wife Lady Bamford) stepped in to offer his private country pile to Mr and Mrs Johnson for their belated wedding celebration. Left, the couple at their 2021 wedding 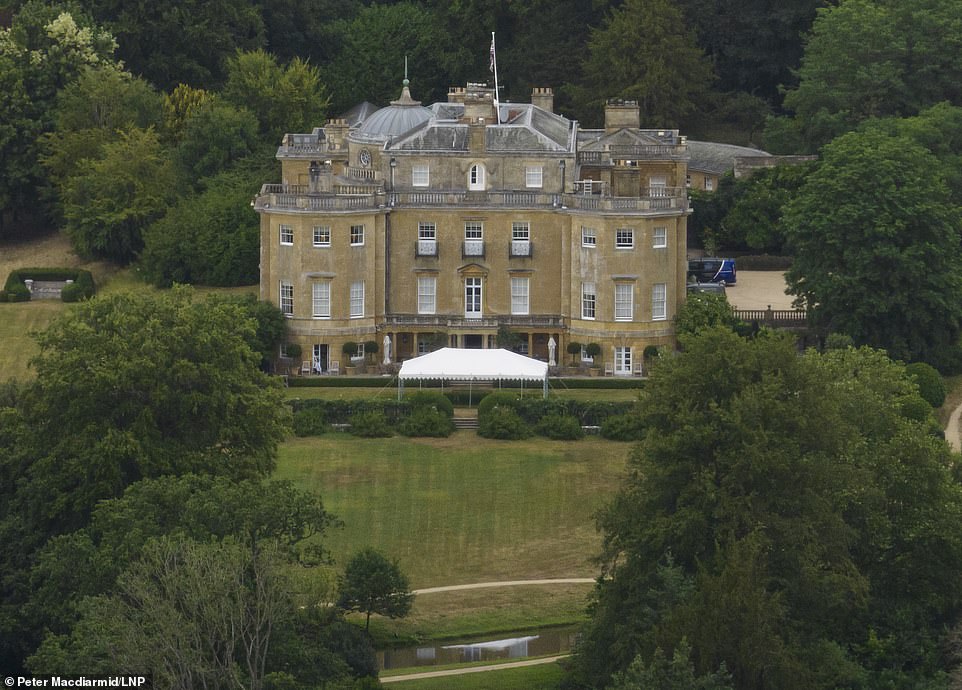 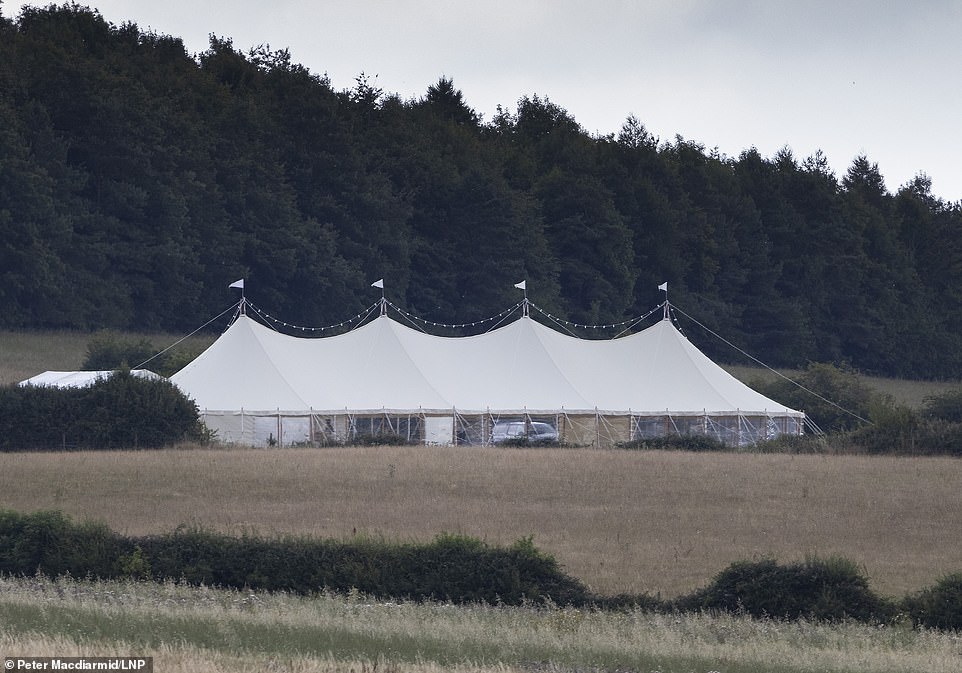 Country wedding: Boris, 58, and Carrie, 34, are preparing to toast their marriage this weekend in a marquee erected in the grounds of Grade I listed Daylesford House, pictured, near the village of Stow-on-the-Wold, Gloucestershire

The couple tied the knot in a secret ceremony at Westminster Abbey in May 2021, followed by a small reception in the garden at No. 10. Just a handful of guests was allowed due to Covid-19 restrictions that restricted weddings to just 30 people.

The couple had planned to toast their marriage at a party at Chequers, the Prime Minister’s grace-and-favour country home, this month but have been forced to change their plans following Mr Johnson’s resignation.

Daylesford House, which is just a mile from Lord and Lady Bamford’s organic farm of the same name, boasts 1,500 acres of manicured gardens including pristine lawns, an 18th-century orangery and a secret garden – complete with hexagonal swimming pool, shell grotto and alfresco pizza oven.

Downing Street said: ‘We do not comment on speculation regarding private or family matters which do not involve any ministerial declarations or taxpayer funds.’

There is no doubt their host has pulled out all the stops for the big day.

JCB chairman Lord Bamford has given about £14million to the Conservative party since 2001 and has been a supporter of Mr Johnson since the pair were involved together on the Vote Leave campaign in 2016.

Mr Johnson chose the JCB headquarters as the setting for his speech signalling his intention to run for Prime Minister. He visited the company’s Staffordshire factory during the 2019 campaign. 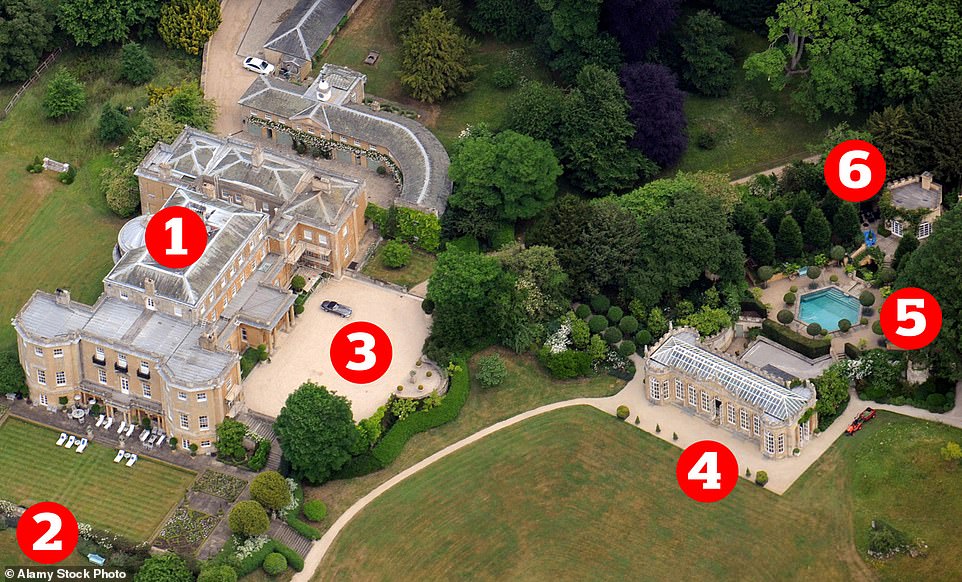 Country retreat: Grade I listed Daylesford House in Gloucestershire. Pictured: 1. The mansion built for the first Governor-General of India in the 1790s; 2. The south-facing lawn with box parterre; 3. Terrace looking out to the orangery; 4. The Grade II listed 18th century orangery; 5. A hexagonal pool in the Millennium Garden; 6. A grotto and pizza oven for dining al fresco

1. Grade I listed mansion: Daylesford House was built for the first Governor-General of India in the 1790s. Back then, its walled garden and glasshouses would grow mangoes and papayas to remind the master of the house of life in Bengal. 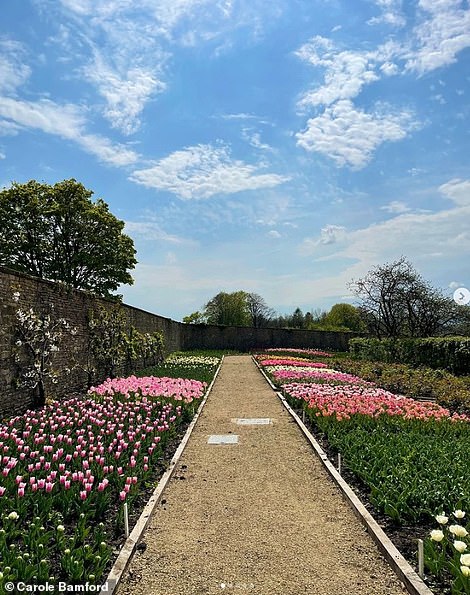 Pride and joy: Lady Bamford shared this photographs of her beautiful tulips in one of the walled gardens at Daylesford

Today, the estate generates organic food for the chain of farm shops and cafés created by Carole Bamford.

Since she moved here in 1974 with her husband, JCB heir Anthony Bamford, Lady Bamford has revived and expanded the exquisite garden. Although maintained as a private property, the Bamfords throw open their garden gates to the public once a year.

2: South-facing lawn: Steps lead up to the 50m x 20m balustraded South Terrace. At each corner of the lawn there is a box parterre. Like the house and the Orangery, the South Terrace looks down a shallow wooded valley with pools, walks, and planting.

3. Terrace: Looking out towards the Orangery is a second terrace which is being used as parking for suppliers ahead of the big day.

4. 18th century orangery: The impressive orangery was constructed in 1789–90 to designs by John Davenport.

The seven-bay building is constructed from ashlars, with tall pointed windows facing south over the park, a pediment above the central three bays, round wings at either end, and battlements with pinnacles.

5. & 6: Secret garden with grotto, pizza oven and hexagonal pool: The Millennium Garden behind the Orangery contains a shell grotto with a flight of steps leading down to a hexagonal pool surrounded by statuary and parterre beds. There is also reportedly a pizza oven, making it the ideal setting for al fresco dining.

Organic food from their favourite takeaway 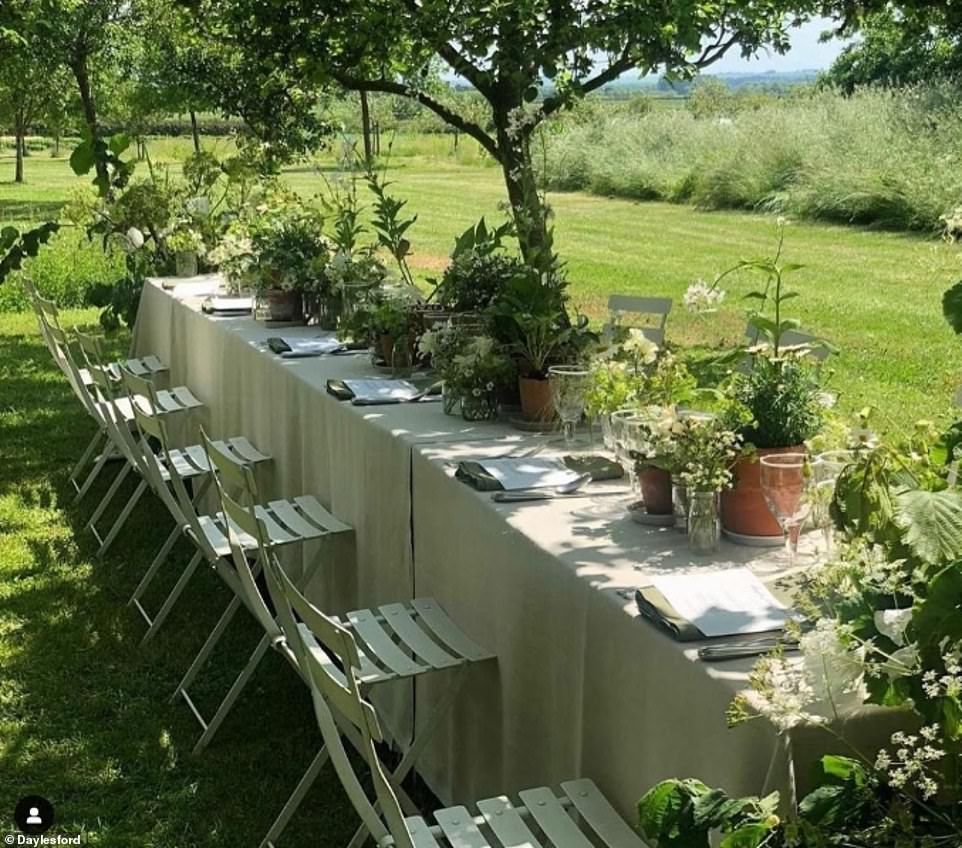 Rustic chic: Just a stone’s throw from Daylesford House and Gardens is the Bamfords’ Daylesford estate which serves as a wedding venue. Pictured, a table set up in the grounds of Daylesford Organic Farm which could inspire Boris and Carrie 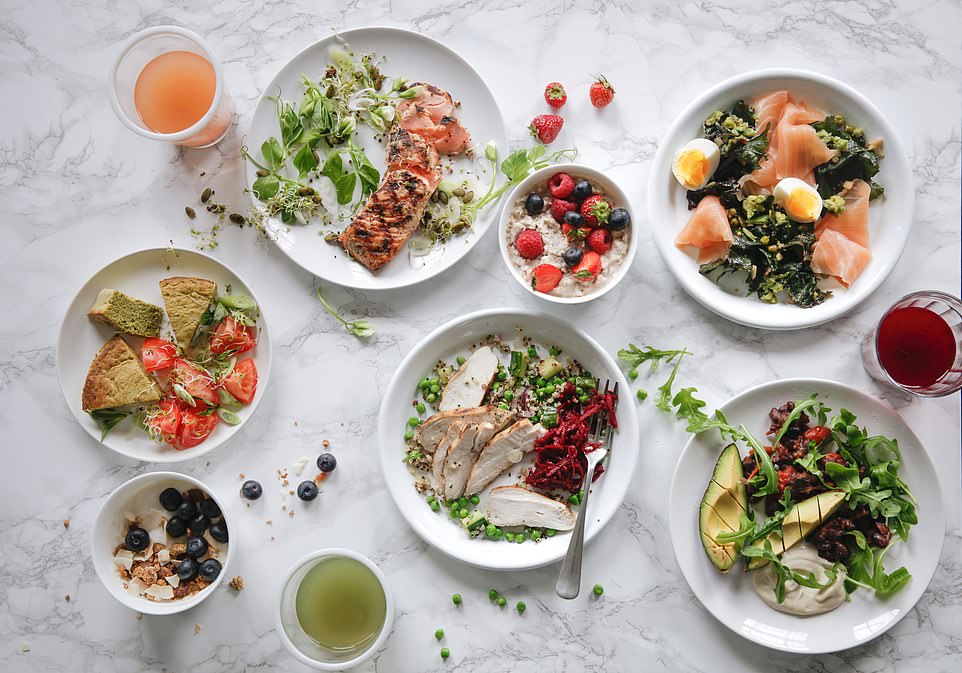 Yummy Mummy meal: Daylesford Organic Farm kept Carrie and Boris topped up with £27,000 of healthy takeaways during lockdown. Pictured, a selection of the Daylesford To Go range previously sold at the farm shop 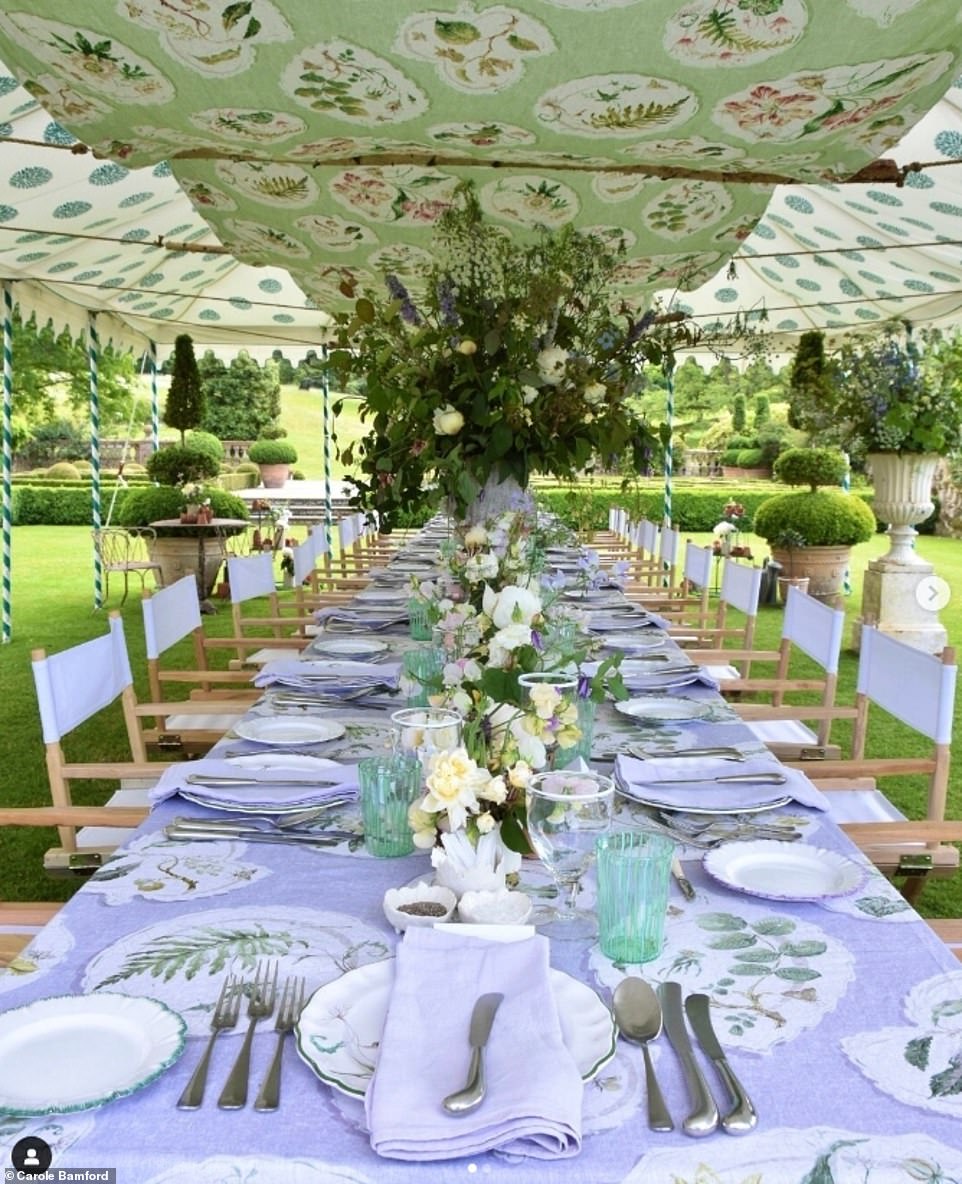 Attention to detail: Lady Bamford shared this photograph of a simple yet elegant lunch in the gardens of Daylesford House. It is possible the hostess could lend her talents to Carrie Johnson and help pull together stylish tables for the big day

Little extras: Carrie could use Daylesford’s florist and stylists

Daylesford is a one-stop wedding shop, offering couples everything from spa facilities to a florist. Carrie might want to make use of her connections and call in some assistance via Lady Bamford.

The florists craft bridal bouquets using the freshest blooms, many of which are taken from the organic Cutting Garden.

Daylesford also has an in-house stylist who can arrange everything from personalised dressing gowns to embroidered napkins, and recommendations for DJs, photographers and musicians.

Just a stone’s throw from Daylesford House and Gardens is the Bamfords’ Daylesford estate, home to the organic farm shop that kept Carrie and Boris topped up with £27,000 of healthy takeaways during lockdown.

It also serves as a wedding venue, with couples able to exchange vows in either the Chelsea Garden Room or the light-filled Glasshouse.

A reception of up to 200 guests can be held in one of Daylesford’s many indoor and outdoor spaces.

Brides and grooms can opt to erect luxury tents in the back garden, or have long, banquet-style dining tables set up in the converted Cotswolds stone farm buildings.

While Boris and Carrie will not be hosting their wedding on site, they could still draw inspiration from Daylesford Organic Farm’s signature rustic chic aesthetic.

They might opt for trestle tables covered with soft neutral linen fabrics and decorated with simple tonal floral displays.

The events team at Daylesford sometimes uses flower pots instead of vases – a quirky touch which might appeal to the Johnsons.

Of course, one of the big draws of hosting a wedding at Daylesford is access to the talented chefs and deliciously fresh organic ingredients that has made the name famous.

Guests can choose to have a relaxed feast of sharing platters, food from sizzling fire pits, or served out of a retro airstream trailer.

The adorable Bottoms Up bar makes the perfect refreshment stop in the garden.

Carrie is said to be a fan of Negroni cocktails – made of one part gin, one part vermouth rosso, and one part Campari, garnished with orange peel – so they could be on the cards for the drinks reception.

The Wild Rabbit pub also serves organic food from the farm, should couples want to host an intimate reception.

Given Carrie and Boris’ love of Daylesford food, it is almost certainly in the running as wedding caterer.

Give their guests a good night’s sleep 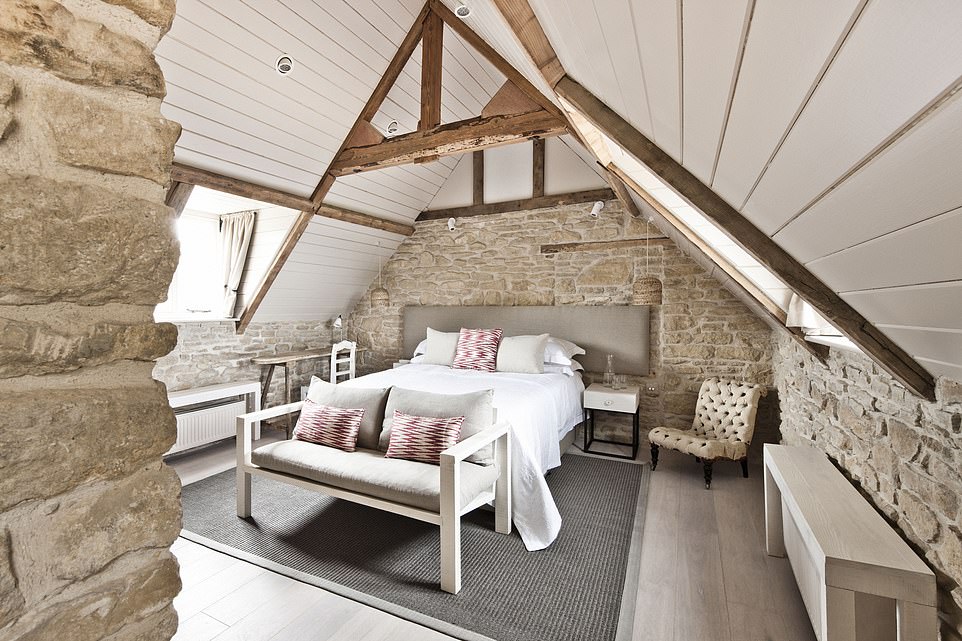 Escape to the country: There is every chance Boris and Carrie will have recommended their loved ones book out the holiday cottages dotted on the Daylesford estate. Pictured, one of the welcoming bedrooms inside Daylesford Cottages

After a countryside wedding, there is nothing worse than traipsing for miles to the nearest B&B or luxury hotel.

So there is every chance Boris and Carrie will have recommended their loved ones book out the holiday cottages dotted on the Daylesford estate.

All cottages come with a complimentary welcome back of Daylesford bread, eggs, milk, butter & Léoube rosé, and access to the stunning countryside around the estate.

There are also 13 rooms in the estate’s The Wild Rabbit pub which would offer a cosy retreat at the end of a long day of partying.

The estate also has the benefit of the Bamford Wellness Spa – a must for a rejuvenating pre-wedding facial –  and the award-winning Cookery School, which could be a fun activity for guests to try the day after the wedding. 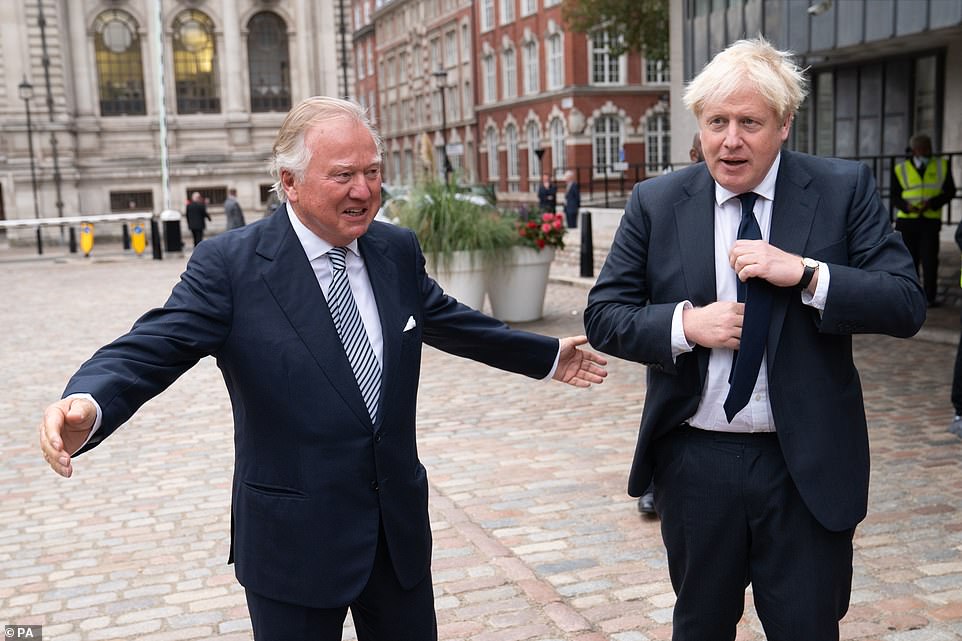 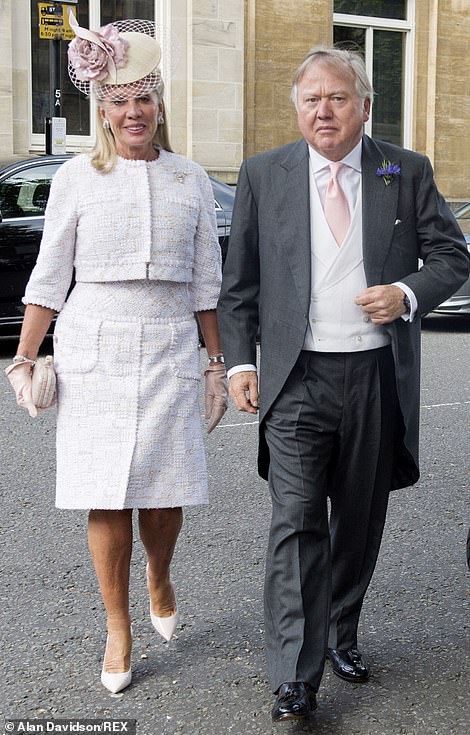 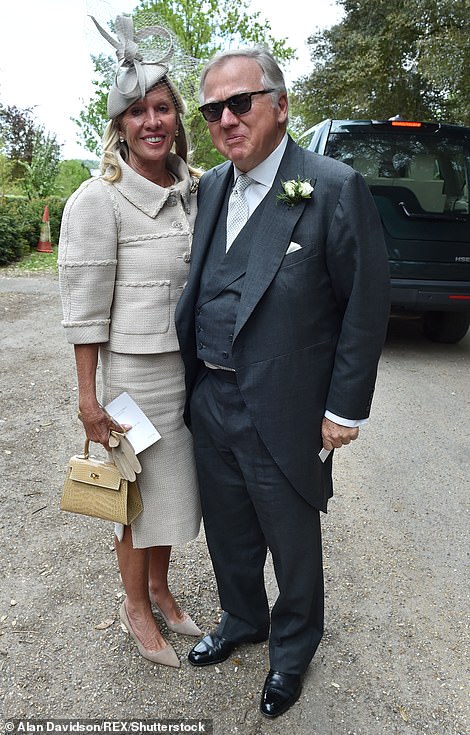 Billionaires: Lord Bamford, 76, is one of Britain’s most successful industrialists and his fortune has been estimated at £4.6billion. He and his family have close ties to Mr Johnson dating back several years. Pictured, Lord and Lady Bamford 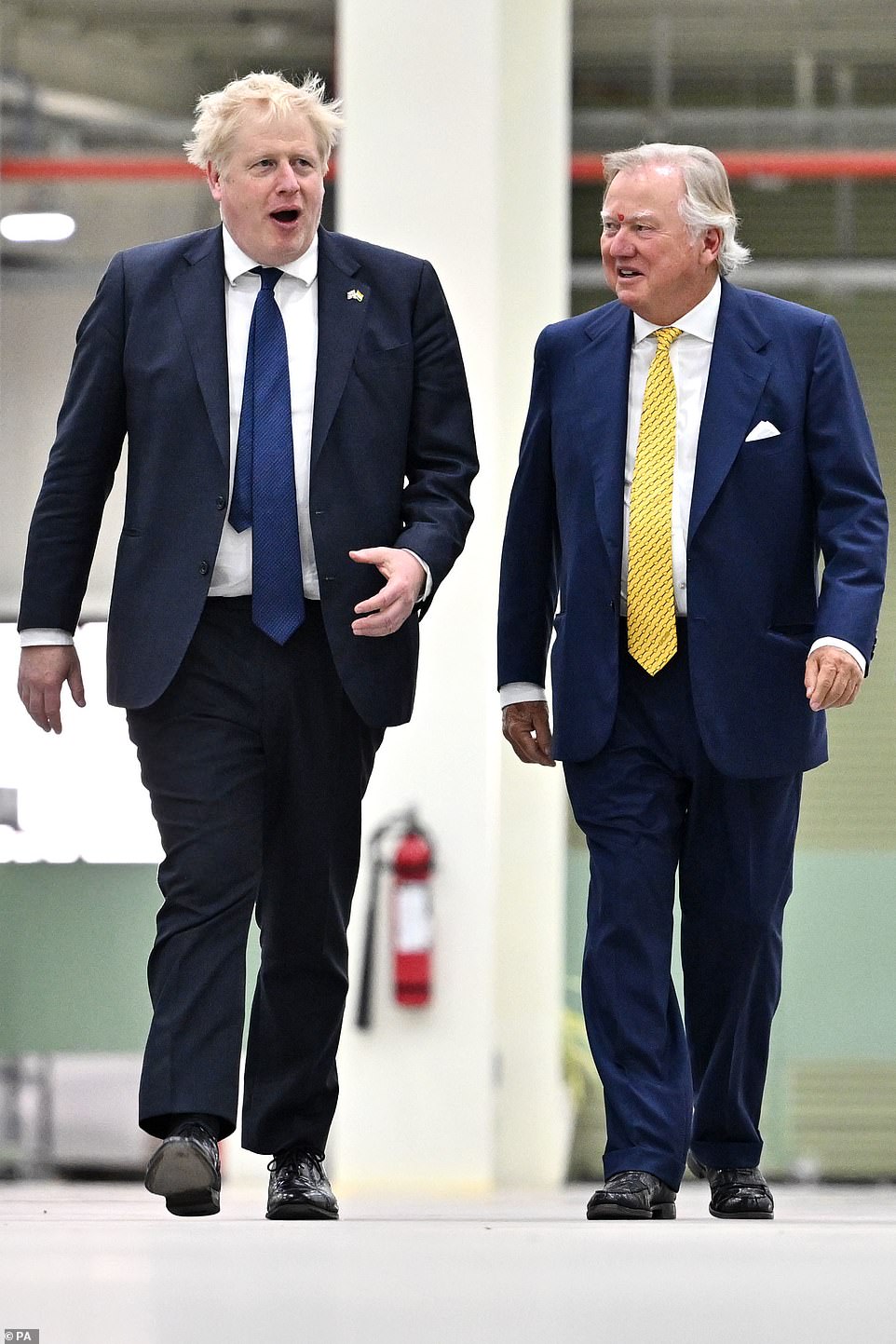 Mutual support: Lord Bamford has given about £14million to the Conservative party since 2001 and has been a supporter of Mr Johnson since the pair were involved together on the Vote Leave campaign in 2016. Pictured, Mr Johnson during a visit to a JCB factory in India in April this year

Lord Bamford, 76, is one of Britain’s most successful industrialists and his fortune has been estimated at £4.6billion. He and his family have close ties to Mr Johnson dating back several years.

Lord Bamford has given about £14million to the Conservative party since 2001 and has been a supporter of Mr Johnson since the pair were involved together on the Vote Leave campaign in 2016.

According to the Commons Register of Interests, Lord Bamford and his JCB firm bankrolled Mr Johnson to the tune of £160,000 in 2019.

While a backbench MP, Mr Johnson chose the JCB headquarters as the location for his ‘comeback’ speech in which he announced his intention to run for Prime Minister.

The future Prime Minister also visited the JCB factory in Uttoxeter, Staffordshire during the 2019 election campaign.

The PM famously used the trip to crash a digger, with ‘Get Brexit done’ emblazoned on it, through a fake wall marked ‘gridlock’ as he drummed up support for his EU exit plan.

He has also showed his support by making a number of public visits to JCB projects, including a visit to a JCB factory in India in April.

During the pandemic, the Johnsons dined in style thanks to a secret £12,500 gourmet food supply from Daylesford organic, which is owned by Lady Bamford.

Lady Bamford founded Daylesford over 40 years ago, when she began converting her family’s farmland to produce organic food to improve her children’s diets.

It is now dubbed the most sustainable – and poshest – farmshop in Britain and has become a lauded example of eco-farming across the globe, a subject close to the heart of passionate environmental campaigner Mrs Johnson.

Lady Bamford was awarded the OBE for ‘services to children and families’.