Dermot O'Leary reveals he 'was a partner of a fish restaurant'

A study of 2,000 diners, by comparethemarket.com, revealed 34 percent believe you should split the bill straight down the middle including the tip, while 36 percent reckon it should be split precisely based on who has had what. Nearly half (43 percent) are left feeling awkward when it comes to approaching how to pay when they eat out. But eight in 10 (80 percent) wouldn’t let such experiences put them off heading back to restaurants as they continue to reopen.

However, love it or hate it, 63 percent said splitting the bill is all part of the eating out experience.

Julie Daniels, head of rewards at comparethemarket.com said: ‘’Splitting the bill often divides opinion, as our research shows. But one thing is for sure, people are looking forward to dining out again and plan to make up for lost time.

‘’As restaurants continue to reopen their doors, we have expanded our Meerkat Meals reward to give our customers even more choice and to make splitting the bill a little easier.”

It also emerged 42 percent have agreed to pay more than they wanted to avoid an uneasy situation, while the same amount have also done it simply to look good.

And nearly one in five (19 percent) have left a bigger tip to cover off an uncomfortable payment experience. 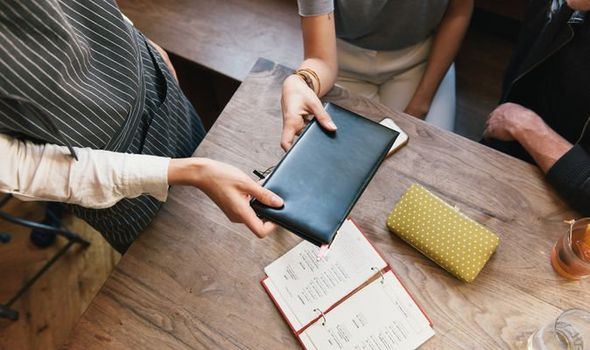 While 20 percent have actually paid in full on behalf of others to dodge the awkwardness entirely.

More than a quarter (26 percent) had been involved in a disagreement over whether to leave a tip – with the average being left for restaurant staff being £8.25.

The average respondent has had to wait an excruciating six minutes and 45 seconds to settle a bill, with more than half (52 percent) having felt embarrassed by the actions of those who they’ve dined out with when sorting payment.

Yet 65 percent have used, or experienced someone calculating their total from a bill using a calculator or phone app.

The study also found 13 percent have fallen out with someone over quibbling over the bill as 29 percent have had to apologise over how long the bill is taking to be resolved.

Friends (28 percent) were those most likely to nit-pick over payment with 16 percent experiencing it with colleagues.

Despite this, 52 percent are looking to make up for lost time when it comes to eating out as restrictions ease as 13 percent would even go as far as to say they missed such moments.

Julie Daniels from comparethemarket.com added: “Hopefully splitting the bill will be a little easier as, in addition to 2 for 1 on selected food, at participating restaurants from Sunday to Thursday, Meerkat Meals now includes 25 percent off the entire bill at a number of venues on various days of the week, with deals available at chain favourites and local independents, via the Meerkat app.’