Cheers and smiles as the ACO returns to the stage

Greeting cheers with beaming smiles, the Australian Chamber Orchestra led the post-lockdown return to the City Recital Hall with golden sounds and energised virtuosity from the baroque, subtly offset with 19th, 20th and 21st century reflections on that Arcadian age, like dwindling dances from a dying planet.

Technically, Ensemble Offsping’s stimulating October program from the Opera House beat them back to the concert stage. But of course, it’s not a race. 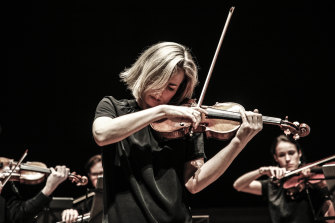 Satu Vanska, pictured, and Helena Rathbone played from opposite sides of the stage with cello and continuo in the middle.

ACO director Richard Tognetti’s programming mixed complete works by Vivaldi, Leonarda, Handel and Bach with smaller excerpts, sometimes blended without a break. Vivaldi’s violin concerto in D major Grosso Mogul started with its second movement, with arresting tremolos and improvisatory expressiveness from Tognetti before virtuosic playing from him and Satu Vanska in the last movement.

Cellist Timo-Veikko Valve gave us only the prelude from Bach’s Cello Suite No. 4 in E-flat with carefully separated phrases that nevertheless preserved voice-leading continuity before a beautifully hushed and fragile evocation of mythical Britain in Thomas Ades’s O Albion. Attaching part of an arrangement of Bach’s famous Chaconne for Solo Violin to this, however, didn’t really do justice to the latter work.

For a Trio Sonata Opus 16, No. 10 by 17th century composer Isobella Leonarda, Vanska and Helena Rathbone played from opposite sides of the stage with cello and continuo in the middle, creating wonderfully sunny textures and buoyant rhythm. A seamless transition into Steve Reich’s Duet (1994) connected the glowing sound of two violins as imagined over three centuries apart.

In Summer from Vivaldi’s The Four Seasons, Tognetti cultivated a sound of smouldering fieriness, the orchestra playing with incisive drama. In the second half, Handel’s Concerto Grosso in D major, Opus 6, No. 5 was sharply and stylishly articulated, with an allegro of exciting momentum and a menuet of serene grace.

This complete work was framed by three movements from Grieg’s Holberg Suite, glimpsing the baroque from the 1880s, and the numinous Apotheosis from Stravinsky’s Apollon musagete. After a Finnish version of the so-called Passion Chorale sung by Vanska and an arrangement of Bach’s Erbarme dich, the ACO ended with lightness and brilliance in Bach’s Brandenburg Concerto No. 3 in G, framing a thoughtfully improvised slow movement with outer movements of breathless nimbleness and delight.

Continues at the City Recital Hall, November 16 and 17

The Booklist is a weekly newsletter for book lovers from books editor Jason Steger. Get it delivered every Friday.