Premier Daniel Andrews directly courted some of China's biggest Belt and Road Initiative companies, including one subsequently blacklisted by the US government, to help build Victoria's huge pipeline of infrastructure projects including his signature Suburban Rail Loop.

Internal documents obtained under the freedom of information act show Mr Andrews pitching for money and expertise from Chinese state-owned companies in his trip to China in October last year, with a promise to "facilitate" their access to Victoria and "collaborate" on the state's biggest projects.

Victoria, he said, would become “China’s gateway to Australia”. 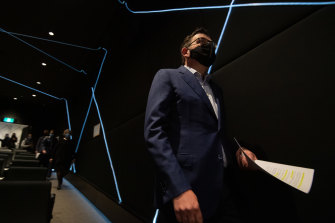 Daniel Andrews has defended his dealings with China.Credit:Eddie Jim

Among the projects the Premier listed were the uncosted but multibillion-dollar Suburban Rail Loop, the North East Link road project and the Airport Rail Link.

The details of Mr Andrews' pitch to China come amid deteriorating relations between Canberra and Beijing over trade, and as the Morrison government announced it would legislate to cancel any agreement between states and a foreign power deemed to challenge national security.

The $1 trillion Belt and Road Initiative is Chinese President Xi Jinping's signature policy to invest in infrastructure globally including roads, rail, pipelines and telecommunications systems. But western governments, including Australia and the United States, increasingly view it as a foreign policy and propaganda tool, as well as a potential debt trap for developing nations.

The federal Labor opposition also rejects the idea of Australia signing up to the Belt and Road Initiative, but Mr Andrews insisted again on Friday that he was committed to it and the relationship with China after signing a Memorandum of Understanding on the project in 2018. 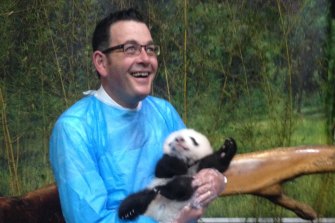 "You will find the Victorian market accessible, and my government will welcome your participation and do what it can to facilitate success," he said.

During the meetings, Mr Andrews told Chinese officials that his government was spending more on infrastructure than the Commonwealth was for the rest of the country.

The meeting with companies, including CCCC bidding on projects, prompted a probity warning to Mr Andrews with a request he not discuss specifics of the North East Link procurement process and that he have two Victorian officials by his side at all times to record discussions.

“It is recommended that you offer similar meetings with the relevant global heads of other constructors that are also in bid teams,” his department advised. 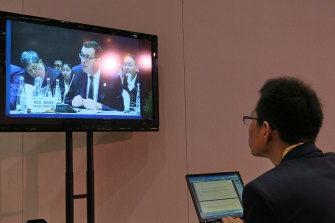 Daniel Andrews giving a speech at the parallel sessions of the Belt and Road Forum in Beijing in 2017. Credit:Sanghee Liu

A spokesman for DFAT said the federal government was not consulted nor given the opportunity to comment on Victoria's signing of the Framework Agreement with China last October.

Victorian Treasurer Tim Pallas rebuked Mr Morrison earlier this year for “vilifying” China after he called for a probe into China’s handling of the initial coronavirus outbreak.

Rory Medcalf, head of the national security college at the Australian National University, said on Friday that the Belt and Road Initiative was so important to China’s quest for global influence that it was broadly beyond the ability of state and local governments “to play in that space without clear consultation at a national level”.

Professor Medcalf said although the language in Victoria’s agreements with China was innocuous, the apparent unquestioning involvement of first world governments such as New Zealand or Victoria made it harder for poorer nations to protect their interests.

China was likely to continue to invest in projects in Australia without governments’ signing up to the Belt and Road Initiative, he said.

But the former secretary of Australia’s defence department, Paul Barratt, said Australia should have been a signatory to the Belt and Road when it was first proposed by China in 2013 because it was our largest trading partner.

"It’s not our enemy. The agreement is non-committal and you just examine issues case by case,” said Mr Barratt, now an adjunct professor at the University of New England.

The documents also give an insight into the negotiations over the wording of the Framework Agreement signed by Mr Andrews last October, including China’s insistence it specifically mention co-operation on aged care.

Life expectancy in China has increased markedly with improved living standards, making aged care a priority for the world’s most populous nation.

Despite disclosing some material related to Victoria’s BRI interactions with China, Mr Andrews’ department chose to withhold a small amount of documents and blacked out key passages from other documents.

A letter from Mr Ning was exempted from release under FOI on the basis it would disclose confidential information from a foreign government. Six other documents were redacted in order to protect recommendations, advice or opinions expressed to the Premier by his advisers.

Our weekly newsletter will deliver expert analysis of the race to the White House from our US correspondent Matthew Knott. Coming soon. Sign up now for The Sydney Morning Herald‘s newsletter here, The Age‘s here, Brisbane Times‘ here and WAtoday‘s here.