The Andrews government is set to consider scaling back the powers of the state’s unelected Chief Health Officer and giving the Health Minister greater control over public health orders to manage the COVID-19 pandemic.

Almost two years into the crisis, as the state prepares to ease restrictions and learn to live with the virus, Labor MPs are now asking when elected officials will get the ultimate power to sign off on public health orders. 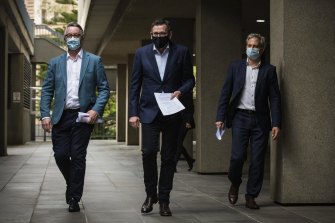 The Andrews government is set to consider scaling back the powers of Chief Health Officer Brett Sutton. Credit:Darrian Traynor

“We were elected to govern, elected to make decisions and that’s what we should be doing,” one MP said.

As part of its plan to permanently replace the controversial state of emergency legislation, which expires on December 15, the state government has been drafting specific pandemic laws which are set to be introduced to Parliament within weeks.

A group of government MPs confirmed to The Sunday Age one of the changes to be considered was giving the Health Minister sole authority to sign off on public health restrictions – powers which currently rest with Chief Health Officer Brett Sutton.

“It’s appropriate that ultimately, decisions are made by the people who’ve been put in charge by the community,” another Labor MP told The Sunday Age on the condition of anonymity to discuss internal conversations.

“The public health [advice] is going to be incredibly influential … but it does mean that it’s advice rather than decision-making and that’s an important distinction.”

The state of emergency gives Professor Sutton the power to make legally binding directives to manage the public health crisis, such as mandatory mask-wearing, bans on mass gatherings, and which industries have “authorised workers” permitted to leave home to go to work.

Some in the government have linked Victoria’s more conservative approach to easing restrictions, compared with NSW, to the way the state of emergency powers work in the two states.

NSW has hit the 70 per cent double-dosed vaccination target and from Monday will allow 10 people to gather in homes. In Victoria, indoor private gatherings will not be allowed until 80 per cent of the eligible population is fully vaccinated.

Venues will also be allowed to reopen indoors at 70 per cent in NSW, while that will not be permitted in Victoria until 80 per cent.

Professor Sutton has the authority to make legally binding directives for Victoria. In NSW, that power lies with Health Minister Brad Hazzard.

Over the course of the pandemic, there has been friction between Professor Sutton and the government over the level of restrictions, with ministers trying to chart a path to freedom for lockdown-weary Victorians having faced significant uphill battles at times.

Education Minister James Merlino, for instance, successfully pushed for some students to return to school at the start of term four, despite Professor Sutton advising he preferred to do so once the state approached the 80 per cent double-dose vaccination target in November.

In the middle of this year, there was also intense debate over whether Melburnians should be allowed to travel to ski fields. Professor Sutton was of the view that travel should not be allowed but the government reached a compromise to permit skiing trips as long as people were tested for COVID-19.

The Public Health and Wellbeing Act, the law under which a state of emergency was first declared on March 16, 2020, contained a six-month limit. The government successfully passed legislation to extend the powers for an extra six months, and then a further nine months.

The MPs who want the Chief Health Officer’s state of emergency powers given to ministers – as is the case in other states and territories – argue that under the Westminster system, politicians who are accountable to the public, should have ultimate responsibility to make laws that affect people’s lives.

Opposition Leader Matthew Guy agrees. He says the government – not public servants – should take responsibility for managing the pandemic. 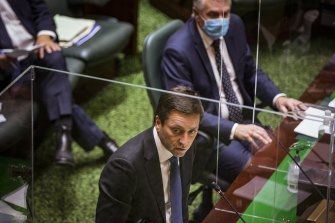 Opposition leader Matthew Guy has backed calls to give the Health Minister the power to make public health orders to manage the pandemic. Credit:Chris Hopkins

“Those who make these decisions – politicians – should be ultimately accountable for them,” Mr Guy said this week.

“As a general principle, I think [public health orders] should be ticked off by a minister or the Premier.

Monash University associate professor of politics Paul Strangio, who commented in general terms, said giving the Health Minister the power to make public health orders would be more consistent with the Westminster system.

“An unelected official, even with the best of goodwill, is not accountable to either the Parliament [or] the people … and this goes against the grain of the principle of government.”

Some government MPs believe the Chief Health Officer should continue to have the power to make the directions, saying the existing arrangements “had kept the state in good order”.

“If you put this into the context of another emergency, a bushfire for example, do you want the minister in charge of how we operationally respond? I don’t think that’s appropriate,” one MP said.

The Human Rights Law Centre has called for Victoria’s new pandemic legislation to ensure Parliament can scrutinise the government’s pandemic response; allow for an independent review of all public health directions; and stronger safeguards around police powers.

A Victorian government spokeswoman said work on the legislation was ongoing, and the government was looking at arrangements in place in other states and in New Zealand.

”Following the state of emergency extension passed in March, we committed to developing new legislation to support Victoria’s ongoing response to the pandemic as we open up steadily and safely under the road map,” she said.

Stay across the most crucial developments related to the pandemic with the Coronavirus Update. Sign up to receive the weekly newsletter.