No prime minister has experienced such a rapid rise and suffered so spectacular a fall as Liz Truss: The shortest and most dramatic tenure of office in history.

She blamed economic ‘instability’ for her failure, but it was the destabilising spectacle of her own collapsing Government that finally destroyed her.

When she emerged to make her resignation statement at 1.30pm yesterday, only her husband, Hugh O’Leary, was standing by her.

Yet just weeks before, with her party’s support, Truss believed she was about to lead the country into what she promised would be a future of dynamic economic growth.

Driven by a messianic vision of Britain as a paradise for buccaneering entrepreneurs, she was unexpectedly propelled into Downing Street after the Conservative MPs turned on their erstwhile hero Boris Johnson over the summer amid a succession of now-distant scandals.

Truss’s loyalty to Boris contrasted with her main rival for the leadership, former Chancellor Rishi Sunak, who was seen by party members as being the chief assassin.

As an experienced member of the Cabinet, despite being just 47, Truss appeared to be a safe pair of hands – and a bold alternative to the failed policies of the past. She promised low taxes, ‘supply side’ reforms and a return to the halcyon days of Margaret Thatcher and Ronald Reagan. 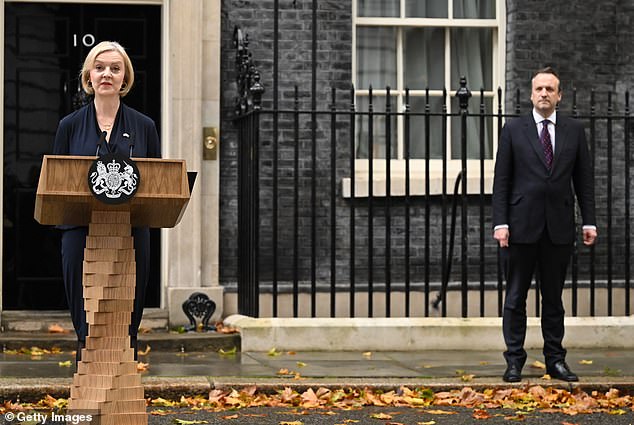 No prime minister has experienced such a rapid rise and suffered so spectacular a fall as Liz Truss: The shortest and most dramatic tenure of office in history.

Yet her own downfall proved even more humiliating than her predecessor’s. Though she inherited runaway inflation, the highest taxes in 70 years and an energy crisis caused by war in Europe, she contrived to make her predicament much worse by a combination of naïveté and dogma.

Truss had always offered dedication, energy and a Stakhanovite work ethic. But her attachment to American-style libertarianism led to a form of tunnel vision that proved her undoing.

Her political ambition has always been more important to her than anything else. This single-minded focus on climbing the greasy pole to Downing Street marked her out from her rivals – first at Oxford, where she was a Liberal Democrat and a republican, then in the world of free-market think tanks.

Her ministerial career was impressive but not outstanding: at Environment, Justice and the Treasury, she rose without trace. Then, after switching sides on Brexit, she became a notably energetic trade secretary.

This led to her promotion by Boris to foreign secretary a year ago, after western forces’ disastrous scuttle from Afghanistan.

When Boris made a series of unforced errors and was engulfed by the Partygate scandal, she stuck by him – then inherited his mantle.

A somehow awkward public figure, Truss was nevertheless proud of being the first comprehensive school-educated pupil to break down the barriers to Downing Street, even if her upbringing in Paisley and Leeds was not impoverished, and there were plenty of books in the house. Her parents are Left-leaning – and her life can be seen as one long rebellion against everything her family stood for.

Truss lacked many of Boris’s political gifts – not least a cultural hinterland and sense of humour, and was also a far less fluent speaker and a more impatient listener than her predecessor. She gambled her career on ‘growth’ at all costs – but when her judgment proved to be flawed, she had nothing else to fall back on. 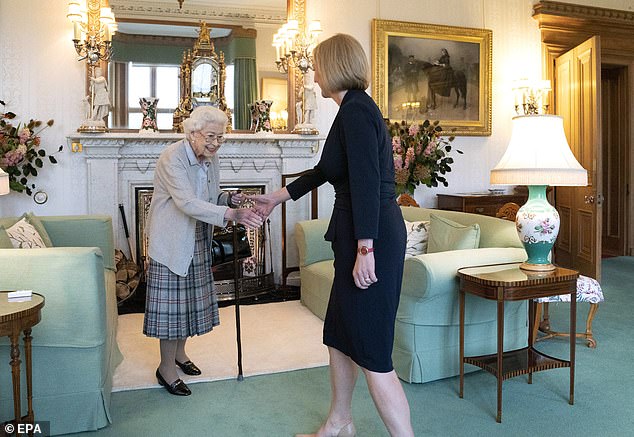 Her premiership began inauspiciously: the death of the Queen on September 8, less than two days after she had kissed hands at Balmoral, plunged the nation into grief.

Her premiership began inauspiciously: the death of the Queen on September 8, less than two days after she had kissed hands at Balmoral, plunged the nation into grief.

It was hardly the fault of the new prime minister that her first fortnight in office was so overshadowed. But it was her decision to launch a radical new ‘growth plan’ in the same week as the Queen’s funeral.

That precipitate haste proved fatal. Neither the country nor the markets were ready to accept the ‘fiscal event’ that her chancellor and closest ally Kwasi Kwarteng sprang upon the world. The mini-Budget included a huge £150billion package to cap energy prices, while reversing Sunak’s national insurance hike and a planned rise in corporation tax.

Most controversially, Kwarteng brought forward a cut in the basic rate of income tax and scrapped the top 45p rate, while simultaneously abolishing the limit on bankers’ bonuses. If the economic justification for these measures was defensible, the ‘optics’ were terrible. As the tribune of ‘workers’ Conservatism’, Robert Halfon MP, later told the PM, she and Kwarteng had ‘trashed the last ten years of Tory government’.

The markets swiftly delivered their verdict on ‘Trussonomics’. Within hours there was a run on the pound, which fell almost to parity with the dollar.

Then government bonds, or gilts, began to be sold in terrifying quantities, raising the price of borrowing and placing some financial institutions in peril. Within days, the Bank of England was forced to intervene to save pension funds from a ‘doom spiral’ of selling gilts and risking their own solvency.

Meanwhile the panic on the markets was mirrored by growing disquiet among Conservative MPs. 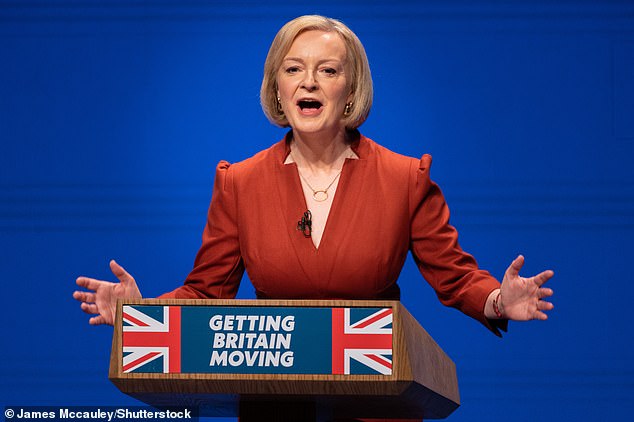 The Labour lead had by now soared to a stratospheric 33 points, as furious Conservative voters abandoned the Government. Not only had the cost of their mortgages doubled, but pension funds were wobbling.

The two key constituencies of any Tory majority have always been property owners and pensioners. In short order, Truss and Kwarteng had alienated both.

Other groups who had backed Boris were also rendered politically homeless. Truss had signalled a focus on food security at the expense of conservation and wildlife, which led several big charities to claim that she had declared ‘war on nature’.

Similarly, former Labour voters in the Red Wall were dismayed as ‘levelling up’ ceased to be a priority and plans to boost immigration were floated. The electoral coalition assembled by Boris in the 2019 landslide had dissolved with a speed that astonished pollsters.

What Truss had hoped would be a triumphant party conference in Birmingham earlier this month turned out to be another circle of hell for the PM. A chorus of criticism of the 45p tax cut was led by veteran minister Michael Gove.

What proved to be the first of several U-turns then became unavoidable. In her speech to the conference, Truss reversed the tax cut for the highest earners and promised: ‘I get it and I have listened.’

But that promise of ‘compassionate Conservatism’ was belied by the rest of the speech. She had three priorities, she declared: ‘Growth, growth and growth.’ It was a workmanlike performance, but not enough to reassure the voters or her own party.

As MPs returned to Westminster, the atmosphere was sepulchral. The markets had not been satisfied by the U-turn on income tax and the Bank of England was still desperately firefighting to avoid a fresh collapse.

Last Wednesday, October 12, Truss faced Prime Minister’s Questions: she sounded shellshocked by her ordeal and even a lacklustre performance by Sir Keir Starmer was not enough to silence her own side. Afterwards came a reckoning at the 1922 Committee. The MPs’ verdict was damning.

Meanwhile events were gathering pace. In Washington the International Monetary Fund was meeting, attended by Kwarteng. Abruptly he was summoned home, to be given his marching orders on the morning of October 14. His was only the second shortest Chancellorship in history, after Iain Macleod, who had died in office in 1970. 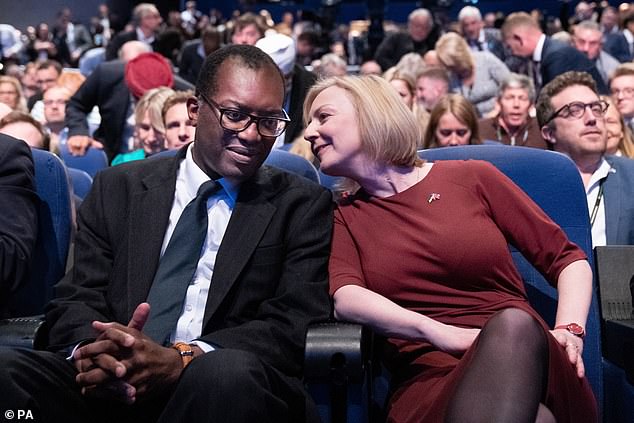 In Washington the International Monetary Fund was meeting, attended by Kwarteng. Abruptly he was summoned home, to be given his marching orders on the morning of October 14

After this final throw of the dice, Truss held a press conference in Downing Street. She read out a short statement and took only four questions.

Her defiant talk of growth seemed irrelevant as she struggled to rescue her premiership by unpicking the rest of the mini-Budget via her new Chancellor Jeremy Hunt.

When she insisted that the national interest was the only thing that mattered to her, however, some felt that she protested too much. It was now a question not of the common good – but of her own survival.

Kwarteng’s sacrifice bought her only a brief respite. Once MPs scent blood, the Commons is a brutal arena. The wounded PM lacked the charisma and resilience to reassert herself in the chamber.

Truss had always hoped her destiny was to be an even more radical leader than Mrs Thatcher. The pity was that her moment came at the worst possible time, when pandemic and war had spawned inflation and bloated the size of the state.

Her rise to power was a triumph of hope over experience. In modern times the British have never warmed to the vision of a ‘night-watchman state’ – in which the role of government is reduced to its bare minimum – that was championed by this determined yet dogmatic woman.

The economy proved to be much more brittle and fragile than either she or Kwarteng were aware.

When they sacked Sir Tom Scholar, the mandarin who represented ‘Treasury orthodoxy’, they unknowingly damaged the confidence of the City and the wider financial world. It turned out that fiscal rectitude still counted for something.

Liz Truss’s political epitaph could be: ‘Let the economy enjoy growth, though the heavens fall.’ Tragically for her, the heavens did fall on this most unfortunate and inept of Prime Ministers. And they have buried the free market cause to which she dedicated her political life, perhaps for a generation.

Daniel Johnson is the editor of the TheArticle.com.