Do you need a voice lift? It’s not just night sweats and hot flushes. Now experts say menopause affects the way we speak, too

Not only must women expect to lose their sex drive, sleep poorly, feel anxious and forget things, it now seems our voices conk out during the menopause, too.

People may have been up in arms about Julia Sawalha, 52, no longer voicing Ginger in Chicken Run 2 because her voice was deemed too old, but, according the British Voice Association, the menopause can have a significant effect on our vocals.

At 55 and still working in TV and radio, this matters to me. Which is how I find myself on a course by voice coach Anne-Marie Speed. I tell her I’m not quite at the big M yet and haven’t noticed much of a change. But Anne-Marie, 56, a brisk New Zealander whose day job is teaching actors how to speak clearly and properly, takes no notice. 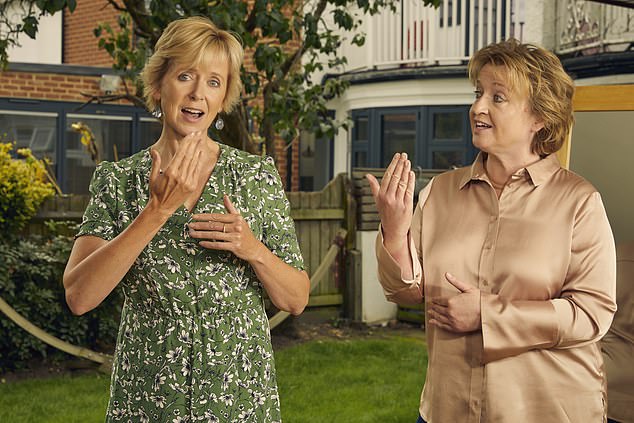 ‘Have a glass of water. How much water do you drink? Dehydration affects ageing voices.’ I probably don’t drink enough so, at perimenopause, has dehydration hit? I start worrying about sounding like a croaking hag.

When we get older, the larynx, which contains the vocal cords, or folds, drops slightly, making everyone’s voice deeper. Plus, levels of oestrogen decline in women, causing the folds to dry out.

As she was going through the menopause, Anne-Marie decided to help her clients address this change, with exercises and lifestyle tweaks.

She devised a monthly course, lasting a day, at her London-based firm The Voice Explained (thevoiceexplained.com), which specifically addresses ageing voices in men and women. 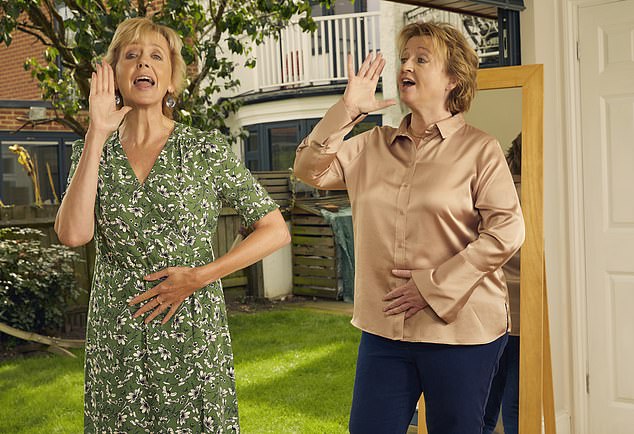 She deplores the fact that, although every woman will experience it in their life, menopause is still rather unknown — particularly its effect on the voice.

‘It’s a disgrace that it is not talked about enough, and women don’t know how or where to get support,’ she says. I signed up to see what I could learn.

How to regain your youthful voice:

2. Reconnect with your spoken voice. Read a poem out loud every day. Walk around the house singing. Anything to exercise that muscle.

3. Do some tongue rolls and other exercises. Rolling your Rs, doing ‘M’ sounds with your lips shut, imitating a fire siren — it all helps.

4. Remember posture and breathing. Relaxing your diaphragm helps your lungs.

5. Use your ‘reading aloud’ voice as your everyday voice.

Having been a broadcaster for years, including arts correspondent for the BBC, and now doing a fair bit of public speaking in my role as chair of BBC Children In Need, my voice is a rather crucial asset. I confess to Anne-Marie that it does get a bit tired these days.

‘Oestrogen, which falls during the menopause, keeps everything hydrated,’ she says. ‘So, as we age, everything gets very dry, including the vocal folds. In your late 40s or early 50s, you might notice your voice gets more fragile; there is a loss of range and stamina. Shall we open the folds?’

She soon has me drinking water, and then going, ‘Uh, uh, uh’. ‘That noise is from your vocal folds,’ she tells me. ‘The folds are in the larynx at the top of the airway, and their job is to regulate air. When we normally speak, the cords make contact about 200 times a second. So the larynx is a valve,’ she says.

She’s pointing at a rather dreadful model of a plastic throat, complete with tongue and teeth, which she has on her desk.

‘Efficient voice use is dependent on how well the vocal cords can close. As you age, you have less power, particularly if you don’t exercise your voice a lot. It is a muscle and it needs a workout.’

The next exercise, she tells me, is called the Siren. ‘Let’s make a voice like a fire engine. This introduces movement into the voice. Keep your lips closed.’

‘Now go ‘Mmmm’, as if you are looking at a lovely cake.’ I obey, making the sound enthusiastically, and feeling the vibration on my larynx. ‘Roll your Rs. Blow raspberries through your lips.’

I will say, my voice sounds a lot clearer afterwards. I think much of what Anne-Marie has to say to her clients is about confidence. The sort of confidence you might have had when you were in your 20s, and thought you had all the answers.

Plenty of us get a bit more unsure about life as we get older, and that can result in a weaker voice. Anne Marie wants us to re-engage with our youthful certainty, so we use our voice properly: ‘You are committed to what you are saying, which some people find challenging, particularly girls and women. 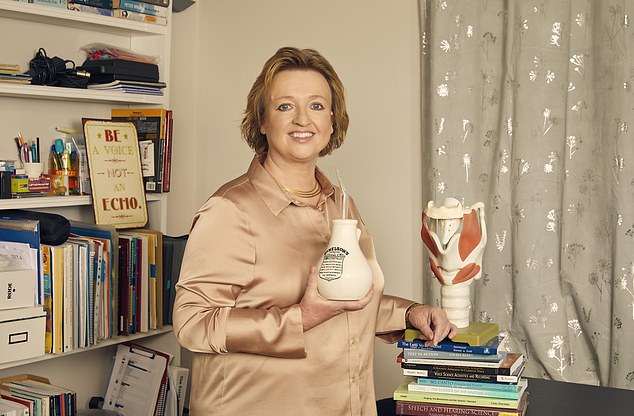 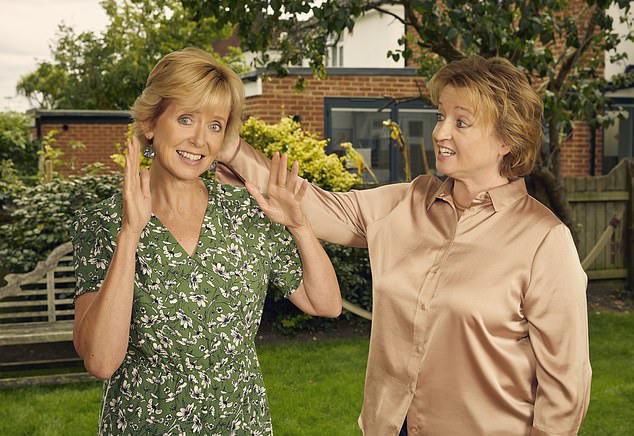 ‘Even actors, who nowadays don’t have formal training, are not in touch with their voice. There is so much to be gained when you speak in public. How often do you read poetry aloud?’

Well, I used to read to my four children every night but, as they grew up, that routine fell away.

‘Right,’ says Anne-Marie. She reaches up on to her bookshelf, on which stands a sign saying, ‘Be a voice not an echo’, and gets me a book called Poems That Make Grown Women Cry. We read the Charles Causley classic Timothy Winters. It doesn’t make me cry. But, apparently, I’m still not engaging my vocal cords enough.

‘Try it with your tongue sticking out,’ says Anne-Marie. This forces you to spit the words out as you try to make a sound. It looks, and sounds, hilarious. Luckily, the photographer has yet to arrive.

What might her clients do during the full-day course? ‘Hydrate the voice. Remember when you drink a glass of water it will take upward of four hours to hydrate your body properly,’ she says. ‘Then we do these exercises, to create a sense of awareness of what a connected voice feels like.’

Next, we do some counting — as if every number was coming in on a plate of something delicious. ‘One mmmm, two mmmm, three mmmm,’ and so on.

It is as if my voice has suddenly been digitally enhanced. Why? ‘Well, because you are making tiny adjustments to the sound you are creating, and finding the resonant frequency of your own voice.’ It honestly felt as if my voice had been warmed up and oiled.

We talk about famous people with great voice control. ‘Maggie Smith, of course. Judi Dench. Actors who have learned how to use their voices unamplified. Also Mrs Thatcher was very dedicated in her practice, and she understood that her voice was part of the presentation package. 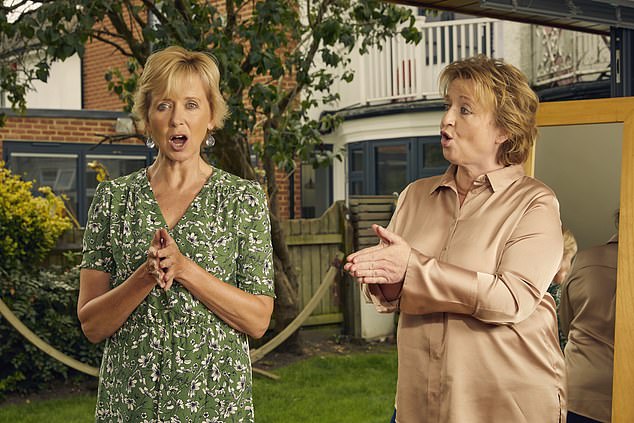 Rosie said Anne Marie’s voice was ‘like a crystal bell, clear and immaculate’

‘People associate voice training with elocution — it’s not that at all. When voice work is done well, we just get more of you. I want to encourage people to use their voice well, in their own accent.’

So, short of signing up for a class, how can we all avoid starting to sound like frogs?

Think about powering your voice, and not relaxing into lazy speech, says Anne-Marie. ‘Sit up straight.’ I immediately stop slouching. ‘When you were reading that poem you automatically sat up. That’s how you should always be.’

We also need to pay attention to the tongue. ‘It shapes our words and connects right back with the larynx. The back of the tongue can get very tight’, she says.

She shows me how to exercise it with a tongue roll. ‘Start with your tongue at the side of your cheek and roll it around your mouth. One, and two … keep breathing. Tell me when it starts aching.’

Anne-Marie takes no notice. ‘Then two times round the mouth. Then one,’ she says. Help! ‘Now go, ‘Mmm’.’

I can hardly feel my tongue when we finish, but the clarity in my voice is astonishing. ‘It’s a great exercise to do before any public speaking,’ she says.

And we all need to get off our screens, she adds, so we are not just texting or emailing all day. ‘With ageing voices you have to use it or lose it. And with social isolation, particularly recently, people find if they are not speaking to anyone, they lose their voice.’

When I get home, I replay my recording of the interview. I am mumbling. Anne-Marie’s voice, however, is like a crystal bell, clear and immaculate. I might try a few more of those tongue rolls.