Doctors have called for a halt to draft federal laws to enshrine religious freedom out of concern the changes would curb access to health services for women and compound discrimination against gay and lesbian Australians.

In a new flashpoint over the plan, general practitioners are warning against the Religious Discrimination Bill despite the federal government’s decision to make drastic cuts to the draft bill in the hope of securing a vote in Parliament next week. 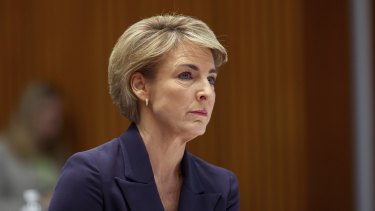 Liberal and Nationals MPs have asked Attorney-General Michaelia Cash to let them see the Religious Discrimination Bill in full.Credit:Dominic Lorrimer

“Furthermore, we remain concerned of the potential impact of the bill on the delivery and access to some women’s health services, and vulnerable groups’ access to suitable healthcare or particular health services.

“The proposed law could compound negative community attitudes toward those most vulnerable including minority groups and the LGBTQI+ community, as well as those in rural areas with fewer health services available.

“Given Australia is already in the grips of a mental health crisis, we must do everything in our power to prevent this.”

The warning comes as the government confirms it will take at least another year to pass separate changes to prevent religious schools suspending or expelling students because of their sexuality or gender identity, a commitment Prime Minister Scott Morrison made in October 2018.

Attorney-General Michaelia Cash wrote to the Australian Law Reform Commission president Sarah Derrington on Wednesday to confirm the government policy on school students and to promise to pass a law once the commission delivered a report on the issue.

Senator Cash said the ALRC report was expected one year after the passage of the religious discrimination law.

“I look forward to receiving, in due course, the ALRC’s report on this important reference,” she wrote.

With the Senate unlikely to pass the religious bill this year, the timing suggests the report from the ALRC would take until early 2023 and the federal law would take some time after that, meaning the changes would come at least four years after Mr Morrison made the commitment.

Liberal and Nationals MPs have asked Attorney-General Michaelia Cash to let them see the Religious Discrimination Bill in full before the Coalition party room is asked to approve the plan on Tuesday, amid rumours Mr Morrison wants to introduce the draft law into Parliament himself.

Government MPs are split over the revised bill after Senator Cash told them on Monday that she had removed a divisive “Folau clause” on free speech, dropped conscientious objections for medical professionals, kept protections for statements of belief and retained the right for religious schools to make personal faith a factor in hiring decisions.

The changes weaken but do not strike out a series of measures that were meant to protect people such as footballer Israel Folau after Rugby Australia terminated his contract in 2019 over a social media post claiming homosexuals, adulterers, atheists and other “sinners” would go to hell.

While an earlier draft of the bill sought to stop employers sacking people such as Mr Folau in similar circumstances, the revised plan drops this employer rule because some Liberals were adamantly opposed to the provision.

However, some MPs remained concerned about a provision that would prevent a qualifying body taking action against a member over unreasonable or offensive comments, a situation that could arise with associations that set professional standards in fields like medicine or the law.

Peak health groups including the Australian Medical Association, the Royal Australasian College of Physicians, the Royal Australian and New Zealand College of Obstetricians and Gynaecologists and the RACGP objected to the earlier draft because of the “conscientious objection” rule that allowed medical practitioners to refuse to offer health services on the grounds of their personal faith.

Even with that rule removed, however, the health groups maintained their concerns and called for the release of the draft bill in full so they and others could consider whether the law would prevent patients being able to access abortion, contraception and broader healthcare.

“Until we have the opportunity to review the bill in its entirety, the AMA leadership today continues to hold the same concerns in relation to the religious freedom bill,” said AMA president Omar Khorshid.

RACP president John Wilson said a doctor’s first responsibility was the care of the patient.

“In our view, there is a risk of creating a tension between a doctor’s responsibility to their patient, and their own religious beliefs that puts at risk patients’ health outcomes,” he said.