The outgoing US President gave Mr Morrison the Legion of Merit, along with former and current leaders of other US allies including ex-Japanese prime minister Shinzo Abe and Indian Prime Minister Narendra Modi. 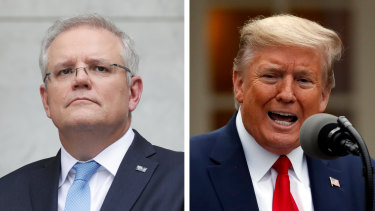 The Australian Prime Minister was given the award "for his leadership in addressing global challenges and promoting collective security".

The award was presented by the US national security adviser, Robert O'Brien, on Monday evening Washington time, and was accepted by Australia's ambassador to the US Arthur Sinodinos on behalf of Mr Morrison.

Mr Sinodinos said he was honoured to accept the US Legion of Merit, which recognised the Prime Minister's leadership that "strengthened the partnership between the United States and Australia in addressing global challenges and promoting collective security".

The Legion of Merit is one of the the US's highest military decorations which is given to American troops as well as political figures of foreign governments.

Mr Morrison enjoyed one of the closest relationships with Mr Trump of any world leader.

The Australian Prime Minister was last year treated to a state dinner at the White House. Mr Morrison was just the second world leader to be given a state dinner by Mr Trump after French President Emmanuel Macron.

During a dinner in Japan, Mr Trump praised Mr Morrison and boasted he had predicted his victory at the ballot box as it mirrored his own win in 2016.

"He didn't surprise me but he surprised a lot of other people. See, I knew him. So I said he's going to do very well and he did," Mr Trump said last year.