There were reasons aplenty why this frail old black man and I were sitting yet again on the verandah of the Wellington pub in South Australia, eating fish and chips and drinking water.

One of the reasons was for the view. Not, as you’d expect, for the view of the River Murray, or Murrundi, which was an excellent view nevertheless … a vast rural expanse, distant hills, and the thick snake of the mighty river dominating below. The view of actual interest, on this and every previous occasion the two of us had been here, was of the old-fashioned vehicular ferry that crossed the Murrundi at Wellington, quietly pulling itself to the opposing bank by cables that stretched across the width of the river. 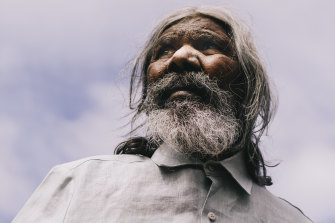 David Gulpilil has long dreamed of buying a ferry for his homeland.Credit:Miles and Bing Rowland

Bicycles, cars, caravans, trucks and even semi-trailers were carried in batches, first in one direction, then a fresh batch in the other. Each time the ferry started moving, the old black man would lean slightly forward, thinking, calculating, seeing into the future. The old man wanted one of those ferries, for his homeland, for his people, so they could cross that river up there in Arnhem Land, just drive across whenever they wanted to, just like white people do.

We’d been to this place overlooking the ferry a number of times, and other places, and the ritual had only minor variation. I’d pick the old bloke up late morning, from where he lived in Murray Bridge. Mary, his carer, would hand me his little medicine cooler filled with puffers and pills, plus his tissue box and jacket. He’d come stumbling out of the house with his walking stick, looking at any moment to be falling over but always making it to the car intact. Sometimes, when he was particularly crook or unsteady on his feet, I’d have to help him cross the four- or five-metre space between open front door of the house and open front door of the car. Mostly I had to help him put on his seatbelt.

As soon as I sat down in the driver’s seat the old man would want the car to be taking off, to the point of panic if I took too long to put it into gear and get moving. It was in movement that he found relief, the movement of a car being driven. Then he could sleep, and go back to sleep if he woke for any reason, sleeping and dreaming in a world entirely his own, sometimes dribbling ceaselessly down his thick beard, sometimes mumbling in his language about things only he understood.

Before sleep I’d have to ask where he wanted to go for lunch, which establishment, how far away. The distance was important. If he was relaxed and wanted a long sleep, he might suggest somewhere far away, an hour away, an hour-and-a-half. If he was edgy, or fearful, he’d want somewhere close so that I could get him home rapidly, or, in his mind, to the hospital even.

People would want to talk. Mostly he engaged with them, as best he could … it was all he had left of the fame and fortune of his better times.

Over the months, and eventually years, we’d found more than a dozen suitable places. They almost always looked out over water … the river, or the lake into which the river flowed, or the ocean past the lake’s outlet. They had to have either fish and chips or barramundi on the menu, preferably both so he could choose, although in the second year, Coorong mullet had also become a favourite.

North, to Mannum 20 minutes away, was the fallback if he was feeling bad, if he didn’t dare to go too far from home, from Mary. Two places in Mannum, the Mannum Club and the Mannum Pub, three if you counted takeaway fish and chips on a riverside park bench; south we’d go to Meningie, a little lakefront place where the food and decor were most doubtful but the outlook over Yarli, Lake Albert, was, when the pelicans were out to play, mesmerising; and south-east, well, there were places all over if you went south-east, from Milang to Strathalbyn, from Goolwa to Port Elliot to Victor Harbour.

Each journey was much the same, just of different duration. Usually within minutes he was asleep and I would drive, silently, for the half-hour or the hour-and-a-half. I would stop the car on arrival and he would wake, slowly, gently, knowing we were there. We’d shuffle into the cafe or pub or restaurant, I’d sit him down somewhere he could see the water. Sometimes he was recognised, and people would want to talk. Mostly he engaged with them, as best he could … it was all he had left of the fame and fortune of his better times. 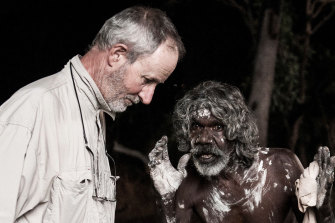 Rolf de Heer and David Gulpilil on the set of Charlie’s Country in 2013.

When he’d eaten enough and looked out over the water enough, he’d nod, time to go. He’d sleep again on the way home, then at the door I’d let him know when I’d be back … Thursday, or next week, or in two weeks’ time. Often, on an outing that might take three or four hours, less than a dozen words would be exchanged between us. We were both very comfortable with the long silences; we trusted them.

But this time we were at the place overlooking the ferry, the ferry we would catch on the way home, so that he could see it and feel it in close-up again.

We’d talked about the ferry numbers of times. The ferry was the impossible. He wanted to buy one, sail it halfway round Australia and install it in the swamp, to be able to get to Gulparil, his country, to be able to drive there from the nearby community of Ramingining. He was serious about it, it was an earnest desire, a need, and when that need was in his head, we’d talk more in one outing than in a year of non-ferry outings combined. 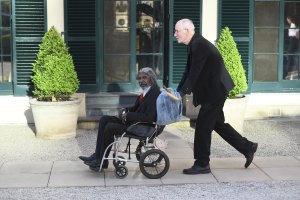 Rolf de Heer and David Gulpilil attend the premiere of My Name Is Gulpilil at this year’s Adelaide Film Festival.Credit:Naomi Jellicoe

But as the old man became sicker, and as his return to his homeland became more unlikely, I stopped discouraging his talk of the impossible. I researched the subject of ferries. I showed him, on my laptop, ferries of different sizes and shapes for sale. We talked about how to solve all the different problems the scheme had, though neither of us much mentioned the cost any more.

Now he nodded towards the ferry. I could tell that it was the bus on it that impressed him. But it was time to go. Shuffling slowly towards the car, we had to stop as he started wheezing. “Puffer! Puffer!” I dived into the little cooler and quickly assembled his inhaler. He breathed deeply from it, stood a moment, then nodded for us to continue.

In the car, he was asleep within moments. He slept his way across the river, deep in his own world, probably crossing that river to Gulparil.

Rolf de Heer is a producer on My Name Is Gulpilil, which opens on May 27.

Find out the next TV shows, streaming series and movies to add to your must-sees. Sign up to get it every Thursday.