Expert claims Prince Harry is seeking compassion from his father 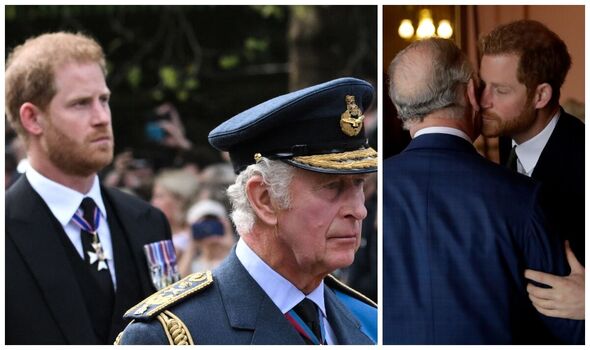 Prince Harry’s autobiography, Spare, details the breakdown in relationships between the Duke of Sussex and his family, and the communication between both parties becoming rapidly worse. Therefore, relationship expert Valon Asani shared the top tips for mending broken-down family relationships with Express.co.uk.

Mr Asani said: “When being faced with a broken family, often we say, ‘I don’t know where to start’ but what we actually mean is: ‘I’m scared to start’. After a family fallout, one of the hardest aspects to deal with is to accept the idea that the other party feels wronged in some way by your actions, even if they were not intended to cause hurt. However, acknowledging how the other party feels, whether you agree or not, can show empathy and understanding that can then lead to more effective communication to be built.

“Prince Harry has been incredibly open about the many struggles he has faced in his past, many of these issues being active problems, such as the lack of contact and accountability that he feels the Royal Family are responsible for.

“The struggles that Harry details in his autobiography appear to stem from a lot of childhood trauma and repressed emotions from the environment he grew up in, which many can empathise with and relate to.

“An acknowledgement from the family, whether private or public, of the difficulties that the Duke feels he is facing could have a huge impact that could lead to a reconciliation. However, the same sentiment applies the other way around; Prince Harry should also acknowledge that the Palace may view events differently – as the late Queen famously said ‘recollections may vary’ – and their views are also valid.”

Mr Asani continued: “The first step to reconnecting in a family can often be to find something that either party can bond over, no matter how big or small.

“This common ground can present itself in many ways, such as an event you may both attend or just a shared interest. Using something that both of you have in common can be used as a catalyst for building up communication again.

“In Prince Harry’s case, causes that are close to his heart and the rest of the Royal Family’s, such as the Invictus Games, are a chance to rekindle a relationship and begin communicating again.”

Take the first step and extend an olive branch

The expert suggested: “This can be a difficult step to take, however, if there has been a severe breakdown in communication within a family, it might be necessary. Reaching out to the other party and offering some sort of gesture, whether this is an invite for coffee or a kind letter, can establish a platform for which the relationship can start to be rebuilt.

“It can also reveal where both parties are in terms of emotions and if they want to pursue a future relationship. It has been reported that Prince Harry and Meghan Markle have been invited to King Charles III’s coronation in May, which is an olive branch from the family to the couple.

“The trauma that Prince Harry has recounted and shared with the world recently can manifest itself in many ways, and Prince Harry likely has feelings of abandonment from his family and is seeking some form of compassion and communication from them.

“The occasion of the coronation is cause for celebration as we celebrate the beginning of the King’s reign, and such a meaningful and happy occasion may be the perfect backdrop for reconciliation.”

Mr Asani noted: “If the communication is starting up again, it is important to ensure that boundaries are set to avoid another rift occurring.

“Prince Harry and the Royal Family alike appear to have similar strict boundaries when it comes to the idea of privacy, however, both parties action this idea in very different ways.

“Therefore, when communication starts again, they should both immediately share the boundaries that they are and aren’t comfortable with.”

The relationship expert commented: “It may be exciting or feel like a relief to have your relationship with your family begin to repair but remember to take it slow.

“The other party may be more hesitant than you are to jump straight back into the way the relationship used to be and acknowledging and respecting that is crucial to solving any and all problems.

“If the couple can recognise this hesitancy, they can more effectively communicate and build the relationship back up at a pace that suits everyone.”