Firefighters answering our most burning questions is must-see TV

The men and women on the frontline of our emergency services take centre stage this week, as our critics dissect this week's TV. 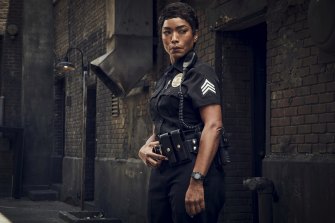 It’s a flashback episode, which possibly means the writers’ room was running out of steam but also provides a chance for a ’90s-heavy soundtrack featuring Young MC’s Busta Move, Soul II Soul’s Back to Life and N.W.A.’s Express Yourself – so let’s call it a win. The focus is on Athena (Angela Bassett) whose past becomes present when a murder weapon used to kill her police officer fiancee resurfaces after two decades. -LD 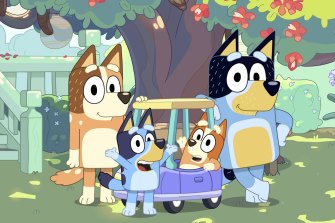 It’s a Logie winner, an Emmy nominee and the comeback vehicle for Custard’s Dave McCormack, and you can add to its list of achievements about 200 million iviews and ensnaring the hearts and minds of countless Australian youngsters. Bluey is a bona fide cultural juggernaut wrapping life lessons in a cute animated seven-minute package. Newcomers might be tripped up by the realisation that – hooray! – Bluey is female (it can be hard to tell under all that fur; plus, I suspect the name is a commutation test designed to expose the social assumptions embedded in language). But there’s another box-fresh 52 episodes to get down with the world of Bluey, her sister Bingo and their parents as they navigate an eerily middle-class modern world. -LD 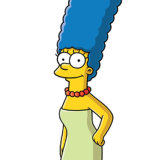 Any Simpsons episode starring Marge is something to look forward to; doubly so when it wraps its Marge-love in a piss-take of the cult TV show Portlandia. The tenuous excuse (is there any other kind in the Simpsons’ world?) finds Marge taking up competitive lumberjacking after realising her family and greater Springfield see her as boring. Heading off to a month-long retreat in Portland with her training buddy Paula opens the gateway for a barrage of jokes about America’s hippest city (as irascible comic book guy says, ‘‘Here, I’m quirky rather than objectionable’’) and setting up a forlorn Homer for some cringe-worthy assumptions about lesbians’ need for donor sperm. Another reason for fans to take note: the episode introduces actress Grey Griffin as the voice of annoying twins Sherri and Terri, and Martin Price following the death of Russi Taylor. -LD 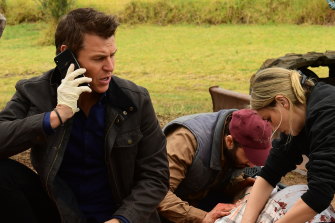 It’s a country medical drama but no A Country Practice thanks to the casual profanity and non-judgmental depiction of medicos’ casual drug use (actually, for anyone who has long suspected Frank Gilroy and Shirley hit the ganja of an evening maybe it really is like ACP). Likeably louche, Doctor Doctor is notable for its insouciant approach to modern life whether that’s a gram of coke destined to get new medical intern Tara (Kate Jenkinson) in trouble over random workplace drug-testing or the practical realities of online dating. While the fictional town of Whyhope (geddit?) is written as a medicos’ Van Diemen’s Land where wrongdoers are sent for probation, it’s not by any means a backwater. Census data was unavailable, but the town’s population is big enough to support a thriving pole-dancing exercise studio, as discovered by church-going straighty-one-eighty Hayley (Chloe Bayliss), and the entrepreneurial mayor is planning to open a topless bar. Clutch the pearls. Rodger Corser’s Dr Hugh, meanwhile, is falling for bad girl Tara, resulting in a major URST alert as the season edges closer to its penultimate episode. -LD 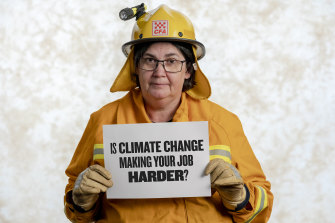 Firefighter Michele Kampen on ABC’s You Can’t Ask That.

Not sure if firefighters really fit the bill as ‘‘misunderstood, marginalised Australians’’ but this reliably excellent show has our blessing to broaden its ambit considering it was evidently filmed in the aftermath of the horror summer just gone. A band of predictably salt-of-the-earth firefighters answer everything from the experience of being face to face with a wall of flames (terrifying, says one and all) to why they couldn’t answer every call for help (resources; please direct that one to the PM’s office). ScoMo’s ‘‘leadership’’ through the bushfire crisis makes a cameo as another thread to be pulled from the fraying carpet of national confidence as we face more hellish fire seasons. -LD 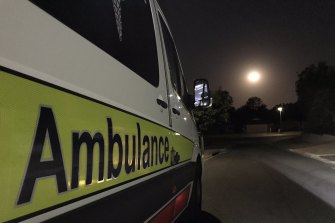 On the road with the Queensland Ambulance Service

A young man with a javelin piercing his groin — repeat, javelin piercing his groin – is the patient highlight of this week’s mixed half-dozen that includes a middle-aged heart attack, a young drink driver who’s totalled his car and a serious case of intoxication. Yet as nerve-wracking and gruesome as the individual cases may be, it’s the capable folk at the Queensland Ambulance Service who provide the emotional crux. A paean to the Steve and Shelleys of the world who pull 12-hour shifts mopping up after the rest of us, it’s smartly put together telly with outtakes from the dispatch centre forming a dramatic arc with the paramedics on the road, and then cruelly forcing anyone with a pulse to wait until the end credits to discover what happened to the patients post-ambulance. -LD 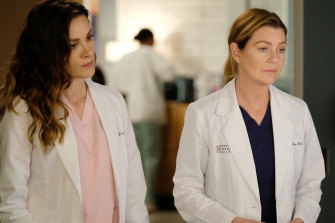 The Grey’s season return finds Meredith facing the prospect of jail time, which is something that never would have happened in the McDreamy days. Plenty has happened in the past 15 years, but central cast members take pride of narrative place at the season 16 kick-off: Ellen Pompeo finds herself multitasking in a courtroom drama in the wash-up from the insurance fraud scandal, while curmudgeonly Richard Webber is reduced to working for a health app doing home visits. The Grey Sloan Memorial Hospital is not an employer of choice for anyone who wants to remain married but there’s a Kleenex-worthy love story involving a married pair of patients. Viewers who live on Planet Reality might prefer the excellent monologue Thomas Korakick (Greg Germann) gives Teddy (Kim Raver) about his ongoing affections despite the arrival of her new baby. -LD 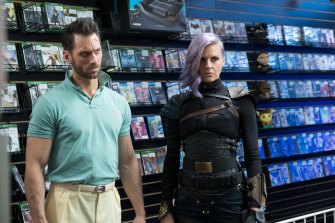 This slacker dude action comedy from the fevered minds of Superbad creators Seth Rogen and Evan Goldberg sticks faithfully to their groove of sex-obsessed losers and lengthy joke set-ups about bodily fluids. Medical research facility janitor Josh Futturman (Josh Hutcherson) spends his spare time playing superannuated video game Biotic Wars and receives an unexpected bonus round when he finally defeats the forces of evil: the game’s two heroes materialise in his bedroom to enlist him in saving the world. If that sounds like so much canned cheese – well, it is. But Future Man is worth praising with faint damn. A nostalgic homage to Back to the Future, The Terminator and the entire 1980s teen movie oeuvre, it’s a giant pratfall for a well-cast Hutcherson as a dweeb accidentally anointed as the saviour of humankind. -LD 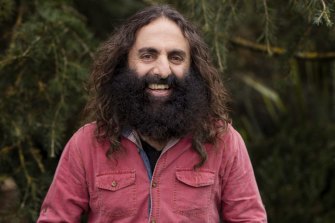 Starting in a garden geared for food in the Sydney suburb of Middle Cove with a sighting of a towering Monstera, which he also excitedly refers to as ‘‘the fruit salad plant’’, Gardening Australia host Costa Georgiadis is in passionate form in this episode. Forever looking like he’s just set up the stage for a show on Joe Cocker’s 1970 American tour, the green fingers guru explores a ‘‘productive paradise’’ that refuses to be cowed by a steep block, and much of this episode is dedicated to practical achievement instead of floricultural perfection. Elsewhere his correspondents get to grips with the creation of eucalyptus oil, add a DIY sink unit to a compost bin, and visit a ‘‘plantaholic’’ whose home in the Melbourne suburb of Richmond is filled with potted greenery. The latter is a nice reminder that this ABC institution has a thankfully broad remit. -CM 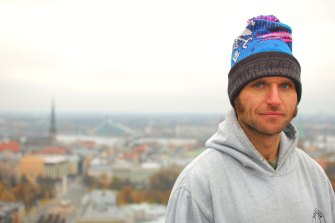 Our Guy In … Latvia with Guy Martin.

Guy Martin, the very English motorbike racer turned unlikely but successful television presenter, generally prefers objects – especially ones with engines and wheels – to humans, but in this hour-long documentary he makes an exception for his maternal grandfather. To mark the 10th anniversary of the passing of Lincolnshire resident Walter Kidals, Martin (pictured) visits Latvia, where Waldemars Kidals was born, raised, and reportedly fought with Nazi Germany against the Soviet Union during World War II. It’s a mix of archival research, visits to farmhouse ruins, and some uncomfortable 20th century geopolitical history. Martin’s cheery commentary is tempered by the circumstances, and what emerges is the gap between his grandfather’s survival of a brutal war he never spoke of and the tinkerer whose company Martin adored as a child. Many of us, this show reminds us, contain contradictions. -CM 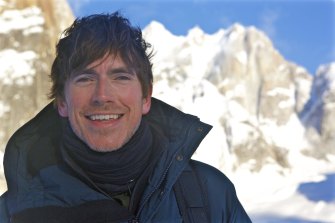 Simon Reeve doesn’t do dainty travel documentaries. The journalist and author measures his destinations through historic fault lines and contemporary flashpoints, so this episode of his criss-cross journey through North America finds Reeve atop melting glaciers, measuring the clash between environmental and economic concerns over a major pipeline, and examining the spread of America’s opioid crisis to the Canadian city of Toronto. He’s neither a sensationalist nor a cynic, and as with most of Reeve’s presenting work there’s an openness to chance moments and a knowledge of enduring circumstances that makes his narratives sharper and more timely than his pleasant contemporaries. -CM