‘Flirting with their form’: Dees pick and choose when to go hard, says Stokes

Dual premiership player Mathew Stokes says a change in attitude is behind Melbourne’s form slump and they are picking and choosing moments to go hard in games.

The Demons sit second on the ladder but have won just three of their last eight matches and in a tightly contested season, just four points separate seventh and second place.

Stokes, the former Geelong and Essendon player, told The Age’s Real Footy podcast Melbourne were flirting with their form heading into finals and it could bring them unstuck in September.

“The one thing I learnt over probably eight years of playing finals is you can’t switch it [your best game] on when you want to,” Stokes said.

“It’s these remaining four games [of the home-and-away season] where you really need to hone how you want to play. The moments matter, and your effort.

“I think with Melbourne, they’re really flirting with their form, and you can’t do that in finals. And especially this year, with it being so open, and I genuinely think, without being biased, I think Geelong are the No.1 team and I think there’s a fair bit of distance between them and second. 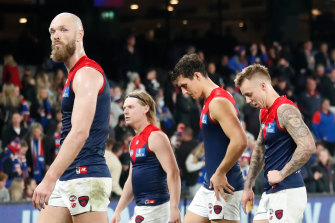 The Demons have won three of their last eight games.Credit:AFL Photos

“So when that happens, if you’re off your game, and I think there’s only one game separating second from sixth or seventh, to be able to flirt with your form as much as Melbourne have over the last eight weeks shows that they’re probably not prepared coming into finals to be able to sustain their game as long as they need to.

“And I think the difference between last year and this year is that they [could] sustain that type of game style for 110 minutes out of 120 [in 2021], where now, they’re only sustaining for 80 minutes. And that 20 minutes they give up, they’re getting exposed pretty quickly.”

It has been well-publicised that Melbourne players sat down before the 2021 season and addressed the need for a more selfless style. In the second half of 2022, Stokes said, there had been a shift from a team-first mentality that was costing the Demons.

“And it’s not attitude in a bad way. But when you’re picking and choosing your moments in a game to go hard, or not to go … whether you want to push really hard in defence to give your defenders a chop out; whether the small forwards are constantly putting [on] the forward pressure that they need. Are the midfielders spreading as much as they need to, to be able to keep up with another team that’s spreading as hard as they are? Even some of the stuff that you see sometimes in the forward line, not giving to better players in better positions.

“They all combine … from an outsider looking in, as saying … ‘[is the] attitude right, that it’s all team, team, team’.”

He said the shift in mindset could be a flow-on effect from a number of different things, including going from being the hunter to the hunted.

“All it takes is for you to be 5 per cent off, 2 per cent off your game, or waning your attitude towards a ‘team, team, team’ attitude. And I think the reason why they were so dominant last year, and early this year, was like you were saying – [back then] everything was about the team.”

Keep up to date with the best AFL coverage in the country. Sign up for the Real Footy newsletter.