Floral fireworks! Alliums will light up the late spring garden

Alliums are a major part of our late spring display. They are spectacular plants, from the smallest chive flower to the crazy explosion of Allium schubertii, of which more later.

The first to appear is A. hollandicum (also known as A. aflatunense). It is about 90cm (3ft) tall, with lilac flowers fringed with a silvery halo.

There is a white form, too. As the flowers emerge, the colour shows through the thin tissue of sheath and they look like flat-topped thistles, but then open out to a cylinder.

The leaves, which fold halfway along and droop in an idiosyncratic manner, have a tendency to start to die back at the tips before the plant comes into flower. This is not due to any illness or problem – it’s simply a common feature of early alliums that the foliage dies back before the flowers fully open. 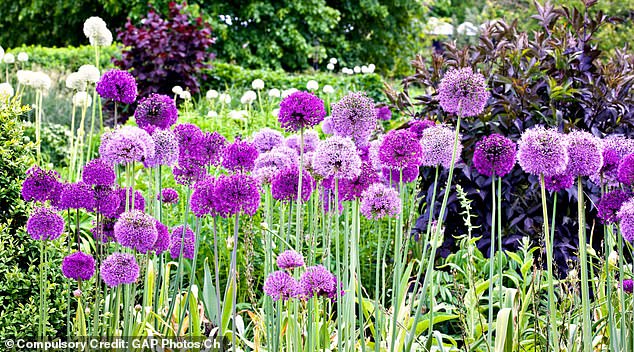 Monty Don says that Alliums are a major part of the late spring display. UK-based garden expert describes A. hollandicum as a purple sensation, which is followed by A. cristophii (pictured)

A. hollandicum ‘Purple Sensation’ – which is both purple and sensational – has lollipop globes made up of scores of individual florets, and they create an open carapace of flowers that not only look dramatic and stylish, but are also excellent for wildlife.

The first ones appear here towards the end of April, and by mid-May they are in their pomp. ‘Purple Sensation’ has a richness of colour that makes an ideal foil for the intense greens and yellows of May and June.

As plants, they require nothing of the gardener other than planting, and the best time to do that is autumn – although I have successfully planted the bulbs as late as February.

A. cristophii follows in mid-May, with its huge, exploding balls of flower. They work well with softer companion colours than those used with ‘Purple Sensation’, which is why we grow them alongside old roses, sweet peas, geraniums and other pale and pastel colours.

MONTY’S JOB OF THE WEEK

For those in the southern half of the country, now’s the time to move or divide deciduous grasses; those north of Manchester should wait a week or so. If you’re dividing a large clump, don’t divide it into many small pieces as they’ll be slow to regrow.

Halve it before replanting at the same level as before and water in well. Water weekly until growing strongly.

Some grasses seed themselves freely and form crowded clumps – just lift and reposition them with more space around them. 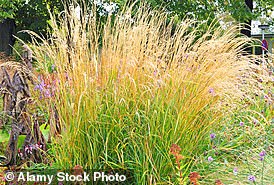 As the flowers fade, the dramatic flowerheads become drier and hold their shape for months on end, albeit without colour. We often collect them in this mummified state to put in a vase, where they last for ages.

Like ‘Purple Sensation’, A. cristophii seeds like mad and needs thinning otherwise it can crowd a border.

And so back to A. schubertii. This ornamental onion takes the exploding flowerhead to another level of artistic extreme.

From a very short stem, the flower flies apart into a ball the size of a melon that is made up of dozens of florets, each on a stalk of a different length.

It can get lost at the back of a border, so put it near the front. It dries easily and will stay in shape to be wondered at for months.

Meanwhile, A. giganteum is a colossal drumstick of a flower, reaching 2m (6ft) tall in our rich clay loam. It is almost like those box or holly bushes that are clipped into topiary pompoms, and one year we had them marching all the way down the Long Walk.

However, the huge bulbs are expensive and need the best drainage possible, as I learnt to my cost.

They will rot very quickly in a wet winter, and we lost the lot. As a rule, this applies to all alliums, which prefer a sunny, well-drained site.

Rather later – and last of the alliums here – is A. sphaerocephalon. It is much smaller than all of the previous ones, and its natural habitat is a meadow.

In late July and August, it makes a wonderful tapestry of conical flowerheads of mauve and ruby pink. Its only weakness is that on our heavy soil it tends to flop, but bounded by a box hedge, it will tumble onto that rather than fall right over. 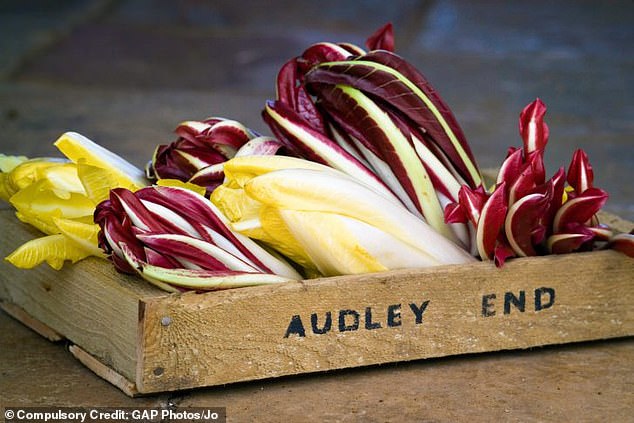 Chicory will transform a salad by adding a delectably bitter tone to an otherwise bland mix of leaves. I’ve grown many types of chicory but there are two that I continue to return to.

The first is radicchio and the two varieties I like best are ‘Rossa di Treviso’ and ‘Rossa di Verona’. Sow in May or early June, thinning to 23cm (9in) spacing – they need plenty of room.

Keep them weeded and let the loose green leaves grow. In autumn, these will start to droop and should be removed from the outside.

Also remove green leaves falling over the heart. I cover them with a cloche in wet winter weather as they hate damp air.

Cut the hearts when they’re bigger than a tennis ball and they’ll regrow into spring.

The second chicory I grow is endive, especially ‘Cornet de Bordeaux’ and ‘Frisée de Ruffec’. If they’re too bitter for you, tie their leaves together gently with string for a couple of weeks before cutting – this restricts sunlight to the inner leaves, resulting in a milder taste.

Unlike radicchio they tend to bolt in hot weather, so sow fresh supplies every few weeks.