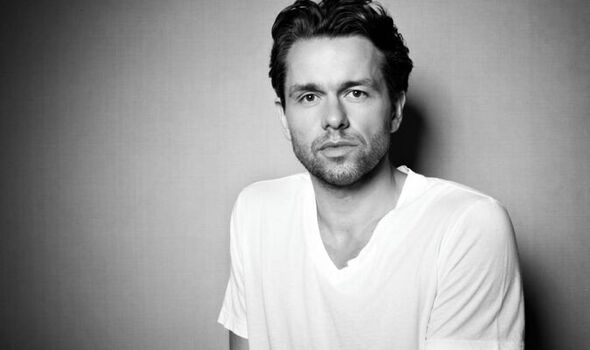 This week he opens in a new stage production of the much-loved but controversial movie South Pacific, playing leading man Emile de Bacque.

It’s best remembered for its wonderful songs, including Some Enchanted Evening, I’m Going To Wash That Man Right Out Of My Hair and, of course, There Is Nothing Like A Dame, parodied so brilliantly by Morecambe and Wise assisted by an all-singing, all-dancing chorus of male newsreaders.

In fact, its creators Rodgers and Hammerstein wanted their 1949 musical – about an American nurse who falls for a Frenchman living on a South Pacific island but shuns his mixed-race children – to send a powerful message about the evils of racism.

Julian admits: “I’d had a slightly jaundiced view of past productions and the (1958) film which now seems rather outdated, particularly in the depiction of the islanders, which strikes me as being two-dimensional.”

But a fresh look at the old story with modern eyes suddenly seemed eerily timely. “We’ve all been going through a prolonged period of isolation,” he says. 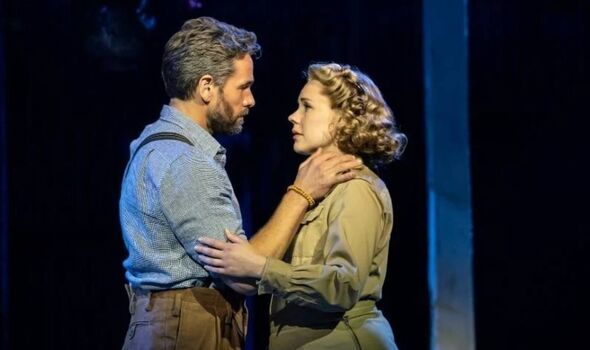 “There’s been a fundamental reappraisal of racism. So, an examination of how people – not only men and women but different classes and races – exist on an island struck me as newly relevant.”

“Along with Show Boat, South Pacific is perhaps the greatest anti-racist musical ever. It was way ahead of its time, one of the reasons it won the Pulitzer Prize.”

But Julian, 45, did harbour misgivings, such as the age gap between his character and the leading lady.

“I’ve always been a little uneasy that Emile is often played by a very much older actor than Nellie, rather like Henry Higgins and Eliza in My Fair Lady,” he says.

“But, if you collapse the age difference” – Gina Beck who plays Nellie is only five years Julian’s junior – “you can make it sexier, more desperate.”

After all, there’s the (second world) war going on, something else that resonates with a contemporary audience given the situation in Ukraine. That said, I’ve always liked the way Rodgers and Hammerstein leave the ending quite messy.

“Yes, love prevails but not in an unbelievably neat and tidy way. And then there’s that wonderful score.”

Unsurprisingly, he struggles to nominate one favourite number. “Some Enchanted Evening is one of the great songs of all time,” he says. “I love the Twin Soliloquies Emile and Nellie sing at the start of the show. And This Nearly Was Mine is a heartfelt cry to the gods at the evening’s end.

“Their great strength, unlike in so many jukebox musicals, is that the songs also advance the story.”

The production opened to glowing reviews in Chichester earlier this year and has recently spent a week in Manchester.

Now, previews have just begun at Sadler’s Wells where the show will run until August 28 before embarking on a tour taking in Dublin, Newcastle, Birmingham, Glasgow, Cardiff, Nottingham, Edinburgh, Leeds and Canterbury.

It looks set to be another hit in a career that has already included Merrily We Roll Along, Annie Get Your Gun, Oklahoma!, Show Boat and, in 2012, Finding Neverland, an experience he won’t easily forget. The producer was Harvey Weinstein. 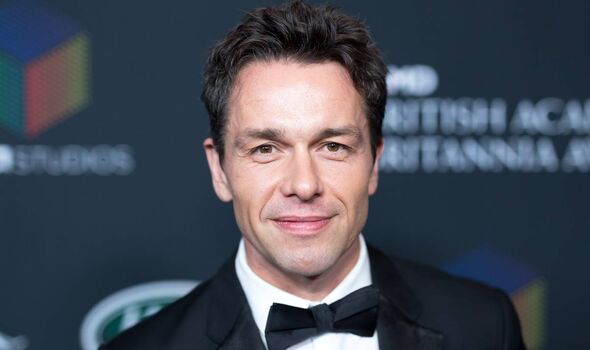 “I was enormously impressed by his energy and commitment to the project,” Julian admits.

“I don’t think I’ve ever worked with anyone so bullish, so single-minded in making something successful. But that came at a cost. He was a bully. I certainly witnessed some behaviour that was out of line.”

“He obviously has demons, the flipside, if you like, of what he was good at. He couldn’t control his temper or how he behaved towards women.”

“As much as it was an exciting time in my life, it was also pretty fraught. So, when his dark side was exposed, I don’t think it was a surprise to anyone.”

“I didn’t know the extent of what he’d done but we were all aware of the fact he treated people – and especially women – without respect.”

And so to happier projects on the small screen, all hits, the most recent of them being Bridgerton.

Julian sure can pick ‘em! He laughs. “I’ve been very lucky,” he says, modestly.

“It was my first screen job and opposite someone, I regard as a brilliant actor. He taught me economy, lightness of touch, stillness. He showed me how you can do more with less.”

What of the show’s other star I ask, Honeysuckle Weeks, an actress known in the business to be slightly eccentric? Julian’s eyebrows shoot into his hairline.

“Slightly?” he says. “I remember once she brought a dog on set. He was huge. I don’t know whether she owned it or whether she’d found him somewhere.”

“Anyway, she left him in her trailer while she shot a scene.”

“On her return, the interior of the trailer – the décor, upholstery, the flooring, every element of it – had been completely trashed. Very Honeysuckle.”

“She has chutzpah. And she’s a great laugh, an original who doesn’t take herself too seriously, a thoroughgoing eccentric.” 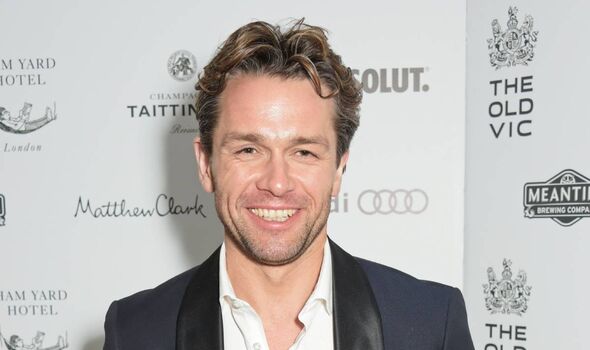 As Charles Blake in Downton, Julian played one of Lady Mary’s suitors.

“I was quite proud of the relationship we created; I only had two seasons’ worth of time with her which meant there was a limit to what I could do.”

“But it was already an established international hit so I was conscious of not mucking up. That exerted a bit of extra pressure. I couldn’t have been made more welcome by the existing cast, though. Michelle [Dockery] and I got along really well.”

He had no idea, by contrast, that the first series of Bridgerton was going to become such a global smash.

“But it had a lot of things working in its favour, not least that everyone was locked down in their homes. And it was very beautiful to look at and very well-crafted.”

He enjoyed playing the gay Henry Granville, Lord Wetherby’s lover, as much as he did his cameo as Bobby Kennedy in The Crown.

“But I’m ready now for a more substantial role in something of quality,” he says.

So, how would he describe himself: a singer who acts or an actor who sings?

“Neither. I’m an actor and a singer. In this country, we seem to get pigeonholed. People don’t like it if you do more than one thing.But my view is that I only have one life: I want to do it all.”

“Hannah Waddingham who’s done 15 years of West End musicals has only recently broken through in the hit TV series, Ted Lasso. She made this very point in her acceptance speech when she won an Emmy. Doing musicals requires real discipline and dexterity. It’s no less an art form than straight acting.”

The rather dashing Julian tends to be associated with upper-class roles and, indeed, he was educated at Eton and Oxford. But, before you jump to any conclusions, he wasn’t born with a silver spoon in his mouth.

“I’m not posh,” he insists. “The preconception is that I come from privilege and money.”

In fact, his father, John, is Chaplain to the Queen in charge of the private chapel in the Great Park at Windsor. 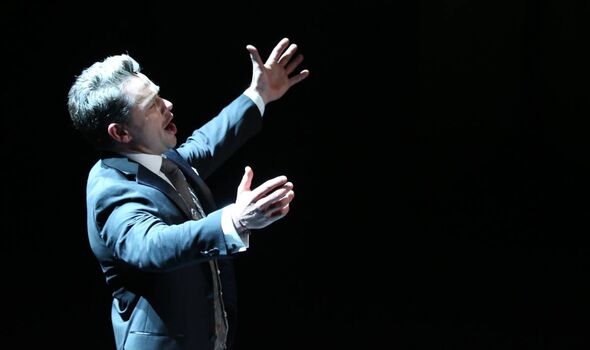 And it was Julian’s musical prowess that won him choral scholarships to those two great seats of learning.

“My father certainly isn’t wealthy,” he says. “When I was still living at home, he’d get £15 for conducting a wedding or funeral and I’d get £20 for playing the organ.”

Julian is married to opera singer, Kate Royal, 43, a lyric soprano currently singing at the Garsington Festival in Buckinghamshire. They have two children: Johnny is 12, Audrey 10.

“We used to take them everywhere with us but we’re now rather more constricted because of the demands of school,” he says.

Kate will soon be off to perform at the Colombia Opera Festival while Julian will be caught up in South Pacific.

“So that will involve various permutations of childcare and grandparents. It requires a fair bit of organisation. But it’s never the same in our house.”

He’s not complaining. “I enjoy the mix of my life, the variety. I never stop wanting to try different things, to work with dynamic people. I can’t see myself ever retiring. I just want to keep going, keep getting better. I feel very optimistic about what’s to come.”