Federal acting chief medical officer Paul Kelly has welcomed the approval of coronavirus vaccine Moderna in the US but will not commit to rolling out doses faster in Australia, saying emergency use of the jab is currently not necessary.

Millions of people in the US and the UK are expected to have had the shot before local distribution of the vaccine in Australia is scheduled to begin in March.

In the US, which is regularly recording 3000 deaths a day, Moderna doses are set to arrive next week following approval for an emergency rollout by the Food and Drug Administration on Saturday. European regulators could authorise its use as soon as January 6. 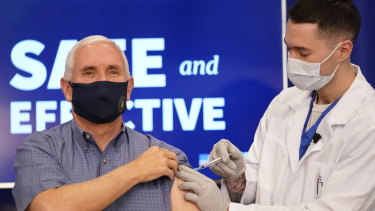 US Vice-President Mike Pence was given Pfizer’s COVID-19 vaccine on live television.Credit:AP

Professor Kelly said the step was "good news" and Australians health authorities were in contact with the company about what might be available locally.

The federal government currently has vaccine agreements with Astrazeneca, Pfizer/BioNTech and Novavax. Britain, Canada and a few other countries already have cleared the Pfizer shot, with a European Union decision due Monday, local time. The Moderna vaccine is similar to the Pfizer vaccine but has the advantage of not needing to be stored at extremely cold temperatures.

"In terms of timing they do of course need to get through the regulatory approvals here in Australia," Professor Kelly said, adding the local independent Therapeutic Goods Administration is in "constant" discussions with the FDA and other international groups.

"We’ve said all along we’re aiming for March. That will be on the back of the TGA giving their full approval. We’re not going to rush that," he said on Saturday. "Safety is our first priority."

Australia has had very few cases of coronavirus compared to the US and the UK, however the new cluster on Sydney's Northern Beaches has prompted new restrictions amid concerns of a larger outbreak.

"Despite this issue that is occurring in Sydney the rest of the country is doing very well, we don’t need an emergency use of vaccine right now," Professor Kelly said. "What we need is exactly what is happening in the Northern Beaches of Sydney and those rings of containment."

He said the information so far about the Pfizer vaccine was that it appeared to be safe, including trial evidence from tens of thousands of people receiving a dose.

"Millions of people will receive that vaccine in the US, the UK and other places over the next month or so. That will give us much more information to work with," he said. The UK started its roll out on December 8 and has been prioritising those who are over 80 years old.

Among the 140,000 in the UK who have received a first dose of the Pfizer COVID-19 vaccines is billionaire News Corp executive chairman Rupert Murdoch and his wife Jerry Hall. The 89-year-old media doyen has been isolating in Oxfordshire. Actor Sir Ian McKellen, who is 81, has also received a dose. Both have encouraged others to get a vaccine when it becomes available to them.

The London Telegraph, citing unnamed government sources, said Britain was on track to vaccinate the 20 million most vulnerable by March. There are about 67 million people in the UK. US Vice-President Mike Pence, his wife Karen Pence and Surgeon General Jerome Adams had a vaccine on live television.

Professor Kelly said the plan "all along" in Australia had been to start providing doses of a vaccine in March with vulnerable people and health workers to be prioritised. However, he didn't rule out speeding this up. Already the government is expected to approve some vaccines as soon as January, about two months earlier than expected.

"If it happens to be earlier, we will work with that. For the time being, we are talking about March," he said.