The Morrison government says employers must abide by existing obligations to stamp out sexual harassment as it comes to a final decision about the extent of legislative change needed. 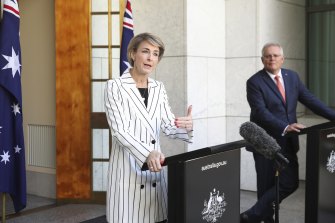 In the government’s response to Sex Discrimination Commissioner Kate Jenkins’ landmark [email protected] report, it noted a recommendation to put the onus on employers to eliminate sexual harassment within their workplaces.

Attorney-General Michaelia Cash pointed out there was an existing positive duty within WHS laws and said the government would assess whether changing the Sex Discrimination Act would “create further complexity, uncertainty or duplication”.

“Our response will be guided by the principles of simplicity and clarity to make the law easier for Australians to understand and access,” a spokesman for Senator Cash said on Friday.

“It is important to reiterate that the government’s response is driven by simplifying the current legal and regulatory environment for victims of sexual harassment. This doesn’t, however, absolve employers of their current obligations to make their workplaces safe for everyone and free of sexual harassment.”

The [email protected] report said since the WHS positive duty already existed, adding it to the Sex Discrimination Act would not substantially increase the burden on employers. The two sets of rules “would work in a mutually reinforcing way”.

Ms Jenkins has offered to give the government evidence provided to her inquiry relating to this point. She said it would be a missed opportunity not to add the positive duty to the Sex Discrimination Act.

University of Sydney employment and gender expert Marian Baird, who was on the [email protected] reference committee, said the system needed to be strengthened.

“The fact that it comes out as a recommendation is because the current system under work, health and safety laws isn’t apparent or obvious enough for complainants,” she said. “I don’t think it creates more complexity. It also … gives employers an opportunity to act on [sexual harassment] as well.”

The government this week agreed to enact changes to industrial relations laws to make sexual harassment “serious misconduct” and clarify it was a sackable offence.

Workplace health and safety expert Kevin Jones said it was understandable there had been more focus in the WHS system on physical harm due to high rates of worker deaths in the past.

He said in some ways the WHS system imposed a heavier burden on employers than the Sex Discrimination Act because it required them to eliminate workplace hazards. But despite a round of harmonisation, WHS laws still weren’t the same across all states.

“If the government really wanted to have a uniform national positive duty, the best way to do that would have been under the Sex Discrimination Act,” he said. “If they’re not going to put the positive duty in the Sex Discrimination Act they, therefore, must be more supportive of the work, health and safety processes and they need to resource those up.”

Zana Bytheway, the head of employment rights legal centre JobWatch, agreed, saying workplace safety inspectors were already “incredibly stretched”. As well, WHS laws applied only to current employees – meaning if someone left a job because of harassment there was no further recourse.

Workplace safety ministers, including Senator Cash, will further discuss the [email protected] response and changes to WHS laws in May.

At National Cabinet on Friday, the states and territories agreed to make their own responses to the Jenkins report by the end of June. A special in-person National Cabinet meeting in July will examine all programs relating to women’s economic security, with a view to making a national plan akin to the one to reduce domestic violence.

Prime Minister Scott Morrison said all governments had a role to play to boost women’s economic security as well as women’s safety.