Hannah Ann Sluss and Madison Prewett are doing just fine after their breakups from Peter Weber.

Though it may not seem like it, it was just one week ago that viewers watched the season finale of The Bachelor. During the two-part finale, Peter and Hannah Ann got engaged, but later split when the pilot told the model he couldn’t give her his whole heart. Bachelor Nation later saw Peter reunite with runner-up Madison, to the dismay of his family. However, days after the finale aired, Peter and Madison announced their breakup.

On Monday night, Madison took to Instagram to remind everyone that it’s only been seven days since the finale aired.

“Well this Monday is a little different,” Madison wrote, while also sending well wishes to everyone who is currently practicing social distancing amid Coronavirus concerns. “Also hope everyone is staying safe.”

In response to her post, Madison has been receiving a lot of love in her comments, including a sweet message from Hannah Ann.

So, it seems all is well between these two strong women! 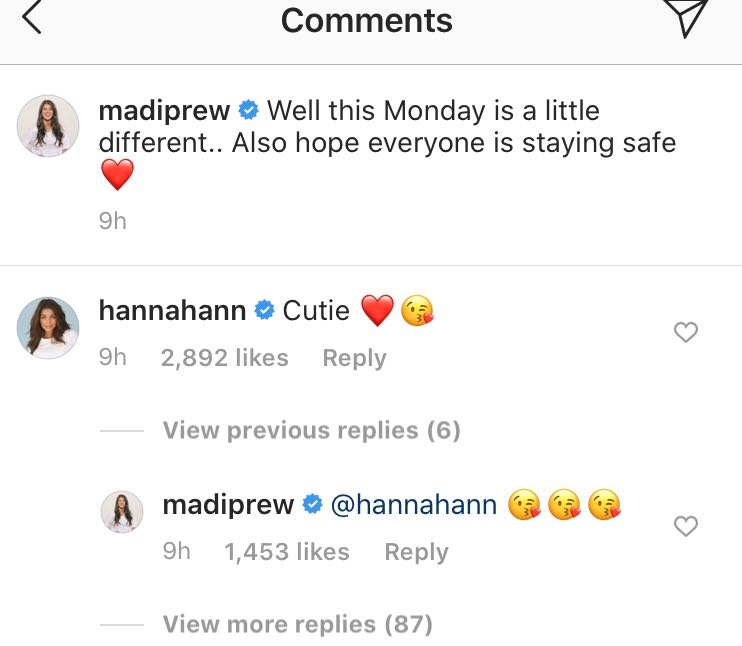 Following her breakup with Peter last week, Madison took to Instagram to send him a loving message.

“As Peter and I have decided to go our separate ways, I am confident that we will both move in the direction of our purpose and never forget that God has a plan in all things,” she wrote. “I will always love and respect him. I am convinced our paths were meant to cross and we are both better because they did. @pilot_pete you are an amazing guy and I’m thankful for you. I will always be your biggest fan.”