There's a moment in the fourth episode of season 2 of The Other Guy that perfectly captures the world view that informs this likeable, honest, and occasionally hilarious show.

"May Dad and Winnie live long and happy lives together," says AJ (Matt Okine) at a kind of ad-hoc cleansing ceremony out in the bush involving his father and soon-to-be-wife. "And please, please leave me just enough inheritance for a two-bedroom apartment, closer than Parramatta." 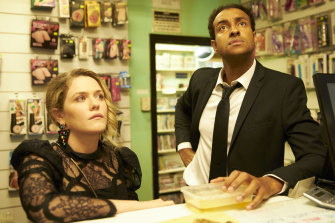 Stevie (Harriet Dyer) and AJ (Matt Okine) quickly put their differences aside in season 2 of The Other Guy.

The first season of The Other Guy was driven by AJ's struggle with the realisation that his girlfriend of a decade, Liv (Valene Kane), had been cheating on him with his best mate (and flatmate) for half that time. And now she's pregnant. Possibly to AJ. Ouch.

AJ is reconciled with best mate Stevie (Harriet Dyer) too, though his job as a radio DJ is gone and so, it seems, are his career prospects. He may have one avenue out, though: his agent Miranda (Claudia Karvan) thinks his sad-sack story has the makings of a TV series.

"Did that all really happen," she asks him.

"Unfortunately, yeah, it did."

"Great," she says. "I mean, it's not great. But it is really great, because I just pitched it to the head of comedy for one of the new digital channels, and she thought it was hilarious."

That exchange comes at the end of the first episode. Over the next five, AJ is busy making the show – a show that is remarkably similar to season one of The Other Guy – while fending off the threat of legal action from Liv. It's a neat conceit, a metanarrative that prompts you to wonder just how much of this is a case of art imitating art-imitating-life.

There's a second narrative arc, too, this one involving Stevie's quest to get her driver's licence (another generational marker: the thirtysomething who has never learnt to drive) so she can travel to the Big Bilby in Bundoona before it closes down forever.

It's a journey her father had promised to take her on before he left home with another woman when Stevie was just seven. Now he's dead – the reconciliation with AJ happens at her father's funeral – and he's left her with nothing but a mouldy caravan and a bunch of unfulfilled promises.

Stevie is once again the funniest character in the series – and the saddest. Dyer is brilliant, making Stevie's hard-drinking, hard-loving, hard-living excesses both endearing and desperate.

And in a way, that's the key to the show: the kind of behaviour that looks like liberation at 25 can seem a lot like a prison at 35, and these characters are all teetering on the cusp (Dyer is about 30, Okine 34). But how are you supposed to grow up when there's no room for you in the so-called "adult" world?

Reviewing the first season of The Other Guy two years ago, I wrote that "while it's billed as a comedy, it's really a drama about failed relationships and a failing man".

This time around, the laughs come far more readily. But I reckon The Other Guy still has something serious to say too – not so much about a failing man, perhaps, as an entire flailing generation.