Federal Health Minister Greg Hunt, who has overseen the co-ordination of Australia’s medical response to the coronavirus pandemic, has been admitted to hospital with a suspected infection.

Mr Hunt’s office issued a statement on Tuesday evening confirming he would be kept overnight for observation and was being administered antibiotics and fluid. 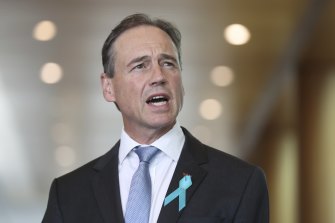 Health Minister Greg Hunt will take immediate leave after he was admitted to hospital with an illness. Credit:Alex Ellinghausen

His office said he was expected to make a “full recovery” and his condition was not considered to be related to the vaccine.

The father-of-two was first elected in November 2001 is one of only three Liberal MPs, along with Prime Minister Scott Morrison and Home Affairs Minister Peter Dutton, to have served in federal cabinet since the Coalition came to power in September 2013. He has held the health portfolio since January 2017. 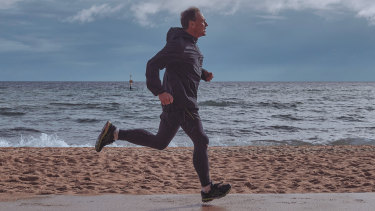 Mr Hunt, who represents the federal Victorian seat of Flinders in south-east of Melbourne, is an avid runner and has completed seven marathons, telling Good Weekend last year that his daily exercise was “like oxygen”.

“If I have running and family … then I can cope with everything else,” he said at the time.

His illness means he will be among three Morrison government ministers absent from Wednesday’s federal cabinet meeting, with federal Attorney-General Christian Porter also on indefinite leave after the fallout of a historical rape allegation, which he has vehemently denied.

Mr Porter said last week he would take a “short period” of leave to assess his mental health on the advice of his doctor.

Defence Minister Linda Reynolds announced at the weekend she would extend her medical leave until April 2, meaning two of the eight national security committee members are absent from their duties.

Senator Reynolds said on Sunday she was re-assessed last week by her cardiologist in relation to a pre-existing condition.

She was forced to cancel a speech to the National Press Club earlier this month amid intense scrutiny over her handling of a rape allegation raised by former staffer Brittany Higgins.

Mr Morrison said on Tuesday he had personally spoken to Senator Reynolds’ doctor about her extended medical leave.

“I have, at the minister’s permission, spoken to her doctor about this issue and it is a serious issue,” Mr Morrison told reporters in Sydney. “And so we are supporting her in getting the physical health treatment that she needs over this period, that doctors have advised that she needs to take.”