It won't win her a record-setting third Booker Prize, but Hilary Mantel says The Mirror and the Light is the best novel in her much acclaimed Thomas Cromwell trilogy and it must be acknowledged that the cultural climate determines how a book is received.

The British novelist was a favourite to win the major literary prize – which she claimed with Wolf Hall in 2009 and Bring Up the Bodies in 2012 – but was missing from the Booker shortlist announced last week. 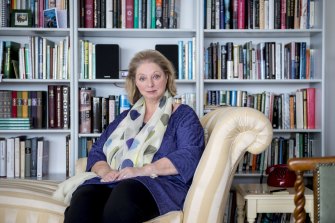 Hilary Mantel was a favourite to win the Booker Prize but was missing from the shortlist announced last week.Credit:Andrew Testa

Speaking to this masthead before the release of an essay collection next month, Mantel was reluctant to directly address the shortlist which has drawn attention for being the most diverse in the prize's history.

But asked if prizes should reflect the political context, Mantel said: "I think a book is born into a cultural moment and any book is carried on the cultural tide so we just have to acknowledge that."

There were four writers of colour, four women and four debut authors among the six authors, while literary heavy-hitters including Mantel, Anne Tyler and Colum McCann missed out.

"Naturally I'm disappointed but you can't second guess the judges. I am sure they had a huge range of excellent novels to choose from and I make no complaint," Mantel said. "I don't think it's for me to express an opinion because I am an interested party."

Bernardine Evaristo, who last year was named joint winner of the prize with Margaret Atwood, posted on Twitter that it was a "groundbreaking shortlist for the 21st century". But other commentators criticised the shortlist, including The Times which described Mantel’s omission as a reflection that the Booker was more interested in launching new voices than being a "guide to the best novels published in Britain", while the UK Telegraph declared “the Booker has abandoned Britain”. The shortlist has also prompted consideration of literary prizes and what role they should play in addressing a historic lack of diversity among nominees and winners.

Mantel said she thought The Mirror and the Light was the best novel in her best-selling historical saga which follows the rise and fall of Thomas Cromwell in the court of Henry VIII.

"It was the most complex, it was the hardest to write and it's probably the most demanding for the reader but of course that's just my opinion of it," Mantel said.

The Booker's chair of judges, Ghanaian-born British publisher Margaret Busby, said the panel, which included authors Lee Child, Lemn Sissay, Emily Wilson and critic Sameer Rahim, made their decision "on the basis of what we thought of the books we were given, not on nationalities".

"Each of us makes judgments through the prism of who we are and what we have learnt or internalised. That's why diversity has always been important. Diversity is reality," she told The Guardian. "The scope of this year's books has allowed us to luxuriate in skilful storytelling and be surprised by what unheard voices have to articulate."

Child said Mantel's novel was "absolutely wonderful" but "good as it was, there were some books which were better.”

Mantel said when she was on the Booker panel in 1990 she did not consider questions of an author's background but said it was a near "impossible task" for judges to agree on a shortlist.

"I can honestly say that in my year we made a judgment purely on literary quality," she said.

While Mantel said it was not for outsiders to comment on the shortlist, she would "prefer the judges to keep their cards close to their chest".

"It is up to the judges whether they talk about it outside of the meeting room, personally I never did," Mantel said. "While I was a judge, I made no comment on any of the books that were under consideration but many years have passed since and obviously there is fresh thinking." 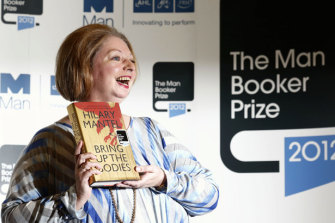 Author Hilary Mantel accepts the Booker Prize for Bring Up the Bodies.Credit:AFP

Mantel said “blind judging” – where judges are not told the authors of the entries – could work for prizes for debut writers but would be impossible for other literary awards.

"Well let's put it this way, if it was the third volume, if it was a book about Thomas Cromwell, I think they would know it is me and to be honest if the judges just couldn't pick the authors, I wouldn't think very much of their literary acumen. It might work for first novel prizes but people do tend to develop distinctive voices and of course it might lead to mischievous writers imitating each other. I bet quite a few of us could knock off a Martin Amis," Mantel said.

Mantel said American writers offered an "infusion of fresh energy" and Commonwealth writers should not be afraid of the competition, but noted the rule change for entries had affected how publishers select which of their titles they put forward for the prize.

For now, Mantel is working on adapting the The Mirror and the Light for the stage. She has short stories she would like to revisit, and ideas for books, although she is unsure whether her next will be fiction or non-fiction. Mantel will also publish a collection of essays, Mantel Pieces, in October.

"When the shortlist came out last week there was something I could draw a line under and I could say, right, that's over, here's a new phase. Although disappointing on one level it was quite freeing on one level," Mantel said.

And when the Booker Prize is announced on November 17?

"I probably won't think about it to be honest. I mean, I am very pleased for the writers who are on the shortlist, it is a new beginning for them, but I have plenty of projects in me. If i've got the energy to carry them through, I am certainly not short of ideas."

Mantel Pieces will be published on October 7 by 4th Estate.