How Lisa McCune came to love the role that scared her

You wouldn’t think there’s much in showbiz that can scare Lisa McCune, the Logie-showered TV star whose triple-threat stage skills lurk under an unassuming, disarming, friendly frame.

But when she read the script for Girl From the North Country, the hit musical that wraps a Conor McPherson Depression-era drama around re-composed Bob Dylan songs, she was overcome. 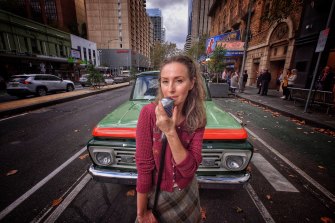 Lisa McCune at the press call for Girl From the North Country at Melbourne’s Comedy Theatre.Credit:Luis Enrique Ascui

“I read it and then saw it during [Melbourne’s] lockdown six and I really was impacted by it,” says the 51-year-old. “I thought, ‘Is this COVID or is this because I’ve been locked up so much?’

“But I do love to do things that I find a bit scary now, because I feel like I’ve got to – or I’m not going to grow. This is a play, but with music. It combined my two worlds and I went, ‘That’s what I want to do’.”

Not to give too much away, hers is a particularly challenging role: the wife of the owner of a 1934 Minnesota guesthouse, she drifts between reality, paranoia and disinhibited mania as early-onset dementia slowly claims her.

McCune says it was easier, in a way, to step into a role that had already been created by the cast in the West End and Broadway – this production (which opened in Sydney in January) closely hews to the original. 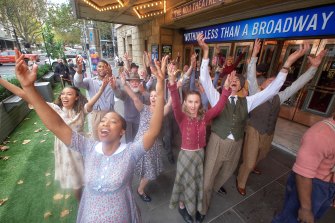 But she still threw herself into research last year, to really understand the part.

“I always like doing the reading and it was fascinating because I had the time,” McCune says. “I had a friend who was very wonderful and let me meet with his dad. Accessing anybody with dementia was really difficult because of the lockdowns, but I spent a little bit of time with him and I’ve seen his decline over some years.

“Investigating that world, the way the brain starts to break down and how it can manifest itself by being the great disruptor… I learned to love [my character], she’s very truthful, it’s got such a great heart.

“Seemingly it’s a bleak piece, but in fact you’re left with such hope. Time moves on.”

McCune didn’t come into the show a particular Dylan fan – not that she dislikes his music, but she knew only the famous songs: Like a Rolling Stone, Hurricane, Forever Young, Slow Train.

Discovering more (the show crams in more than 20 Dylan works, dramatically reinterpreted for new voices and instruments) was a sheer pleasure, she says.

It’s also a deep pleasure to be back on stage again, after the long COVID theatre shutdown.

“I just wanted to have an audience connection again,” she says. Even thinking about it makes her feel like she’s going to bawl her eyes out.

“I wanted to feel what that was like again, and to make sure it didn’t disappear. To go out and say, ‘Hey guys, we’ve still got to go to the theatre’ – a really overwhelming feeling to do that.”

She senses a mirror of her relief and joy in the audiences that rise to their feet after the show’s closing number, the transcendent, spiritual crescendo of Pressing On.

“Shake the dust off of your feet, don’t look back / Nothing now can hold you down, nothing that you lack.”

But, McCune being McCune, she doesn’t want to sound too grand about this.

“Ultimately, we want an audience to have that very simple experience of rocking up to a theatre, hearing the stories, getting something from it… and perhaps if we’re lucky they think about it a couple of days or years later and go, ‘That was such a cool piece of theatre’.”

Girl From the North Country opens Friday and runs until June 2. northcountry.com.au.