How people celebrate Hanukkah around the world

This year, Hanukkah will start on Sunday, Nov. 28.

The eight-night Jewish Festival of Lights commemorates the rededication of the Second Temple in Jerusalem, which reportedly dates back to the second century B.C.

8 COCKTAILS TO MIX FOR EACH NIGHT OF HANUKKAH

According to National Geographic, the Talmud, a Jewish holy text, states that Hanukkah acknowledges the Maccabean revolt the Hebrews led against the Hellenistic influence that was being imposed by Greco-Syrian Seleucid rulers. 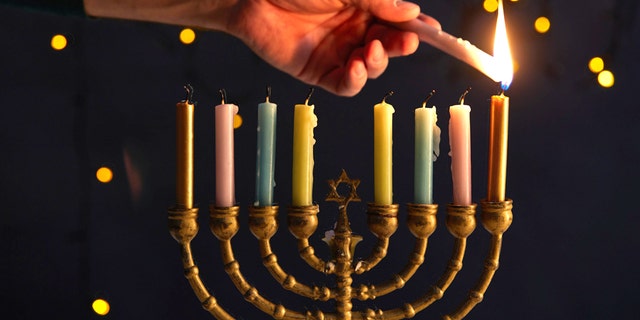 Many Hanukkah observers display their menorahs in areas where the holy candelabrum can be viewed by inhabitants and guests.
(iStock)

The holy text reportedly goes on to say that a miracle of light occurred when Judah rededicated the Temple after the revolt. A single intact vial of oil was found inside the desecrated temple and it burned for eight nights, according to the Talmud. Several millennia later, Hanukkah still celebrates the miraculous moment when light reportedly overcame darkness.

THIS IS THE MOST COMMON DAY AMERICANS DECORATE FOR THE HOLIDAYS

Jewish people around the world observe the holiday with a special Hanukkah menorah, which has nine candle arms. The center candle – also known as the Shamash or helper candle – is used to light the other eight for each night of Hanukkah. The candles are lit and placed in the menorah from right to left. 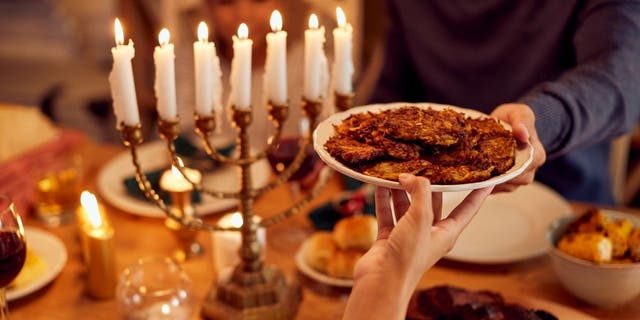 Many Hanukkah observers display their menorahs in areas where the holy candelabrum can be viewed by inhabitants and guests. Other traditions that have become ubiquitous with the Festival of Lights include gift exchanges, dreidel games, chocolate coins and gelt, potato latkes and other fried foods. 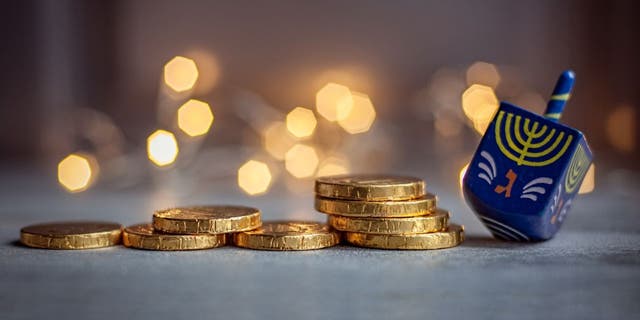 Dreidels and chocolate coins are often given to children during Hanukkah celebrations.
(iStock)

The encyclopedia notes that Hanukkah is considered a national holiday in Israel. Schools are closed but government offices, shops and transportation services operate as usual, according to the Israel Ministry of Foreign Affairs.