How to save on your home energy bills in 2022

Australians are still spending thousands of dollars a year on electricity and gas despite lower energy prices and greater efforts to reduce power consumption at home.

Australians spent an average of $335 per quarter on electricity and $234 per quarter on gas in 2021, according to Canstar’s latest Consumer Pulse Report, which was based on a survey of more than 2000 Australians. 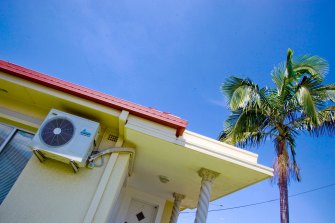 Heating and cooling our homes makes up the bulk of household energy consumption.Credit:Glenn Hunt

While bills were down in previous years – as a fall in wholesale costs continues to drive energy prices down – it’s still a hefty sum, with about a third of people feeling they were not getting a good deal and almost 90 per cent actively trying to use less electricity and gas wherever possible.

Canstar Blue energy editor Jared Mullane said there has been a massive uplift in people looking for the best solar deals on the comparison website over the past year, as consumers look to maximise their investment – with one third of survey respondents reporting having switched to solar to save money on their electricity bill, and more than 3 million rooftop solar systems now installed on households and small businesses across the country.

However, if you’re not ready to make that switch, there are other ways to slash bills both now and in the future.

Get your heating and cooling right

Reducing energy usage and reducing power bills go hand in hand. Being more conscious of how we heat and cool our properties – the biggest energy use in our homes – is key, says Rob Murray-Leach, the head of policy at the Energy Efficiency Council. 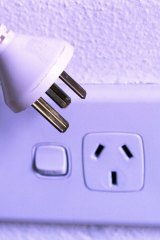 Switching off power points when not in use can help you save.Credit:Virginia Star

Using fans would cut energy usage on hot days, but so could being more careful in temperature selection or choosing fan mode when using an airconditioner, particularly an older unit, Mr Murray-Leach said.

“Every degree warmer you can put it in the summer that is still comfortable for you, that is an extra 10 per cent off your bill … using 24 or 25 degrees is going to save a hell of a lot more energy than if you put it at 20 degrees.”

However, modern reverse cycle air conditioning was very efficient and a cheaper way to heat a home in winter, Mr Murray-Leach added, noting he had been able to cut his winter electricity bill by some 40 per cent by upgrading.

Reducing direct sunlight by closing blinds or curtains on hot days, particularly for west-facing windows, and utilising window shades often seen on older homes, was another simple approach that could make a big difference, he explained. “You don’t want your heating and cooling systems to be fighting against hot sunlight.”

Decent insulation and draught proofing were other key basics, Mr Murray-Leach said, as they helped – at least across most of Victoria and NSW – keep homes warm in winter and cool in summer.

The highest priority was making sure a home was well insulated, which was typically an option limited to home owners rather than renters. Ensuring there was good ceiling insulation to prevent soaring temperatures under the roof from radiating into the home – particularly in homes with dark roofing – was particularly key.

Draught proofing was also essential to retain warm air in winter, and cooler air during summer, he said.

“Now [draught proofing] sounds counterintuitive for summer, but what we’re learning is there is a real difference between a home having good ventilation and a home leaking [cooler air from air conditioning or fans].”

While more home owners were looking to improve the energy efficiency of their home, this was driven more by comfort and a desire for healthier more liveable homes, than reducing energy costs, Mr Murray-Leach noted.

Rethink your approach to appliances

It’s no surprise that old appliances are less efficient and going to have a bigger strain on your electricity usage, said Canstar’s Mr Mullane, a factor that should be considered when weighing up whether it’s time to upgrade appliances or ditch that old second fridge in the garage that you may not really need.

However, new appliances are also not created equal, and he encouraged consumers to take a longer-term view and assess the energy efficiency of new household appliances when the time to upgrade arrived – by looking at the star rating and energy consumption score.

“Weigh up the yearly running costs … to see what you could save over the life of the appliance … you might save $100 or $200 on upfront cost [on a cheaper, less efficient model] but it will use a lot more energy than a more expensive appliance might,” he said.

It sounds simple, but a key step to cutting your energy bills is making sure you’re on the best deal for your household in the first place, said Mr Mullane, with people able to save hundreds of dollars a year by shopping around for a better deal.

“If you haven’t shopped around for a while, chances are you are on a standard offer or default offer … which are much less competitive,” Mr Mullane said, adding that even just asking for a better deal from your existing provider could help.

While many Australians would be in a position to switch, those in the Northern Territory, Queensland and Western Australia typically had fewer options – and less competitive deals – to choose from, he noted. Switching providers would also be harder for those in apartment blocks with embedded electricity networks.

More than a quarter of energy customers (27 per cent) remain on their provider’s default energy contract, and a further 29 per cent do not know what type of contract they are on, according to the Canstar report. About one in five respondents said they switched electricity or gas providers over the past 12 months.

At the very least, people should ensure they know what type of tariff they are on, Mr Mullane said, noting there was no use avoiding using electricity at peak times if you were on a single rate tariff where you are charged the same rate for electricity regardless of the time of day.

The majority of customers were still on such a tariff, which was good for those who need to use energy during peak time periods, Mr Mullane said. Those on Time Of Use tariffs – which apply different prices for electricity at different times of the day – need to be much more aware of when they’re using power.

Other steps to minimise your energy use and bills

Most Viewed in Property