Pauline Menczer says her eyes have been puffy from all the crying.

The forgotten world surfing champion, who drives a school bus for living north of Byron Bay, has been overwhelmed by the success of a campaign to raise the prizemoney she never received for winning the title in 1993. 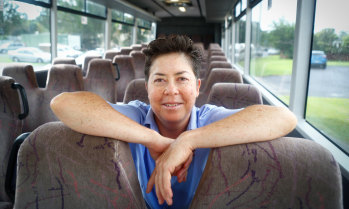 In tears: Pauline Menczer says she has been happy crying.Credit:Danielle Smith

A Herald and Age story on Saturday about Menczer’s tough time on the early women’s professional surfing tour – never able to attract sponsors, receiving only a broken trophy when she became world champion, a long struggle with rheumatoid arthritis then a rare autoimmune disease in the past two years- mentioned two surfing fans had started a GoFundMe campaign to raise $25,000 to donate to her.

It reached the target around lunchtime on Saturday and has gone on to pass $30,000.

Menczer, who lives at Brunswick Heads in the NSW northern rivers, says she was “happy crying” watching the total rise by a thousand dollars an hour throughout the morning.

“I just feel the love,” she says. “The money is a bonus but it’s the love and the feeling of connection again. And the thing that makes me really happy as well is that I’m able to donate to other people.”

Menczer, 50, has decided to donate anything more than the $25,000 target to deserving causes including a man with the same illness in the Philippines who she has previously supported when she could, a disabled surfing association and an autoimmune disease charity.

The money she keeps will take the stress away from her medical expenses to treat an illness that causes painful blisters and burns on her skin.

Filmmaker Chris Nelius, who tells her story among all the women trailblazers on the formative professional tour in the new documentary Girls Can’t Surf, says he was “blown away” by the fundraising.

“She was so unsung for so long,” he says. “For something like this to happen for her later in life, particularly at a time when she’s been struck down with a rare disease, it’s just a feel-good moment.” 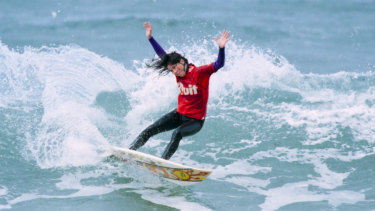 Nelius is lobbying Waverley Council for a statue of Menczer on Bondi Beach.

He believes she deserves the tribute as the only world surfing champion from the iconic break, especially given less than 5 per cent of the country’s statues are of reportedly of women … and most of them are British royalty.