Political expression comes in many guises. For Indigenous communities, there has always been a deep connection to the arts to give voice to our shared experience. Art can describe the trauma, humour and oppression that comes with living in modern Australia as a First Nations person.

In the not-too-distant past, music was used as a form of escapism from the toll daily oppression took on people. Those growing up on missions or one generation removed from mission life would listen to the dulcet tones of Charley Pride, Slim Dusty or Tammy Wynette. The dreamy lament of country music reflected the ache of rural life and also engendered a yearning for times past and the promise of times to come. 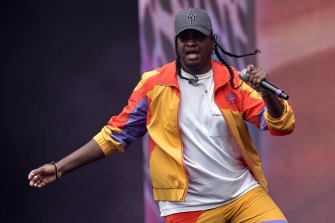 Cut to 2020 and not only have Indigenous listening habits changed, but so has the culture of musical expression. Artists such as Briggs, JK-47 and Baker Boy dominate the Indigenous music scene and have themselves become crossover artists into the mainstream. The music and lyricism of Indigenous hip-hop fights oppression, celebrates identity and calls for recognition of sovereignty.

With the culture wars as a backdrop, hip-hop has given a voice to dozens of Indigenous artists, from Australia's most remote communities to its most densely populated cities. On the surface, the shared connection between the songlines of decaying American urbanity and those of the world's oldest living culture aren't necessarily obvious. So what is it about this form of music that resonates so deeply with so many in First Nations communities?

For Yorta Yorta artist Neil Morris, aka DRMNGNOW, his draw to the music was innate, without a cerebral sense of the link between his culture and the oppressed on the streets of LA and New York.

"Hip-hop connects because of its humble roots in terms of emerging from highly oppressed and marginalised communities of black peoples," he explains on the phone from his home in Mooroopna. "The music itself is driven by strong percussive pulse, it is something that intersects with First Nations music structure from this land where a driving percussive element has been central in song for thousands of years.

"It has always been quite prominent in my mind how you can go from a hip-hop beat, in one breath across to clap sticks and other vocalisations both instrumentally or orally and have it feel so seamlessly interchangeable."

The speaking artform enables artists to cut to the chase, to highlight issues affecting them and their communities in modern Australia. "Even if it's an ugly truth, just say it," says Malyangapa/Barkindji artist Chloe Quayle, aka Barkaa. "For me, it's very simple: hip-hop is about pride, culture, oppression and dispossession. These are themes I draw on to hold a mirror back at those that oppress us."

The connection between Indigenous youth and American ghetto culture began to take root in the mid-90s when the music became more accessible through a number of channels.

Quayle found her voice through hip-hop at an early age. "My brothers had books and books of hip-hop CDs, my mum was into Tupac, so I guess it's all I've ever known," she says. "I found myself inspired by these artists using their platform to speak truth. That's what I try to do through my music." 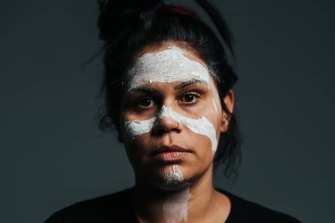 For Morris, growing up in northern Victoria, it took a combination of timing and expediency to create the perfect storm of beats, ideas and attitude to get him hooked on the music. "We had Rage and then pay television launched so we had Channel V playing a lot of rap and hip-hop. At the same time, films such as Boyz in the Hood and Above the Rim also came out and we could see the oppression of other black people reflected how we felt about ourselves."

For others, such as Quandamooka artist Sachem Parkin-Owens, the path was far more direct. "I was born into the culture. My dad is a Blak man born and raised in Tampa, Florida," he tells me via messenger from Brisbane. "From a young age he taught me that hip-hop was only a genre to people outside of the Blak community. To my mob back there, it is more than a genre. It is a lifestyle, it's a culture and it's a way that Blak people are able to connect to each other."

Unlike its American counterpart, Indigenous Australian hip-hop largely avoids celebrating the ostentatious lifestyles of new music barons and the hedonism depicted in its lyrics and video clips. 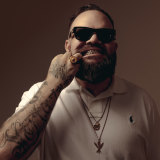 Quayle explains: "You get caught out by the mob straight away if you're pretending to be something that you're not, they don't muck around," she says. "There's also a responsibility to be a positive role model to little girls growing up, to be proud of who they are and our culture."

As early adopters of technology, the evolution of music production has also been a factor in the explosion of hip-hop among Indigenous artists. Whereas previous generations of musicians would lug around masses of equipment and rely on others to be in the same place at the same time, today's artists can record anywhere, with or without collaboration and at a fraction of the cost.

As Morris explains, "technology has had a big impact on enabling artists to not only create but control their artistry to a greater extent … an artist can now function as their own record label … digital technology has led to more and more Indigenous releases."

Even 10 years ago, little of the music produced by Indigenous artists, expressing what it feels like to be oppressed and claiming sovereignty, would have found a home through record labels, let alone a footing in popular culture. For Morris and his contemporaries, the change is an obvious point for celebration.

"Tides have turned and it's amazing — the more of our people's songs out there, the better everyone is for it," he says. "The impact is deep in terms of the personal, societal and spiritual across this sacred land."

Daniel James is a Yorta Yorta writer and broadcaster. He is a contributor to Shaun Micallef's Mad as Hell, hosts the Mission on 3RRR and is the winner of the 2018 Horne Prize.