Insane Ring Footage Shows Suspect Drive Through House, Run Over Deputy as Police Shoot Each Other in Crossfire

Police in Texas have released video footage of a wild chase that left two officers wounded and the suspect dead.

The jaw-dropping encounter, captured on a home Ring Cam and several body cams, culminates with a car smashing through a house, then running over a deputy before the driver is killed in a hail of bullets — with officers even shooting each other in the crossfire.

The incident occurred on September 1 in north Houston; according to Click2Houston, Harris County police received reports of a “family disturbance” at a church parking lot, in which a man was reportedly ramming into other vehicles. 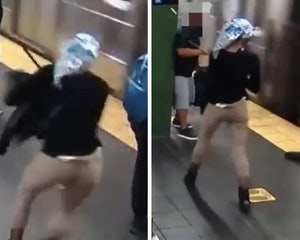 When officers arrived, they observed the car driving on the wrong side of the road, and believed the driver was intoxicated.

They determined the black Volkswagen Atlas SUV had been stolen, and ordered the driver, identified as 39-year-old Omar Hernandez Lazano, to pull over — but he refused. This kicked off a 20-minute high speed chase, as Harris County officers called for assistance from Houston Police Department.

The chase ended at 9:30 PM in the front yard of a home on Mitchell Road — and that’s when things really got crazy:

The Ring cam outside the home shows the SUV, surrounded by police cars, suddenly reverse up the driveway, smashing into the house. Several officers quickly run up to the car, guns drawn, demanding the driver get out.

But instead, the suspect throws the car into drive and speeds forward, running straight over the one officer not quick enough to get out of the way. He is dragged 20 yards up the driveway, before the SUV smashes into the cop car blocking its path.

Chaos unfolds as the officers open fire, unloading dozens of rounds into the SUV from all sides; inevitably, one of the officers is struck, by what police described as a ricocheted bullet.

Body cam worn by Sgt. Grandstaff captured the moment he was hit in the left leg by friendly fire.

His colleague, Corporal Ross can be heard calling for a medic for the deputy who was run over when he sees Grandstaff getting shot.

The deputy who was struck by the car was airlifted to hospital in a critical but stable condition, before being moved to a long-term recovery facility. The officer who was shot was treated at the scene by paramedics.

Lazano meanwhile was pronounced dead at the scene.