Australians wanting to go overseas or return home will have access from Monday to an international proof-of-vaccination certificate, bringing overseas travel a step closer as the country nears the first major vaccination milestone in the recovery plan.

Quarantine-free travel from New Zealand’s South Island will resume from midnight on Tuesday after agreement from Victoria and NSW. Australia is also in talks about expediting a so-called “green lane” travel agreement with Singapore. 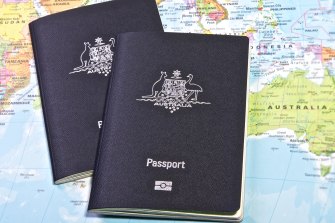 International vaccination certificates will be available to Australians from Monday.Credit:Shutterstock

In a joint ministerial statement, the federal government said the vaccine passport will enable fully vaccinated Australians to travel overseas.

“The launch of the international proof of vaccination is a key step towards safely reopening international borders and supporting Australia’s COVID-19 economic recovery,” said the Minister for Employment, Workforce and Skills, Stuart Robert.

The certificate features a QR code to prove vaccination that is internationally recognised and can be printed or uploaded to compatible COVID-19 travel apps, and can be created through Medicare online and the Express Plus Medicare app.

The certificates will be available two days before travellers from New Zealand’s South Island will be allowed to enter Australia without having to quarantine. Chief Medical Officer Professor Paul Kelly said the change was made because the South Island had recorded zero cases this year, despite an ongoing outbreak on the North Island.

“I understand there are some Australians that have been stuck in the South Island of New Zealand for some time and we’d welcome them home,” Professor Kelly said.

Mr Hunt said he met with his Singaporean counterpart on Friday to discuss an expedited proposal for allowing vaccinated people to travel between the countries without a quarantine stay.

“That’s under, I call it, rapid development,” he said.

Mr Hunt said international travel would resume in three phases: the first, already announced by NSW, allowing fully vaccinated Australians to return, and allowing citizens to leave. The second is for priority visa holders, including students and workers. Mr Hunt said the second phase was still being worked on with states and territories but was “ultimately a Commonwealth decision”.

The third phase would be allowing fully vaccinated international travellers, including tourists, into Australia. Mr Hunt did not tie any of these phases to vaccination rates. But under the national reopening plan, capped entry numbers for priority visa holders would be introduced once the country entered phase B of the plan after 70 per cent of the eligible population are fully vaccinated.

Mr Perrottet said while he agreed the priority for his government was allowing returning Australians to come home, he wanted his federal counterparts to “move fast” on expanding international arrivals to students and tourists.

“Obviously it is a matter for them in terms of how they stage it, but we certainly want to move it, and we want to move fast, because if we can open up safely in this way we will get the NSW economy back on top,” Mr Perrottet said.

“We have already got a plan for international students, but we would like to increase that plan where we can. And obviously in time for the university year next year.“

Victorian Premier Daniel Andrews said fully vaccinated international arrivals would be likely to undergo a short home quarantine once travel resumed, but the matter must be discussed at national cabinet. The next meeting of state and territory leaders and the Prime Minister is on November 5.

“We want to get the place open as fast as we can; quarantine is absolutely changing,” Mr Andrews said on Sunday, noting the state was now in a “fundamentally different phase” of the pandemic.

“We will see international flights arrive in Melbourne and not go to a hotel quarantine, they will instead go home for a period of time and it won’t be 14 days, I think it will be less than that.

“So the rules will be different … but I think we’d all be well served by a national cabinet discussion which I think will happen quite soon.“

The international certificate contains a unique vaccination certificate identifier, the holders’ name, date of birth, gender, passport number and vaccination history, and a QR code as well as signature information for authentication purposes.