‘It’s a relief not to have to be the beautiful one!’ As she stars in new cop caper Darby and Joan, 80s sex siren Greta Scacchi reveals how later life has given her a fresh perspective on her career

You can tell mid-life is having a moment when two of the sexiest stars of the 80s come together on-screen as oldies, hitting the open road to a soundtrack of bangers by Blondie and the percussive clink of a case of Australian white in their motorhome mini-fridge.

Greta Scacchi, 62, and Bryan Brown, now a tufty, grizzled 75, may no longer be the heartthrobs they were back in the days of White Mischief (1987) and The Thorn Birds (1983) respectively, but goodness they still manage to make ‘silver’ look seductive.

Today they star in Darby And Joan as a crime-busting couple thrown together after a chance meeting, each playing the tricky hand the decades have dealt them and clearing up multiple mysteries along the way in a new eight-parter on Acorn TV.

But don’t be taken in by the title – this Darby and Joan are as far from the quiet life as it’s possible to be. By the end of episode one, Greta’s Joan Kirkhope, an English widow, is raging she’s been ‘run off the road, witness to a murder and carjacked by some oversexed pensioner’. 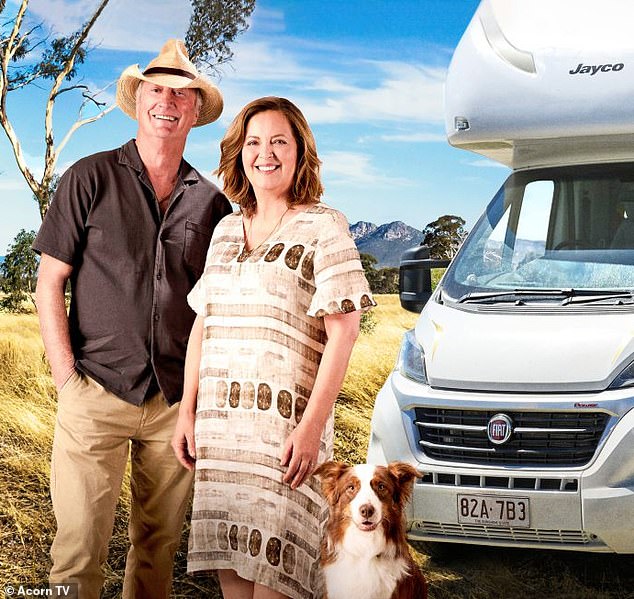 Greta Scacchi and Bryan Brown star in Darby And Joan as a crime-busting couple thrown together after a chance meeting, each playing the tricky hand the decades have dealt them and clearing up multiple mysteries along the way in a new eight-parter on Acorn TV

It’s no surprise to learn that in real life Greta and Bryan are friends, who got to know each other through his wife, the model and actress Rachel Ward, with whom he fell in love on the set of The Thorn Birds. He specifically asked for Greta to be Joan, a nurse, to his ex-detective Darby when the show was being cast.

Perhaps it’s this familiarity that hazes their characters with a will-they-won’t-they chemistry that belies their age and has you cheering for them from the off.

It sounds as if they had fun making the show together too – although Greta confides there were serious issues with a couple of their co-stars out there in Queensland, the scenic north-east of Australia. 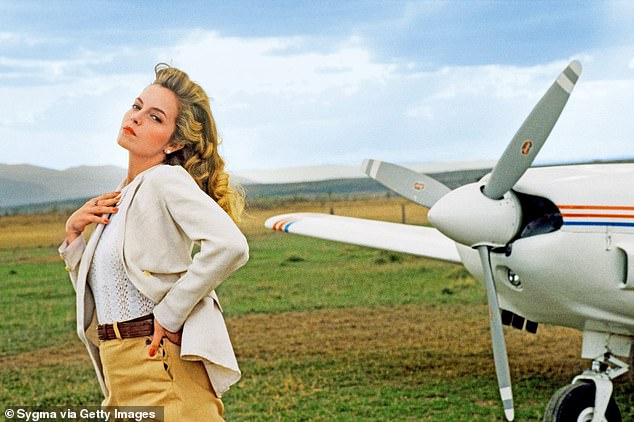 Greta in White Mischief. Her long, successful acting career has taken her around the world with film and theatre jobs in Europe, America and Australia

‘I find it hard to keep my mouth shut. It’s one of my problems, wearing my heart on my sleeve and then being dismayed to find other people don’t share the same values,’ she’s just told me, so I think I’m about to get the skinny on some on-set scandal.

But actually she’s talking about the two dogs that shared the role of Darby’s white-andbrown Australian shepherd Diesel.

‘They were so temperamental. Diesel One would do certain things, just about. Diesel Two would do other things… a lot of the time we just had to imagine Diesel.

‘There was a scene where we were walking along this beautiful estuary and we had our hands full of treats so the dog would follow us. But he jumped into the water and started swimming.

‘One of the dog wranglers had to leap in after him, I think she’d taken her shoes off but other than that she was fully dressed, holding his lead, trying to catch him. When she got out on the other bank she had to walk a mile to a bridge to get back.

‘Since it was the last shot of the day, that was the end of that scene. I know I shouldn’t talk badly about my costars, but they were exceedingly uncooperative.’ And Brown? ‘Bryan was much easier to work with,’ she laughs.

The other non-human star of the show is the large motorhome Joan has hired to solve the overarching mystery that spans the whole series: why her husband has turned up dead in Australia when he was supposed to be on a quick trip to Barcelona.

Greta proved herself expert behind the wheel, a skill that dates from her early days as an actress.

‘I always used to do my own removals. We’d hire a truck. I’d drive. Now I can pay someone else, but in my youth you’d just grab a truck and fill it up, especially if you were a hoarder like me, with loads of antiques and junk and knick-knacks.’

She’s still a hoarder with lots of her life packed into boxes in the garage of her West Sussex home and an inability to walk past a bric-a-brac shop. Nonetheless, she’s a fan of so-called ‘silver nomads’ like Darby and Joan, living a stripped-down life on the road. 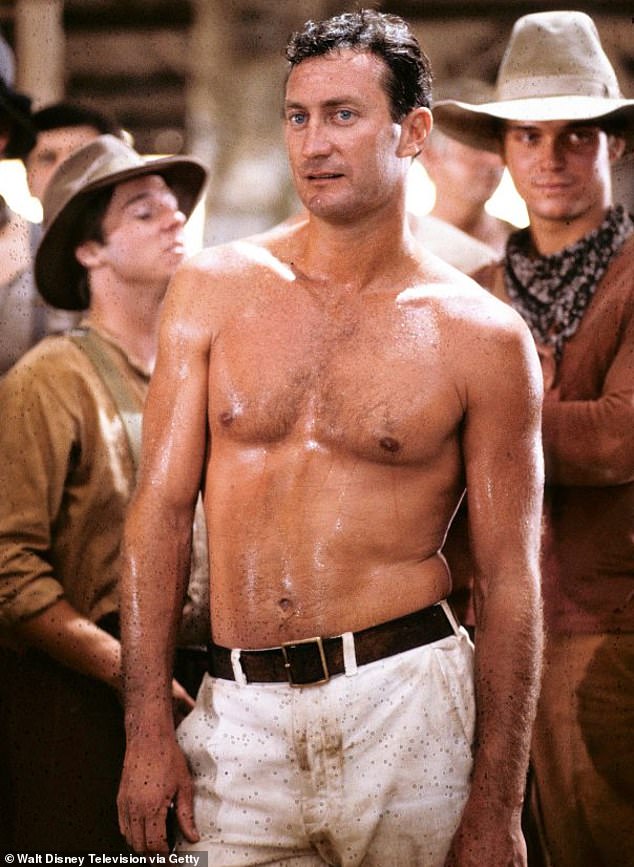 Bryan in The Thorn Birds. Greta and Bryan are friends, who got to know each other through his wife, the model and actress Rachel Ward, with whom he fell in love on the set of The Thorn Birds

‘It’s wonderful, so reassuring, to know that people who reach retirement still have that urge, that energy. It was always a fantasy of mine to pack a truck with everything I needed and travel across the Middle East and into Asia.’

She never did, but her long, successful acting career has taken her around the world with film and theatre jobs in Europe, America and Australia. And while she doesn’t have a motorhome, she does have a shepherd’s hut in an orchard close to her house where she has pared life to the minimum.

In her hut she reads and writes and listens to a lot of radio, never missing Desert Island Discs or Just A Minute on Radio 4. There’s a bed, a table and chairs and an open fire on which she’s learned to cook spaghetti and minestrone, stews and curries, and to make bread and desserts in a Dutch oven.

‘It’s like a gypsy caravan. I think I come from wandering folk. But my working life is so itinerant that I cherish time at home, when I get itchy feet it’s about heading home rather than heading away.’

The uncluttered weeks she spent in her hut during lockdown helped her frame the character of Joan, living out of her van. It helps that Greta is the same kind of age as Joan too, playing a part that ‘doesn’t need me doing cartwheels pretending to be younger, going to a surgeon’.

In fact Greta is delighted to be working at a time when showbusiness is increasing its representation of the 50-plus age group on screen. (You might call it The Best Exotic Marigold Hotel factor.)

‘It would be mad if they didn’t look at the population demographic and not see that market blooming. It’s been starved of attention and this has to shift, ethically and commercially.’

Yet she was once as guilty of ageism as the rest of the industry. ‘I remember when I was 25, I used to think anyone over 40 was a disgrace and wonder if people didn’t realise how offputting they were, still walking around in their 50s – and even older.

‘Then I turned 50 and discovered there’s actually something very liberating about realising you have more of your life behind you than ahead of you, it helps you see your priorities.’

Safe to say the young Greta would have been appalled by Joan, with her sensible linens and laughter lines, tucking into a lamington (the classic Australian chocolate and coconut cake) despite the damage it will do to her waistline, flirting with danger as well as with Darby.

Mid-life Greta meanwhile, thinks she’s ‘determined and honest and a good sport,’ the kind of woman who could deal with a puncture and sort out the loo on the motorhome.

‘Don’t ask me to tell you I love the way Joan looks but I’m quite happy being there, at that age, myself. It’s been a relief for the last 20 years not to have the pressure on me, to be the beautiful one. I can just be a character.’

She was one of the faces of the 80s though, nicknamed ‘Scorchy Scacchi’ for the red-hot nude scenes in films such as White Mischief, and Presumed Innocent, with Harrison Ford, which contrasted with her glacial beauty. Her complicated private life added to the fascination.

At the time, she was one half of a movie power couple with Italian-American actor Vincent D’Onofrio with whom she has a daughter, the actor Leila George, 30. Leila was briefly married to Oscar-winner Sean Penn, but they divorced earlier this year.

When Greta’s relationship ended she found happiness with her first cousin Carlo Mantegazza with whom she has a son, Matteo, now 23. Today she guards her privacy, saying she wishes she had never talked about her personal life.

The closest she comes to acknowledging it is when she says there is a pair of chairs in her hut ‘because there are two of us’. For Darby and Joan there might eventually be an ‘us’, but you’ll have to watch the whole series to find out.

There’s a great exchange in the second episode when Darby reprograms the sat-nav on Joan’s van to make a 200-mile detour while she’s snoozing.

‘Two hundred miles is nothing out here, just a couple of hours,’ he tells her when she wakes up, furious. ‘Back home, we’d be in another country by now,’ she replies.

And that’s what lies at the heart of the show: older age is another country, but whether you’re willing to take a scenic detour along the way is up to you.