In this column, we deliver hot (and cold) takes on pop culture, judging whether a subject is overrated or underrated. This week, Top Gun and its sequel.

For the first few minutes of Top Gun: Maverick, I swear I thought they’d put on the 1986 original by mistake.

There were the same orange-hued shots of the deck of an aircraft carrier, the same Harold Faltermeyer music on the soundtrack with its slow synth-driven start building to the insistent “ride into the danger zone” Kenny Loggins chorus. There were the same drooling shots of jet engines burning and ground crews turning. 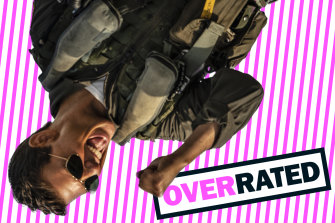 I honestly don’t think I have ever seen a movie with less imagination than Top Gun Maverick.

Apart from the presence of the word “Maverick”, the opening title card – introducing us to the elite flying school for the “top one per cent” of the US Navy’s pilots – is exactly the same. Even Don Simpson, co-producer with Jerry Bruckheimer of the original, gets a shout-out, despite having died 26 years ago.

Call it homage, call it tribute, call it fan service, but I’m calling it for what it is: a shocking dearth of imagination.

If the photocopier approach to storytelling ended there it might be excusable. But it doesn’t. It infuses almost every moment of a film that has got fans around the world salivating and squealing in delight, and has conned some critics into similarly worshipping at the altar of Xerox-driven commerce over creativity.

Copying a masterpiece is fraught with risk – just ask Gus Van Sant how well his frame-by-frame remake of Psycho turned out – but the original Top Gun is a long way from a masterpiece. It’s a schlocky popcorn movie peddling macho stereotypes and jingoistic warmongering, with thin characterisations, dud sexual chemistry between its male and female leads, a ludicrous plot and more chest-thumping than you’ll find outside a pack of silverbacks in the Congo.

Top Gun Maverick is more of the same. The enemy still flies Migs, and their nationality is still shrouded in mystery. Thankfully, even when they’re piloting far more technically advanced planes they’re no match for Mav and his mates. Good ol’ ’Mercan knowhow beats commie hardware every time.

In case we haven’t quite got the message that Rooster is just like the late Goose, we get a scene in which he sits at the piano in the bar where the old man banged out Jerry Lee Lewis’s Great Balls of Fire – and he does THE VERY SAME THING. And in case we haven’t clocked that Maverick is still cut up about Goose’s death, we get him staring wistfully from outside the bar as Rooster plays, intercut with flashbacks of Goose doing the same all those years ago. 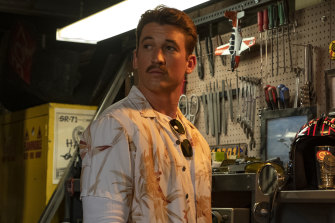 Miles Teller as Rooster, son of Goose – and inheritor of his fashion sense.Credit:Paramount

Seriously, the credits should read “Written by ctrl+C and ctrl+V”. Not that the fans will mind one little bit.

I left the cinema after a preview screening in which every nod to the earlier film was greeted with whoops of delight from an adoring audience. If this is what fan-service cinema looks like, it ain’t pretty, but it works.

Want to capture the magic of Tom Cruise with his shirt off playing volleyball on the beach (of all the ludicrous moments in the first movie, the idea that one of Hollywood’s more diminutive leading men might be a dab hand at spiking is right up there); how about a beach gridiron game in which not only Tom (who was 54 when production on the sequel began) gets his shirt off, but so too do a bunch of younger, even buffer men?

Want to tap into the good vibes of the old rivalry with Iceman? Let’s wheel out Val Kilmer for a cameo, even though throat cancer has robbed the actor of his voice.

And yet … For all its many, many failings, Top Gun Maverick has some of the most exhilarating action sequences I have ever seen. Cruise’s insistence on a cinematic release for his much-delayed movie was spot-on: the flying scenes are incredible. Despite every hokey set-up and plot point, the last 40 minutes of the movie are genuinely breathtaking.

As I watched the movie, I could think of nothing but how much it had plundered the first film for all its emotional and narrative touchpoints. But as I left the cinema at the end, another question took its place: How can something so terrible also be so great?

There’s little doubt Top Gun Maverick will be enormously successful. It delivers on the action sequences – with the cast actually strapped into jet planes for the high-speed flying scenes, their faces distorted by G-forces, their vanity splattered against the cockpit roof – more than just about any movie I have ever seen.

For that, and that alone, Top Gun Maverick is worth seeing. The fans are welcome to their jollies, but just like the original, it’s no masterpiece. Even when you’re dealing with fighter pilots, cut-and-paste does not an ace movie make.