The Victorian government has for years failed to meet its own targets on maintaining the state’s piers and jetties, prompting concerns the historic structures are being neglected and left to deteriorate.

Communities are now banding together to save suburban jetties, as they sound the alarm on the fate of the wooden structures used to deliver goods before the construction of reliable roads. 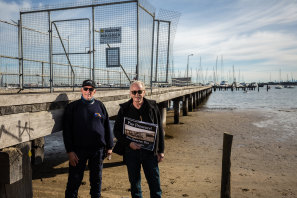 John Barton (left) and Graham White from the Hampton Swing Mooring Association are pleading with the government to repair Hampton pier. Credit:Scott McNaughton

Community groups, swimmers, fishers and boaters are increasing pressure on the state government to invest adequately in protecting piers by creating a dedicated permanent funding stream to repair damaged structures, rather than letting them deteriorate until they need to be demolished.

The Age last week revealed Parks Victoria knew for four years that the historic Flinders pier, off the Mornington Peninsula, needed urgent repairs but failed to act and instead left the pier to worsen until last year, when it announced its demolition.

Another structure fenced off for the past 13 months because Parks Victoria deemed it unsafe is Hampton pier on Melbourne’s bayside. The government has assured locals the pier will not be demolished, but it is yet to provide details of how and when it will be repaired.

Sandringham resident and Hampton Swing Mooring Association secretary John Barton has described the pier as a gem with a history dating back more than 100 years.

“It used to be the centre for the Melbourne fishing fleet, so the fishermen used to come up to the bay and unload their fish at the pier, which were then trucked to a railway link, which is still there,” he said.

“All of the houses around Beach Road in Sandringham were old fishermen’s cottages … so there’s a strong appreciation of that history.

“Once [a pier] loses that commercial power it seems to just be seen as a piece of infrastructure around the bay. But these things take on a new life in terms of their social value – it’s a place to walk along and appreciate the sea. The pier is the jewel in the crown, it’s the focal point for everyone.”

For the past three years, Parks Victoria has been unable to meet its key targets to maintain jetties, piers and other bay assets in average to excellent conditions, according to an analysis of state budget papers. 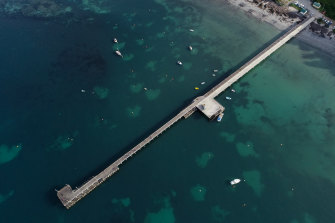 Mornington Peninsula locals are fighting to save the Flinders pier. Credit:Jason South

The agency has attributed this to “age and storm impacts”. It also said many of the piers it managed were rebuilt in the 1970s and were now at the “end of their life”.

FutureFish Foundation director David Kramer, who also works with the state government on its fishing policies, said if Parks Victoria had adequately maintained the piers and jetties over the years, including by replacing ageing piles and planks in a timely fashion, the structures would not deteriorate to a point of no return.

“Parks Victoria is calling it end of life – too bad, so sad,” Mr Kramer said. “I am really concerned because every day that goes by and there’s no maintenance, a lot of piers will just disappear.

The Victorian government said it expected more than 30 million visits to piers and jetties this financial year – or as many as 35 million were it not for COVID-19 rules restricting people’s movements – according to the most recent budget paper.

In a speech to Parliament in May, he said if the government failed to provide appropriate information to the community, it should “get ready for a whole new wave of pier pressure. This is indeed the calm before the storm.”

Mr Rowswell told The Age: “What’s really disappointing is that the Andrews Labor government has no plan to fix the plethora of piers and jetties that have fallen into disrepair on their watch.

“Their only answer is to lock people out with temporary fencing rather than getting on with the job of fixing them. Labor need to get off their backsides and tell Victorians how they plan to fix these important community assets. If they don’t, they have failed.”

A government spokesman did not respond to detailed questions about plans for Hampton pier but said Parks Victoria was undertaking a broader planning piece for Sandringham Harbour with the City of Bayside.

“We’re investing significantly in upgrading a number of piers and jetties, in addition to our annual maintenance program, through the Building Works economic stimulus initiative, including for Portarlington, Queenscliff South, Altona, Middle Brighton, Tooradin and Rye piers, as well as a $50 million redevelopment of St Kilda pier,” a government spokeswoman added.

“This year’s budget also delivered $2.5 million to establish and map the strategic priorities for future investment. We will continue supporting port managers in prioritising the repair and renewal of local ports to deliver a safe and sustainable network for all Victorian’s to enjoy.”

There is no publicly available list of piers or jetties that are in disrepair or have been closed for maintenance, but Mr Kramer has identified the Black Rock, Hampton, Mornington, Queenscliff, Flinders and Williamstown piers, as well as two piers in Warneet, as closed. And he predicts the Portsea pier, which is being battered by ferocious waves, will be next.

“They’re just sitting there neglected, fenced off – there’s no plan and no funding to fix them,” he said. “It’s almost part of the Victorian culture now to go for a walk on a pier – it’s a pretty unique experience. We have a pristine bay. Port Phillip Bay has never been better – commercial netting has ceased, scallop dredging has ceased. Port Phillip is in the best condition it has been in our generation – why can’t Victorians be allowed to go on a pier and see that?”