It was Princess Anne’s turn to award the latest honours at an investiture ceremony at St James’s Palace this afternoon.

The royal, 70, looked in good spirits as she crossed the sword over today’s set of award winners including playwright Sir Christopher Hampton, diversity campaigner June Sarpong and actor and musician Giles Terera.

The ceremony may have been scaled back because of restrictions due to the pandemic but there was still plenty of regal splendour, with Princess Anne wearing her full military uniform. 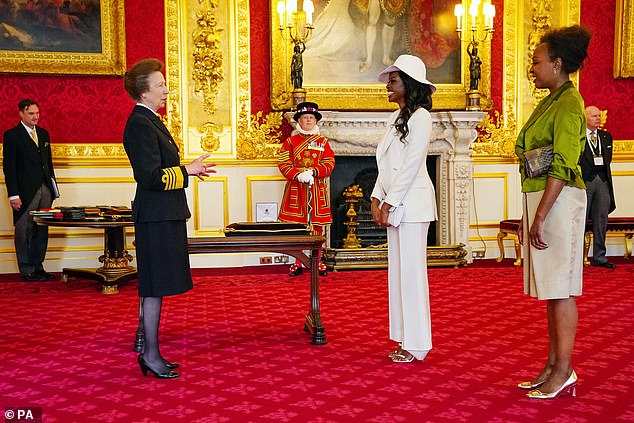 Former television star and current BBC director of creative diversity, June Sarpong, was honoured by Princess Anne at St James’s Palace this afternoon with an OBE 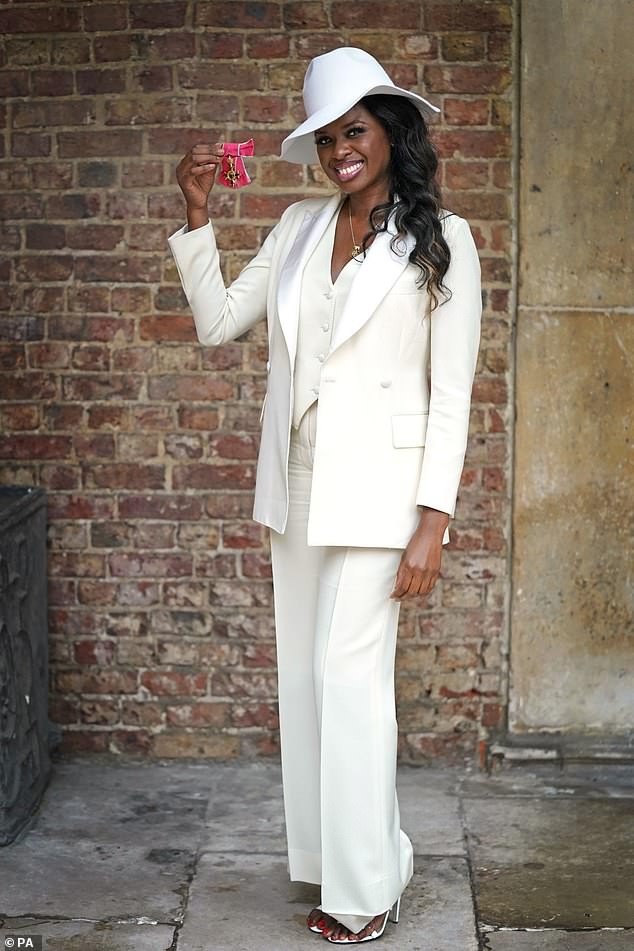 Wearing a sharp white suit, thought to be from couture brand The Deck London, and a matching fedora, the 44-year-old campaigner said the BBC can learn lessons from England’s successful multicultural football squad

The BBC’s director of creative diversity, June Sarpong, has been made an OBE for services to broadcasting.

Wearing a sharp white suit, thought to be from couture brand The Deck London, and a matching fedora, the 44-year-old campaigner and former television presenter said the BBC can learn lessons from England’s successful multicultural football squad.

After collecting her honour from the Princess Royal at a scaled-down ceremony at St James’s Palace she said: ‘I think the lessons that not just the BBC but industries across the board can learn from football is their approach to nurturing talent from a young age from low-income communities.

‘If there is a young, talented footballer from a poor community, they will know about them and they will be able to go and develop them and support them.

‘I think that is what we need to do better – not expecting people from low-income backgrounds to come to us, but for us to go to them.’

Sarpong described the England squad, who are multi-racial and socially conscious, as ‘young men who just are examples for the next generation – they are stand-up guys’. 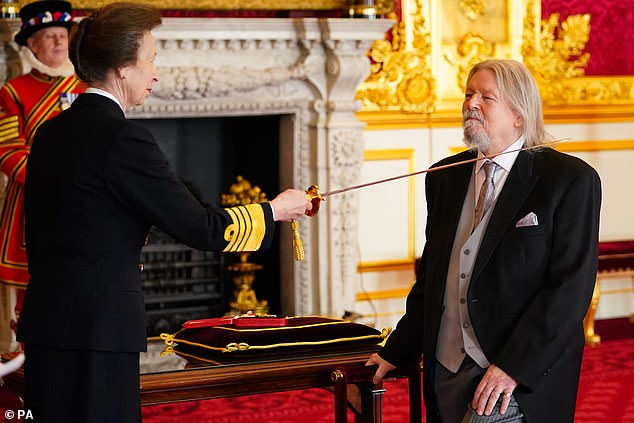 Sir Christopher Hampton, 75, described collecting his knighthood from the Princess Royal as ‘great’ and ‘lovely’ after the scaled-down ceremony 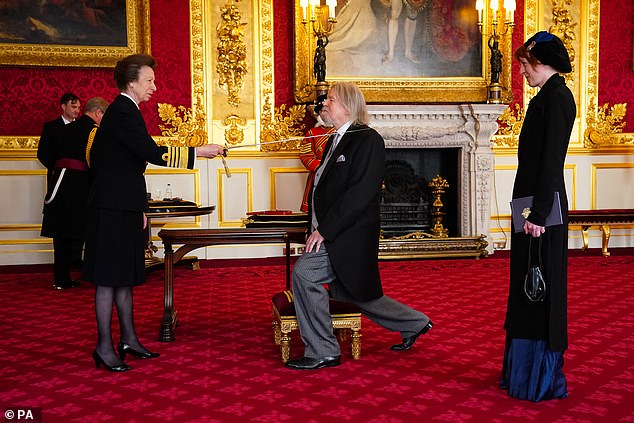 The playwright, who won an Oscar for his film The Father, kneels as his daughter watches on 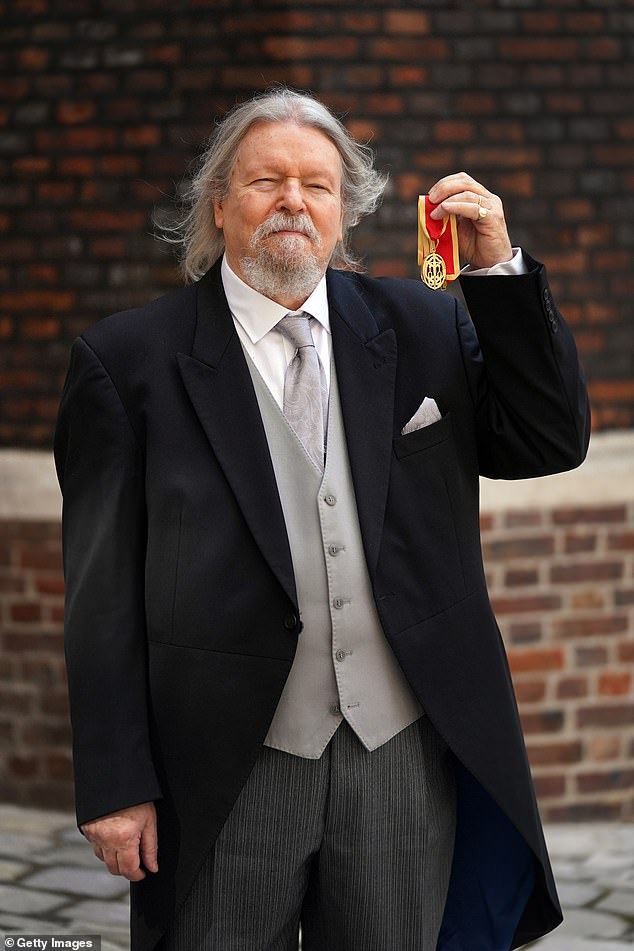 A year of honours: Hampton revealed that his Oscar statuette had arrived a couple of weeks after the ‘weird’ Academy Awards ceremony

Sarpong began her career on radio, before becoming a presenter for MTV, moving on to ITV’s Loose Women, and then taking a seat on Sky News debate show The Pledge.

She said she feels her OBE is also an award for her family, who come from Ghana.

‘It has been a wonderful day,’ she said. ‘It is a day that is also about my parents and where you have come from. My parents are immigrants who came to the UK to try and make a better life for themselves.

‘I think that, when you look at all (the things) that immigrant generations have had to go through, it really does mean something. I am thrilled.’

Playwright and film director Sir Christopher Hampton also expressed his delighted at receiving his knighthood after Covid-19 delayed him from picking up the honour. 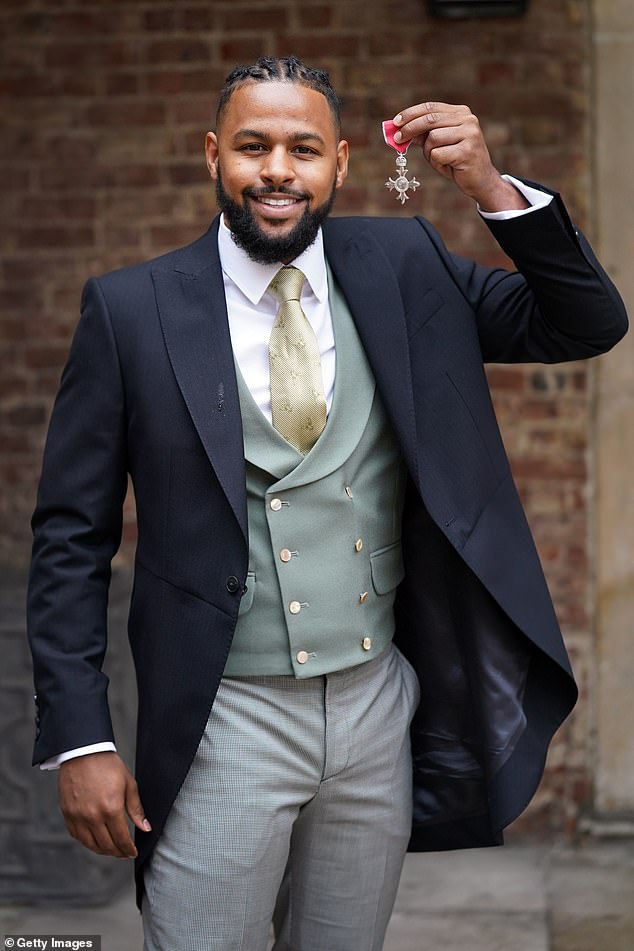 Trevor Elliott was also honoured after being made an MBE for services to vulnerable children, particularly during Covid-19 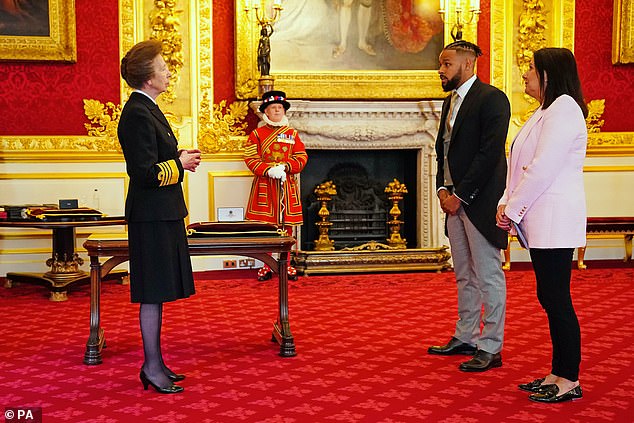 Mr Elliott and the Princess Royal chatted about his work during the pandemic, as a beefeater looked on

The screenwriter and translator collected the knighthood he was awarded in the 2020 New Year’s Honours list for services to drama on Thursday.

It had also taken a couple of weeks to receive his Oscar for best adapted screenplay for The Father in April.

Sir Christopher, 75, described collecting his knighthood, with his daughter Mary nearby, from the Princess Royal as ‘great’ and ‘lovely’ after the scaled-down ceremony. 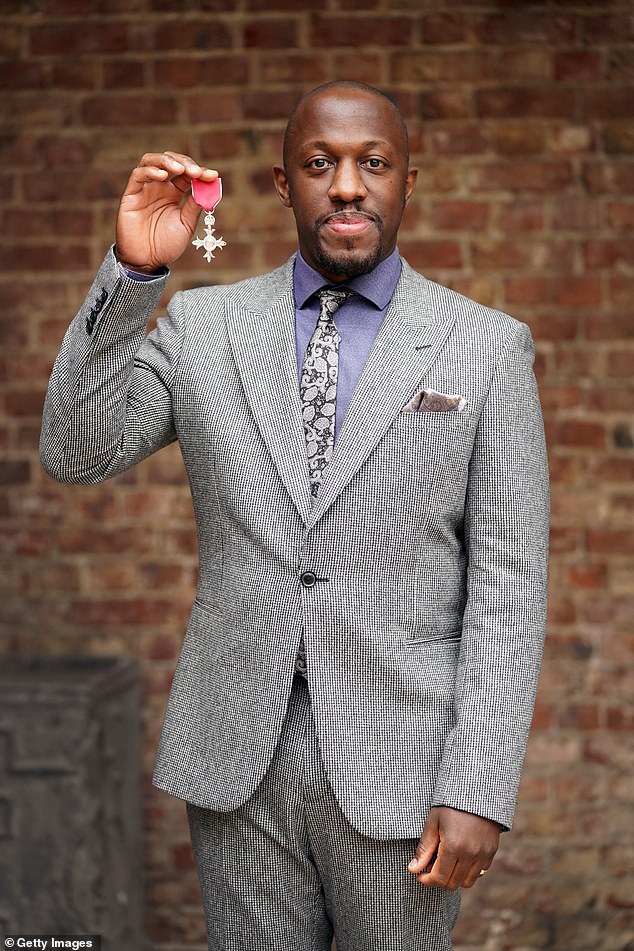 He co-wrote The Father with the film’s French director Florian Zeller. He joked that his Oscar statuette arrived a couple of weeks after the ‘weird’ Academy Awards ceremony.

He said lockdown had taken a little while to get used to, but he is ‘certainly now as busy as ever’.

Sir Christopher said: ‘At the very beginning (of lockdown) it was quite bewildering and then I suddenly realised that this is what writers are always asking for – quiet and time – so I actually got quite a lot of work done.’

He added: ‘It has been lovely and generally speaking all of this easing up is just great but I am slightly concerned that they are doing it too quickly. We shall see.’