Home » Lifestyle » Kenan Thompson gets an NBC sitcom, but will stay on ‘SNL,’ too

Kenan Thompson, the longest-running cast member on NBC’s “Saturday Night Live,” is making the leap to prime time. But he’ll stick around for his night job.

“The Kenan Show,” due next season, is a family comedy that stars Thompson as Kenan, who “strives to be a super dad to his two adorable girls, while simultaneously balancing his job and a father-in-law who ‘helps’ in the most inappropriate ways,” NBC says in describing the new project.  Chris Rock directed the pilot and will be an executive producer of the series.

Despite his move to prime time, Thompson will remain on “SNL,” which formerly called its cast members “Not Ready for Prime-Time Players,” said an NBC executive who was not authorized to speak publicly about the plans. Thompson himself told Vanity Fair in February: “You know I’m all about getting it all. I want every single check.” 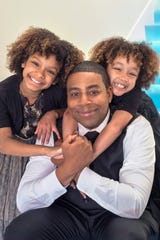 Thompson gained fame on Nickelodeon’s “Kenan and Kel” sketch series. He joined “SNL” in 2003 and at 16 seasons and counting is the most-tenured cast member. He’s well known for impressions of Charles Barkley and Steve Harvey (in countless game-show parodies).