The royal Pipe Major made a historic first this week when he played for the King in Clarence House’s gardens for the first time of his reign.

Major Paul Burns, who performed the emotional last lament at Queen Elizabeth’s funeral on September 19, played for King Charles at his London residence yesterday whilst the Monarch stayed there.

A video shared by the Royal Family’s Twitter account showed the bagpiper rounding His Majesty’s beautiful gardens. It is thought to be the first time the bagpipe player has performed at Clarence House, due to the fact the King has no immediate plan to move to Buckingham Palace.

Warrant Officer Class 1 (Pipe Major) Burns is the 17th Piper to the Sovereign, a role established in 1843.

The position of Pipe Major was created by Queen Victoria in 1843, and Queen Elizabeth enjoyed the special tradition following her Accession to the Throne in 1952.

Major Paul Burns, who performed the emotional last lament at Queen Elizabeth’s funeral on September 19, played for King Charles at his London residence yesterday whilst the Monarch stayed there 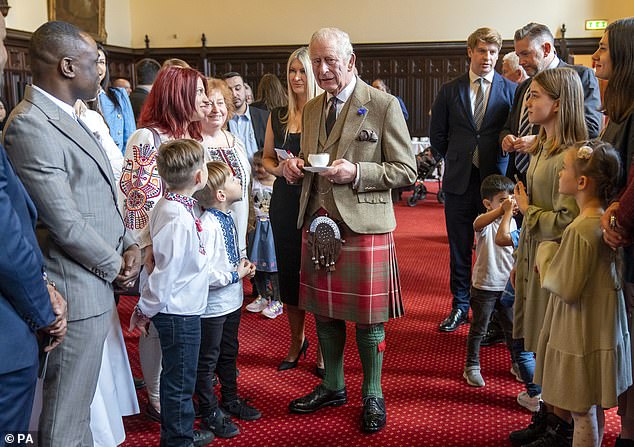 The Queen was woken up by her Pipe Major every weekday of her reign, and King Charles, pictured in Aberdeen on October 17, has continue the tradition

In the video, Major Paul Burns could be seen playing the bagpipes with aplomb as the clock struck 9am at Clarence House.

It is thought to be the first time the Pipe Major has played in Clarence House, on account of the fact the King has no immediate plans to move to Buckingham Palace, which has been the Sovereign’s main residence since 1837.

Dressed in his traditional kilt, Burns walked around the gardens with military precision, welcoming the Monarch to a new day.

His cheerful hymn echoed around the King’s immaculately manicured gardens while the monarch started his day. 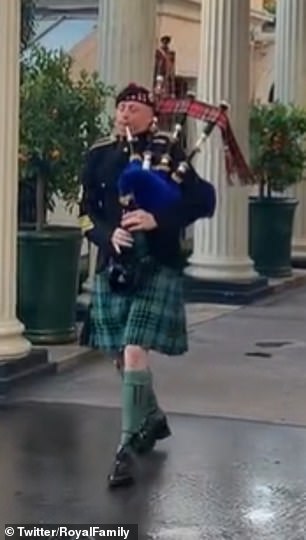 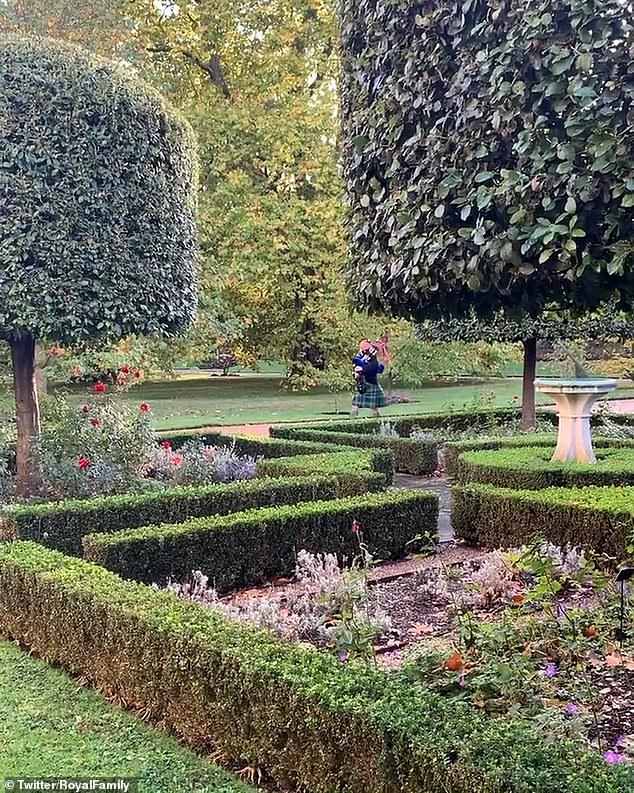 With military precision, Major Burns walked around the gardens while playing the tune for the Monarch

The player began the tune at 9am. The song usually lasts for 15 minutes before the bagpipes stops playing

Burns played a central role during the Queen’s funeral when he played a haunting lament as her coffin gently descended into the Royal Vault at St George’s Chapel in Windsor Castle.

Millions watched as Burns walked away from the gothic chapel after the late Monarch was laid to rest, leaving the 800-strong congregation of mourners in the Chapel in contemplative silence.

The moment marked a powerful and symbolic conclusion to Queen Elizabeth’s Committal Service, where  friends, family and those who worked in the Queen’s Household, both past and present, were able to bid farewell to the Monarch.

Major Burns became the Piper to the Sovereign in 2021, taking over from Pipe Major Richard Grisdale. Burns serves with The Royal Regiment of Scotland.

The Queen was woken by 15 minutes of live bagpipe music beneath her window each morning at 9am, when she was staying at Balmoral, Windsor Castle, Buckingham Palace or Holyroodhouse.

Members of the Royal Household can practically set their watches by the pipes, which start at precisely 9am and last for exactly 15 minutes.

Now King Charles has continued the tradition on, and will be waking up to these bagpipes musings. 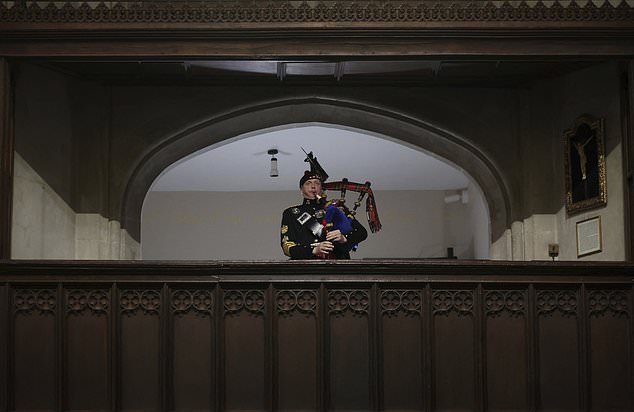 A piper plays during the funeral of Britain’s Queen Elizabeth II, in London, Monday Sept. 19, 2022. (Phil Noble/Pool Photo via AP)

Bagpipes, which are thought to have originated in originate ancient Egypt, have become synonymous with Scotland and instruments of war since the 1700s as they were used in the Battle of Culloden and the defeat of Bonnie Prince Charlie, who attempted to supplant King George II, an ancestor of Queen Elizabeth II.

But after a ban, following the rebellion, bagpipes became a symbol of the British Empire – and are now used in places such as Oman, Canada, the US and India – and part of ceremonial events including Armistice Day, according to Historic UK.

The history of the Monarch’s personal bagpiper dates back to Queen Victoria’s reign. She first heard bagpipe music in 1842, when she and Prince Albert visited the Highlands for the first time.

And in 1843, Angus MacKay became the first personal Piper to the Sovereign.

Pipers are personally interviewed by the Monarch before they make their appointment, and their decision is based much on whether they feel their personalities are compatible – as they will be interacting on a regular basis.

Queen Victoria was so close to William Ross, who served as her piper for 37 years, that she grieved long after his death.

At 9 o’clock every morning whenever The Queen – and now the King – was in residence, the piper strikes up for 15 minutes outside Her Majesty’s apartments including those at Buckingham Palace, Windsor, the Palace of Holyroodhouse and Balmoral Castle.

Of the 17 pipers, 13 have been during Queen Elizabeth’s reign, including Alexander MacDonald, who served from 1945 to 1966, and his successor Andrew Pitkeathly, who served until 1973.

In 1965 it was decided that the post would be given to a serving soldier and experienced army Pipe Major – and removed from the Civil List. The piper would retain his army status and pay although become a member of the Royal Household on secondment.

The Piper is also responsible for the co-ordination of the twelve army pipers who play around the table after state banquets and are often played at Royal events due to the association with the military.

The Pipe Major also acts as an Honorary Page of the Presence at events such as audiences, garden parties, investitures, state functions and receptions. It is his job to escort The Queen and now the King to the various audiences that she has throughout the day.