Walking to collect Chloe at the arranged meeting point, I noticed immediately she wasn’t smiling.

We were two days into our mother-daughter holiday to Greece — travelling with a friend and her daughter — and so far it was going brilliantly.

But now, for the first time since we arrived, Chloe looked ‘down’. I hugged her and asked what was up.

‘Some of the children said I look like a boy, Mummy, they were laughing at my clothes,’ she said eyes downcast.

I studied my gorgeous child — my blonde haired, green-eyed waif —dressed in her chosen beach uniform of blue-and-white shorts, emblazoned with sharks, a blue ‘rash vest’, a multi-coloured hoodie and sun hat. 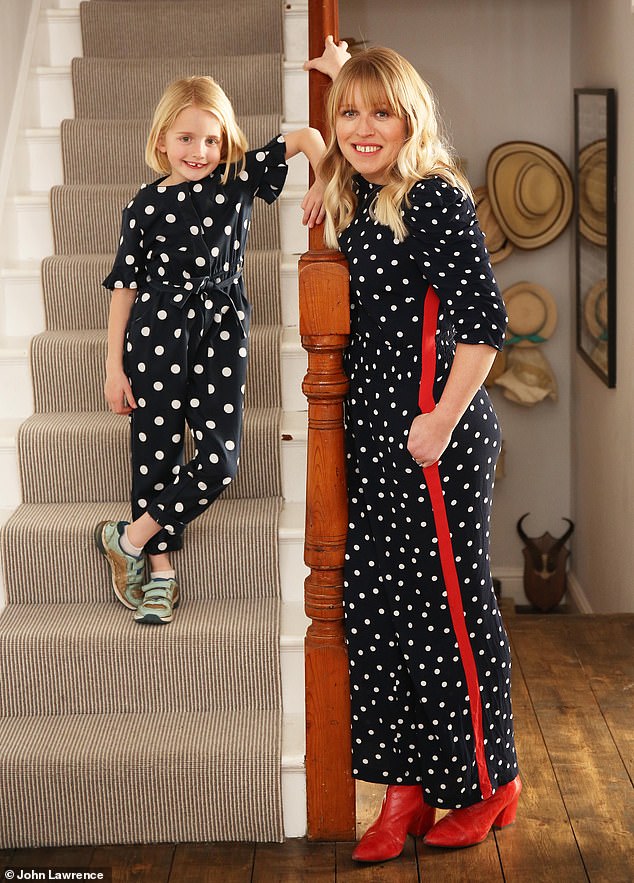 ‘What did you say back,’ I asked gently, fighting the urge to punch any child who’d been mean to her.

‘I said they’re silly, I look like a surfer, and some of the best surfers in the world are girls.’

And with that she shook it off. I said a silent prayer of thanks that my feisty daughter possesses more inner confidence than I’ve ever had, and thank goodness for the surfing lessons in Cornwall last summer.

My daughter has short hair, hates dresses and the colour pink. She loves football, but refused to play at school because the other children told her that, as a girl, she shouldn’t.

So she’s joined the new, girls’ only team at our local youth football club, proudly wearing the blue-and-white kit, and looking forward to the training sessions. She also goes to ballet lessons and gymnastics.

Chloe loves art and is a big Harry Potter fan. She plays Ghost Busters in the playground and wants to be a spy when she grows up. She’s planning a camping party for her seventh birthday. In short, she’s well-rounded.

But many see her, to use the slightly old-fashioned phrase, as a tomboy. And it’s true she is happiest when doing activities that people normally consider ‘for boys’.

It’s not that she wants to be a boy — she doesn’t give her sex or gender a second thought — she just wants to be herself in all her scrappy, brave, grubby, six-year-old glory.

I was like her growing up. My best friend was the boy next door and we were inseparable — spending the summer holidays squeezing through the gap in the hedge into one another’s gardens to play until we were called in for tea.

I could climb and swim better than he could while he learnt to ride a bike first and was the faster runner. Born just nine days apart and both equally blonde and skinny, we could have been twins and the fact that he was a boy and I was a girl was never an issue.

But attitudes were different in the Eighties; it was a much freer time for girls and boys. Why? We could just be — without today’s obsession with gender.

Now even traditional favourites are being reassessed in the light of our new favourite topic.

This week, it’s Enid Blyton’s Malory Towers series, with its wonderful tomboy character Bill (short for Wilhelmina, but call her that at your peril). Emma Rice, the theatre director, is adapting the books for the stage and has cast a non-binary actor in the role, saying that Bill may have been transgender or gay.

‘Bill is portrayed as a tomboy in the books but, thanks to the progress we have made as a society, people like Bill are now able to express their identity in other ways,’ she said. That would indeed be a great step forward if Bill was transgender or gay, but what if Bill is just a tomboy?

Recently I noticed a book on Amazon with the title Jack (Not Jackie) — which, according to the blurb, is a ‘heart-warming picture book … A big sister realises that her little sister, Jackie, doesn’t like dresses or fairies — she likes ties and bugs! Will she and her family be able to accept that Jackie identifies more as Jack?’ 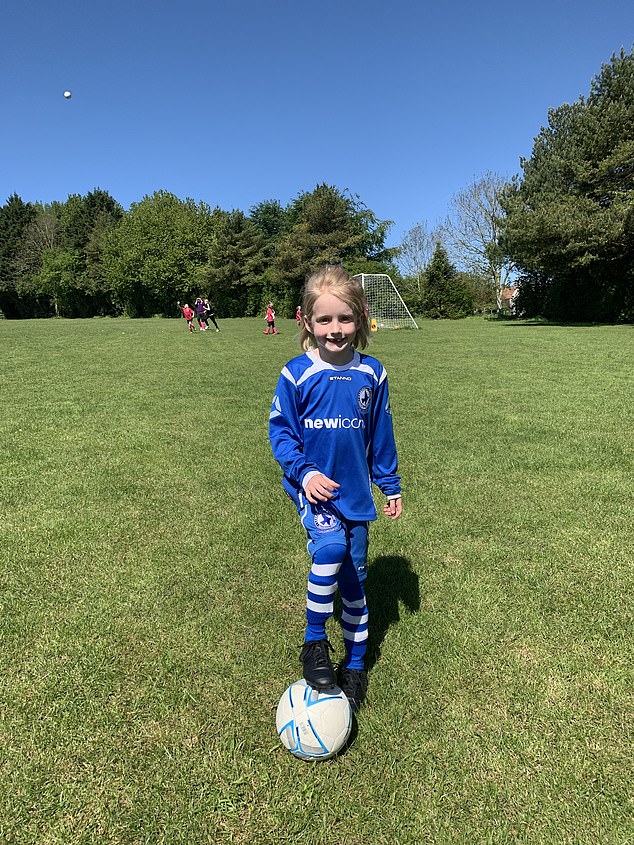 Chloe has joined the new, girls’ only team at her local youth football club, proudly wearing the blue-and-white kit

Various groups have hailed this as ground-breaking. I think it’s the opposite — blatantly equating being female with (misogynist) stereotypes of gender. Aimed at children my daughter’s age, it promotes the idea that if you don’t conform to the ‘girl’ stereotypes you must have been born the wrong gender.

‘But as Jackie grows, she doesn’t want to play those games. She wants to play with mud and be a superbug! Jackie also doesn’t like dresses or her long hair, and she would rather be called Jack,’ says the author. Far from supporting the transgender community, this is trivialising what individuals with gender dysmorphia go through. What’s more, it is telling girls they can’t be a female if they don’t conform. In my view this is reactionary — and damaging.

Over the past five years, the number of children referred to London’s Tavistock Centre, an NHS clinic that treats transgender youngsters, has risen from 468 to 2,519 a year.

This is a rise of more than 400 per cent, with the proportion of girls rising faster than boys. I can’t be alone in finding this concerning.

Here I must underline that gender dysmorphia is a real, medically recognised, condition — and I have nothing but sympathy and respect for the young adults who, with the right guidance and support, decide to transition to the gender they know inherently should have been theirs at birth.

But when even a former governor of England’s only NHS youth gender clinic is saying that they are too quick to give children and young people gender reassignment treatment, we need to start asking why and why so many young people, and their parents, are seeking it.

Psychoanalyst Dr Marcus Evans, who resigned in February, told the BBC’s Today programme that he had been concerned about clinicians searching for ‘quick solutions’.

He said: ‘Adolescence and childhood is a time when people are developing socially and biologically — a time when young people are identifying with different groups, and with male and female aspects of themselves.’ Hear, hear.

Recently Phoebe Waller-Bridge, 33, the award-winning writer and actress revealed that she was such a tomboy as a six-year-old that she cut her hair, began wearing boys’ clothes and demanded that her parents call her ‘Alex’.

Asked if that meant she would be considered trans today, she said: ‘I mean there’s the tomboy kind of thing… I was fervent about it when I was younger.

‘I just desperately wanted to be a boy more than anything else. If it had been taken seriously by my school or those options had been given to me, I probably would’ve jumped at it.’

She explained: ‘I wasn’t thinking about either being a boy or being a girl. But then I discovered (being attracted to) boys in a big way… That was the kind of crossover point.’

For Waller-Bridge it was a phase — and one she was given a chance to grow out of. Now our children are told daily — through advertising — that certain things are for girls and others for boys. Even Lego has been split into ‘pink’ and ‘blue’, with the Lego Friends range with its shopping malls and stables aimed at the girls and the more interesting stuff for the boys.

I want my son to be able to be himself, too. Max, who is three, loves dinosaurs and tractors. Three of his four best friends are girls. He likes swishy Princess dresses and he loves copying his big sister — borrowing her outgrown leotard and attempting ballet moves in our hall.

The grass-roots campaigns Let Toys Be Toys and Let Clothes Be Clothes, are demanding that the toy, publishing and clothing industries stop limiting children’s interests by promoting these items as only suitable for girls, and those only for boys.

If either of my children turned out to be transsexual, I would support them whole-heartedly.

But now, while they are children, I’m desperate for them to be themselves in all their wonderful innocence — going through ‘tomboy’ and ‘girly’ phases as they wish. As a friend put it ‘just let people be people — no matter if they are little or grown up’.