The Bureau of Meteorology is expected to declare a La Nina event is under way in the Pacific, underscoring climate influences that point to a wetter than usual end to 2020 across northern and eastern Australia.

The bureau will update its climate drivers statement on Tuesday, with forecasters expecting it will match international agencies such as the US National Oceanic and Atmospheric Administration in declaring that a La Nina is under way. NOAA, which uses a slightly lower threshold, called such an event earlier this month. 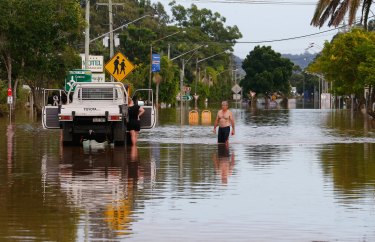 Flooding in Lismore, NSW, in April 2017: a wetter-than-average spell is expected in coming months as climate drivers including a La Nina tip the odds towards rain.Credit:Jason O’Brien

Meteorologists and climate scientists monitor sea-surface temperature changes in the equatorial Pacific closely because they are major drivers of global weather.

In its most recent forecast, the bureau noted that all major international climate models were predicting La Nina thresholds would be met in October, with the event likely to last into early 2021.

A bureau spokesman declined to confirm it will declare a La Nina on Tuesday but other specialists are confident such an event is highly likely.

"It's quite a distinct La Nina pattern [in the Pacific]," Ben Domensino, a senior forecaster at Weatherzone, said. "It's quite likely that the bureau will follow suit [and match NOAA's declaration]."

Agus Santoso, a climate scientist at CSIRO and the University of NSW studying La Ninas and their opposite, El Ninos, said a La Nina would most likely take hold for the rest of the year and into next although it remains unclear how strong the event will be.

Also unlike this time last year, conditions in the Indian Ocean off north-western Australia are favouring above-average moisture flows across the continent. 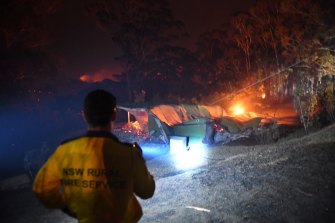 Less of this in 2020-21: La Ninas mean conditions are likely to be wetter than usual for most of eastern Australia, easing the threat of major bushfires.Credit:Nick Moir

The so-called Indian Ocean Dipole, which tracks the relative warmth of sea-surface temperatures between the western and eastern Indian Ocean, is close to its negative phase. During such phases, the eastern two-thirds of Australia typically receive above-average rain during spring.

The climate influences from the Indian and Pacific oceans contributed to the recent heavy rains across inland Australia, with more to come, Mr Domensino said.

"It's very unlikely we'll see anything like last year's bushfires," he said.

Still, fires will still be a threat in places, particularly where there is strong grass growth that dries off during warm spells.

Not all places will record higher than usual rainfall either, Mr Domensino said.

Sydney, for instance, has had only about a third of its usual September rainfall, although it only takes one big burst to shift the totals.

Even with 2020 likely to end with a La Nina event it will still come close to being the hottest year on record, he said.