Coal miners will have to pay to reduce their carbon emissions from next year under a Labor vow to overhaul the government mechanism that regulates 215 big emitters, setting off a political dispute over the cost of achieving net zero emissions by 2050.

Labor climate spokesman Chris Bowen confirmed the impact on coal on Sunday in a key statement about the scope of the policy while saying the changes would be done gradually using a mechanism and targets backed by the Business Council of Australia. 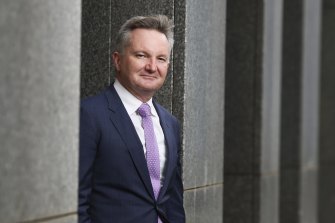 But Deputy Prime Minister Barnaby Joyce went on the attack by claiming the resources industry would be punished if Labor won the election and tightened the benchmarks in the government’s “safeguards mechanism” to require greater cuts to emissions.

While the claims set the scene for another dispute over the cost of acting on climate change, Grattan Institute energy program director Tony Wood said the idea of setting new baselines in the safeguard mechanism was an effective way to proceed using a structure already in place.

“I think the overall story would not be unreasonable,” Wood said.

Minerals Council of Australia chief Tania Constable said the industry expected to be consulted on the changes to the safeguard mechanism.

“The Australian mining industry has committed to an ambition of net zero emissions by 2050,” she said.

With coal exports forecast to reach $110 billion this year, the policy would see a Labor government ask 62 coal mines to reduce domestic emissions currently estimated to be about 33 million tonnes a year across the mines.

Labor treasury spokesman Jim Chalmers nominated a potential cost of $24 per tonne for the cuts required.

Bowen said the 215 emitters covered by the Labor policy across all sectors would be the same companies already covered by the government’s safeguard mechanism with changes decided by the existing authority, the Clean Energy Regulator.

“We will implement it better. They put this in place to reduce emissions and it just hasn’t worked because they just haven’t implemented it well,” he told the Nine Network on Sunday.

“So, yes, we will require the 215 emitters to reduce their emissions to net zero by 2050. And that is what the Business Council has asked to happen.”

Asked if coal mines would have to pay, Bowen said: “Yes, and the Clean Energy Regulator will work with each facility, each of the 215 facilities”. He said this would involve asking them about the competitors they face around the world and the technologies available to them on reducing emissions.

The list of 215 covers those emitting more than 100,000 tonnes of carbon each year and includes 62 coal mines as well as other industry sectors such as liquefied natural gas, large factories and producers of cement and fertilisers.

The rules would only cover the emissions from the production of the coal because 86 per cent of Australian coal is exported and the destination countries – such as Japan, South Korea and China – are responsible for the emissions from using that coal to produce energy or steel.

Labor leader Anthony Albanese has said several times he would not stop or slow coal exports because this would be subject to global demand.

Wood said coal miners produced 33 million tonnes of carbon each year, a relatively small amount of more than 500 million tonnes of Australian emissions, and 9 million of this came from fuel combustion (which could be replaced by electricity) and 25 from fugitive emissions such as methane.

In a tweet issued on Sunday to clarify the policy, Labor assistant climate spokesman Pat Conroy said the 215 emitters in the safeguard mechanism would not have any “greater constraint” than their competitors overseas.

“They will be supported by a government that invests in the opportunities of net zero – not hangs them out to dry as global markets change,” he said.

The clarification came after Conroy suggested last week that coal mines would not be covered by the safeguard mechanism. The Labor policy, released last December, made it clear that fugitive emissions were covered.

While it would cost the coal industry a theoretical $792 million each year to offset all 33 million tonnes of emissions at a price of $24 per tonne, the Labor policy sets out a gradual path to changing the baseline to achieve the goal of net zero emissions by 2050.

The modelling for the Labor policy, conducted by economics firm RepuTex, set out a reduction of 5 million tonnes each year across all 215 big emitters, highlighting the gradual tightening of the baseline in the mechanism.

Wood said the message from Conroy showed there would be flexibility for coal miners in how they met obligations set by the Clean Energy Regulator.

“For example, they could still have an obligation to reduce emissions in line with net zero but could be financially supported in some other way,” he said.

Wood said the result could lead to the purchase of international offsets for the emissions, although there are questions over whether some offsets achieve the carbon reductions claimed for them, and might lead to trading between companies.

“As soon as you start setting some baselines, there are always going to be some who are above and some who are below,” Wood said.

“For some it will be hard, for some easier, and that’s why trading will become important. The cheapest way to do this would be to get the lowest possible cost. In that world it would make sense for some companies to pay others to do it.”

Joyce backed the expansion of the coal industry on Sunday and said he believed those who wanted to build a coal-fired power station should be able to apply for federal assistance from the Northern Australian Infrastructure Facility, which had its funds increased from $5 billion to $7 billion this year.