Ryan Coogler’s Black Panther movies may or may not be the best of the Marvel blockbusters, but they’re among the most politically interesting. There’s something provocative in the whole conception of Wakanda, the Shangri-La of southern Africa, the most powerful nation on earth but also a fairy-tale kingdom with a culture that has lasted for millennia. 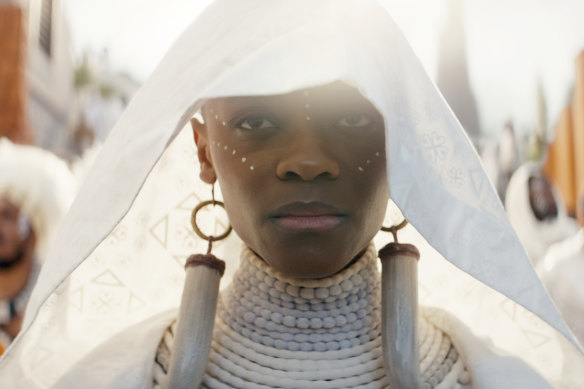 Prior to the events of the first Black Panther in 2018, its secrets were unknown to the wider world. But now Wakanda has assumed its rightful position as a global superpower: the proud Queen Ramonda (Angela Bassett) stares down delegates at the UN, insisting on the right to a monopoly on the quasi-magical metal vibranium.

Underlying her fierceness is grief, not hers alone. Black Panther: Wakanda Forever is far from the sequel anyone would originally have wanted: Chadwick Boseman, the star of the original, died in 2020 at the age of 43, having battled cancer for several years.

Thus we open with the offscreen death from a mystery illness of the Black Panther himself, the reigning King T’Challa, Ramonda’s son. It’s a loss unlike any the Marvel Cinematic Universe has seen, for all the thousands or millions of imaginary corpses that pile up, mostly invisibly, from one caper to the next. 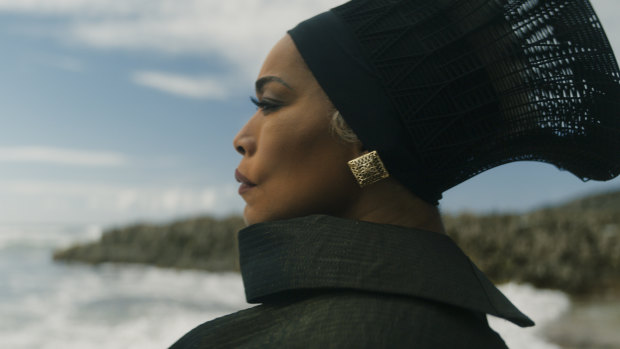 Angela Bassett as Ramonda in a scene from Black Panther: Wakanda Forever.Credit:Marvel Studios via AP

Every aspect of the film is defined by the absence of this charismatic, unifying figure – and T’Challa gets the funeral he deserves, with rows of incongruously smiling dancers, drummers pounding away, and the levitation of the coffin by flying saucer so it can be borne to its final resting place in accordance with Wakandan tradition.

From here, life and art continue to mirror each other, with secondary players asked to step up and take on responsibilities they might never have anticipated. First and foremost, this means that Wakanda Forever joins The Woman King as a current Hollywood blockbuster centred on black African women (played by stars from all over).

Bassett’s Ramonda is the dominant figure where sheer screen presence is concerned – a good queen who gets to be as snooty and imperious as evil queens in movies always are, without her high-and-mighty manner being played for laughs. More of an official protagonist is her daughter Shuri (Letitia Wright), fast-tracked from sparky brainiac teen to heir apparent.

Okoye (Danai Gurira), head of the armed forces, gets some of the better action and comedy moments (and gains, like all the Wakandan characters, from Ruth Carter’s consistently superb costumes). Nakia (Lupita Nyong’o) remains more on the sidelines, in exile running a school in Haiti: why not, I suppose. 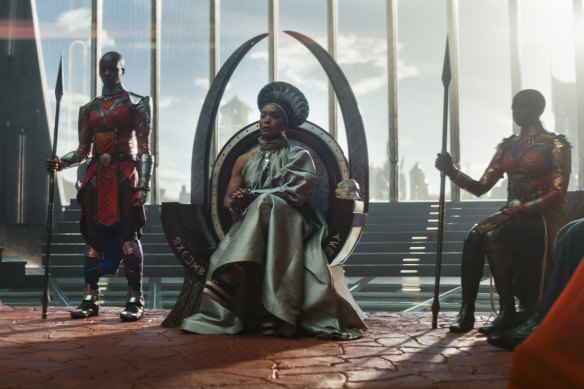 Pitted against all of them is Namor, a half-Mayan demigod with pointy ears and wings on his ankles, played by Mexican actor Tenoch Huerta, who lets these gimmicks do a lot of the work for him. Namor is the ruler-deity of the Talokan, a sunken civilisation resembling Atlantis, and hopes that Wakanda will join him in waging war against the surface: you can guess how that pans out.

What any of this might say about our own version of reality is, as ever with Marvel, up to you. Agent Ross (Martin Freeman), the token decent white American, gets a fairly pointed aside about how the US would deploy the power of vibranium very differently; on the other hands, much of Wakanda’s virtue as a nation is understood to lie in its refusal to disturb the global status quo.

Likewise, while the women of Wakanda are now visibly in charge, any claims to feminism are undercut by a sense that all these characters together can’t fill T’Challa’s shoes (perhaps not what Coogler and company meant to say, but the mid-credits tag is especially noteworthy in this light).

These ambiguities are both strategic and symptoms of the problem with the whole Marvel enterprise: the longer the saga goes on, the less weight is carried by any one instalment. Perhaps that’s why the frenetic, effects-led battle sequences rarely feel more than rote. Nor, indeed, does the “wonder” induced in theory by our tour of Namor’s submerged realm.

Even when everything changes, nothing does. Yet if Wakanda Forever is Marvel striving to stay on course, it’s also a genuine departure from almost everything that has preceded it, and for that reason alone, should be seen.