Dozens of lawyers have quit the agency that runs the National Disability Insurance Scheme in recent months as the organisation comes under pressure for spending tens of millions of dollars on external legal fees fighting against its own clients.

The NDIA’s legal team has come under increased workload pressure with appeals of decisions that make it to the Administrative Appeals Tribunal more than doubling over the past year. 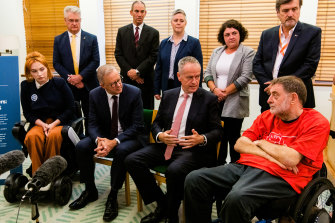 Labor leader Anthony Albanese and spokesman on the NDIS Bill Shorten speak with disabilities representatives to about the scheme in late March.Credit:James Brickwood.

As many as 40 legal officers have quit the agency over the past eight months. The NDIA also refused to address questions about whether chief counsel Chris Burke resigned on Friday to take up a post with another government agency.

The NDIA did not respond to repeated requests for comment.

People with disabilities can appeal decisions to either reject them from entering the scheme altogether or to cut their existing plans.

Between July 2021 and the end of March, there were 4656 appeals relating to the NDIS lodged with the tribunal, which reviews government decisions. For the entire 2020-21 financial year, there were 2160 NDIS appeals lodged.

More than half of the appeals resulted in the agency’s decision being overturned or altered – the highest success rate for any area the AAT deals with.

This is on top of an internal review process, which dealt with 38,466 reviews in 2020-21. Of those where decisions were made, seven in 10 overturned the original decision.

Advocacy group People With Disability Australia says a culture appears to have developed within the NDIA over the past year of pushing people to pursue legal avenues to get the support they need.

“It’s this soul-destroying punitive process, which most people don’t have the capacity or ability to engage with,” president Samantha Connor said.

The public sector union said changes to internal review processes led to the substantial spike in AAT referrals and a rapid increase in workloads for the agency’s lawyers.

“The impact of the Coalition’s staffing cap has meant that staffing levels have stayed the same while workloads increase,” CPSU deputy national secretary Beth Vincent-Pietsch, said.

In the past financial year, the agency spent nearly $22 million on external legal fees. Already since July, it has spent more than $30 million. The agency defended the spending in February, saying it paid market rates for lawyers and cases that went to tribunal hearings accounted for only a fraction of all NDIS participants.

Morrison said during the debate the NDIS was difficult to manage because there was no “cookie-cutter approach” when everyone needed different supports.

“It’s expensive – more expensive than Medicare – but I believe it’s worth investing in,” he said.

Opposition spokesman on the NDIS Bill Shorten – one of the scheme’s architects – labelled it “funding by trial”.

“For people who are just trying to get a better wheelchair or get catheter bags to last them a year or home modifications so they can shower, to have to fight top end of town lawyers is disgusting,” he said.

“[MPs’ offices] are drowning in complaints about the NDIA and the AAT processes.”

He pledged on Tuesday that a Labor government would review the “excessive use of external lawyers” and set up an expert review to stop plans being arbitrarily cut.

While the overall funding for the NDIS is growing as more people enter the scheme, the average size of each person’s package dropped for the first time in 2021.

Data from the agency’s December quarterly report also shows the proportion of people having their plans cut by more than 5 per cent after a review has risen over the past two years, while the proportion who see a large increase has dropped from 60 per cent to 37 per cent.

Greens disability rights spokesman Jordon Steele-John said many people were fearful of having their plans cut and were seeking to have them fixed for two or three years.

“What we see is an agency supported by the Liberal government, who is using administrative tools, legal tools to block disabled people from accessing the NDIS for the supports and services that they need … and then forcing them to go to the AAT through these processes when they ask for the money that they need back,” he said.