Leaders’ debate will shape the final weeks of the campaign

There were many big moments in the debate between Scott Morrison and Anthony Albanese on Sunday night, but one key point highlighted the strategies likely to shape the final two weeks of the election campaign.

The prime minister and the Labor leader were given the chance to ask each other questions at the halfway mark and their decisions revealed each one’s assessment of the other man’s weakness. 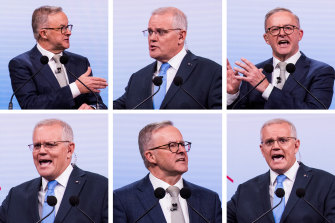 Behind the scenes, both leaders left the studio looking comfortable with how they had done.Credit:James Brickwood

For Morrison, the key question to his opponent was about tax. He wanted to remind voters about the policies Labor took to the 2019 election, like the changes to negative gearing and franking credits. The implication was that victory for the Coalition could depend on fighting the last campaign all over again.

For Albanese, the big question to the prime minister was about the workplace. Should anyone be paid less than the minimum wage? Morrison defended the use of contractors and “gig economy” workers, but his answer came down to two words: “It depends.”

Each side will use those answers to shape the final stage of this campaign with negative messages. Albanese will be painted as the risky unknown who will increase your tax. Morrison will be the out-of-touch leader who will let your salary fall.

In other words, both leaders got what they wanted from the central part of the debate, which was aired on the Nine Network with this correspondent as one of the panellists asking questions.

Behind the scenes, both leaders left the studio looking comfortable with how they had done. Each leader probably felt he had won. The audience vote, collected by a QR code system from thousands of viewers, showed it was a dead heat.

The planning for the debate considered a scenario where the two leaders launched these challenges against each other during the live broadcast, but there were doubts about whether it would happen. It has been a safe campaign in many ways, with few surprises on either side, but that changed on Sunday night when Morrison and Albanese chose to step it up against each other. 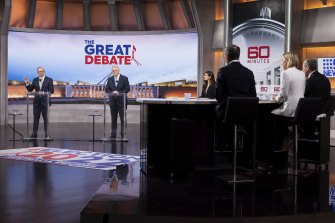 This had the obvious downside of looking aggressive to viewers at home and rebounding on both leaders. Yet the two men have spent the past three years goading each other – and, yes, yelling at each other – on the floor of Parliament. Four weeks into the election campaign, the time was right for them to test each other.

They both signed up for a debate, after all. And that is what viewers got.

While Morrison painted Albanese as a risk, there was a crucial moment that was incredibly risky for the prime minister – when he held out his hand at the moderator, 60 Minutes reporter Sarah Abo, because he wanted her to stop interrupting while he questioned Albanese. The message? Talk to the hand. There were other moments when Albanese could not be stopped, either. The key difference was Morrison’s body language.

That image, when a very good moderator could not stop the two leaders from savaging each other, will probably be remembered as the big moment of the debate. It captured the intensity of the contest.

Albanese was well prepared and on the attack. This was noteworthy because one of the questions of this campaign has been about his preparation. Is he ready? Is he up to the job? The debate answered the doubts about his performance.

This did not mean Albanese leapt ahead of Morrison on Sunday night. Australians know that Morrison is an assured performer and a strong campaigner. He was across key policy details, such as in aged care, and met those expectations.

On national security, however, Albanese laid a plan that probably gave him an edge. Knowing the attack would be that Labor was weak on China, he made the point that United States Marines were stationed in Darwin under a security agreement signed by Labor, but that the Port of Darwin had been sold to China under a Coalition government.

The two leaders matched each other in their final remarks also. Morrison portrayed Albanese as a danger to voters. “A small target is a big risk,” he said. He added that now was not the time to take a risk. It was a variation of his message from the last campaign: “Now is not the time to turn back.”

Albanese had the advantage of the last word and did not waste it. He hammered the messages about insecure work, climate action, respect for women and timed his final words with precision to end on the four words he promised he would never say as prime minister: “That’s not my job.”

Expectations were lower for Albanese and there will be a strong sentiment that he was the winner in the debate because he exceeded expectations. He certainly proved he is match-fit for the final stretch.

Yet the verdict from viewers at home was in line with the view from the floor. This was a very tight contest.

And the election might be just as tight. The polls show Labor has a strong lead and the odds seem against a Coalition victory, yet Morrison proved at the last election that he can tip the balance in the final days. Anything can happen when there are two weeks to go.