Major manufacturers warn thousands of local jobs are at risk unless gas is held back from being exported as the Albanese government calls emergency meetings with Queensland’s gas producers and state ministers to address spiking energy prices. 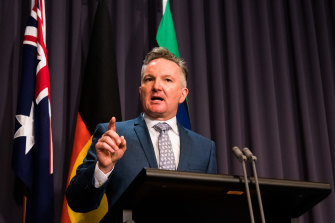 Wholesale power and gas prices have been surging across the eastern seaboard as a result of cold weather driving up demand for heating, a series of outages at coal-fired power stations and spiking commodity prices because of the war in Ukraine.

Bowen said the “situation is serious” but regulators were working with gas producers on the Gas Supply Guarantee mechanism, which is designed to fill gaps in the local gas market.

“As per usual it’s up to a Labor government to clean up the mess, but it’s vital they take action quickly and decisively.”

In Western Australia, the state government requires gas exporters to set aside 15 per cent of their production for local buyers. Large energy users argue a similar scheme on the East Coast would significantly boost supply and help keep a lid on prices.

The federal government can intervene in the market under the Australian Domestic Gas Security Mechanism (ADGSM), which empowers Resource Minister Madeleine King to redirect exports into the local market.

But Bowen said the ADGSM is “not a short-term answer” because it requires a prescribed period of consultation, cannot be enacted before January, and only triggers enough supply to fill gaps rather than cut the cost of gas.

“It is a supply trigger, not a price trigger,” he said.

“It is my intention to convene a meeting of all energy ministers early next week to be advised by AEMO and AER [Australian Energy Regulator] on the current supply situation on any further necessary actions which may need to be taken.”

Saul Kavonic, an energy analyst at investment bank Credit Suisse, said he doubted that the new Labor government would pull the trigger on the ADGSM. “The new government won’t want one of its first actions to be interventionist that puts many large businesses offside,” he said.

Instead, Kavonic said he expected to see a “behind-the-scenes” agreement struck between the federal government and the industry for Queensland’s giant liquefied natural gas producers to divert more gas to the domestic market.

The Australian Petroleum Production and Exploration Association, a group representing gas producers, said talks with government leaders were under way.

“Our members are working with government and regulators and all parties to resolve the issue,” acting chief executive Damian Dwyer said.

“South Australia’s Master Butchers Co-operative – with its 450 independent butcher members – has seen gas costs at its Wingfield plant in Adelaide move from $135,000 per month to more than $900,000 a month in the last few months,” Morrison said.

Bowen on Thursday said he would be guided by expert advice from Commonwealth energy agencies, emphasising a change in attitude from the previous Coalition government, which butted heads with AEMO over the management of energy supply.