Martin Lewis has warned that millions of European Health Insurance Cards may be out-of-date and encouraged holidaygoers to renew ‘as quick as you can’ today.

The London-based Money Saving Expert, 48, appeared on This Morning and urged viewers to check their EHIC, which entitles Britons to free healthcare while travelling in the EU, because travel restrictions are suspected to be eased soon.

He said ‘millions are out of date’ and insisted people ‘go online and order one of those as quick as you can’ for free – reminding audiences at home that they should never pay for the cards.

However, when finishing his segment, the financial expert warned that viewers should be wary of booking once-in-a-lifetime trips at the moment because some travel insurers may not be offering coronavirus-related coverage. 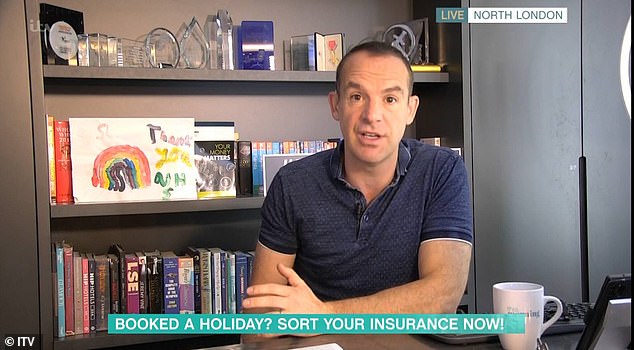 Martin Lewis, 48, from London, (above) warned that millions of European Health Insurance Cards are out of date and encouraged holiday goers to renew ‘as quick as you can’ today

Speaking to hosts Holly Willoughby and Phillip Schofield, Martin said: ‘Now the first thing I think everyone should be doing right now – because you’re probably going to Europe as I doubt it’ll be unrestricted anywhere else – is going and looking at your European Health Insurance Card.

‘Go get one of those, they give you access to European Union and a few other countries state run hospitals and GPs for the same price as a local.

He went on: ‘They still work and they’re still going to be valid until at least January 1 because we’re in that transitional phase of leaving the European Union. 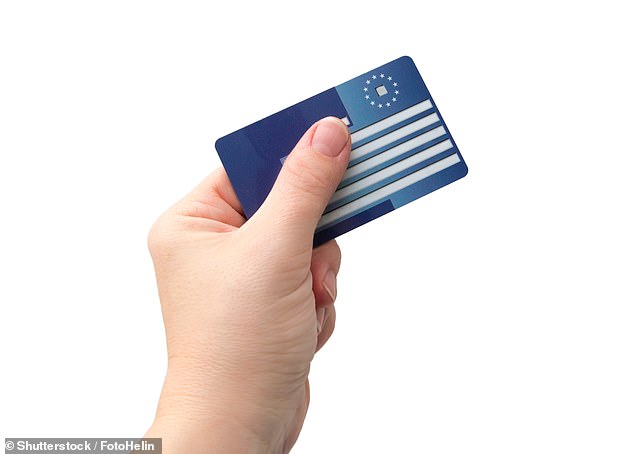 Martin appeared on This Morning and urged viewers to check their EHIC (pictured), which entitles Britons to free healthcare when travelling in the EU, because travel restrictions are suspected to be eased soon

‘Now the big thing about those is that millions of them are out of date.’

He continued: ‘So go get your card, you think you’re covered, look at the end date on it and many of you will be surprised that it isn’t in date.

‘So I’d go online and order one of those as quick as you can. Very important again, never pay for those cards.’

Martin explained: ‘They are always free, there is no such thing as a paid fast track. 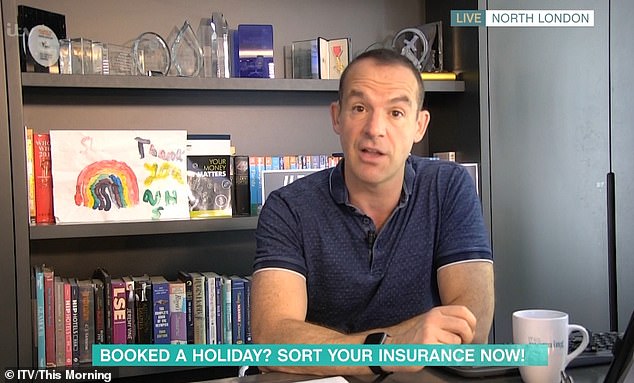 ‘There are websites out there that will try and charge you, they are not official websites. Do not pay to get or renew an EHIC. You can do it yourself.’

The financial expert then explained that travel insurance is now available again after sales of policies were largely stopped in March.

WHAT IS THE EHIC?

An EHIC gives its owner access to state-provided healthcare during a temporary stay in any of the EU’s 27 countries.

It is also valid in Switzerland and the European Economic Area nations of Norway, Iceland and Liechtenstein.

Benefits include GP visits and hospital stays, but do not extend to travelling abroad specifically for medical treatment.

The EHIC also does not cover emergency airlifts and is therefore not recommended as a replacement to travel insurance.

Even with the EHIC, users may have to pay a small amount towards their treatment.

This payment may be redeemable once back home.

Martin said: ‘There are now some policies on the market. Nowhere near as many as before… so it is going to be more expensive.

‘Now the first thing to say, I’m afraid, is that there is no mainstream policy available, new policy, for coronavirus cancellations.’

He added that if people catch the condition while on holiday, some insurances will cover that, but many won’t if it occurs before a trip – meaning the visit has to be cancelled.

Martin said people should avoid booking once-in-a-lifetime trips this summer, but continued: ‘[Go on holiday] with caution but if you want to go away, do it.’

It comes after reports that Boris Johnson will give the green light to foreign holidays this week when the Government unveils its long-awaited travel corridor plan.

Ministers will say Britons can visit any one of around ten countries without having to quarantine – reviving summer holidays after almost four months of travel restrictions.

‘Air bridges’ to France, Spain, Italy, Greece and Turkey have been all but confirmed, sources disclosed, with the first flights set to take off on July 4.

Germany, Austria, Belgium, the Netherlands, Gibraltar and Bermuda will also reportedly be announced as destinations in the first round of ‘safe nations’ on June 29.

The Mail has learned Portugal is likely to be included on the list of destinations, despite concerns over recent outbreaks of Covid-19 in the Algarve.

Medium-haul destinations such as Dubai will also reportedly be available for Britons to explore from mid to late summer, with trips to Vietnam and Hong Kong on the horizon from late August or September.

Britons are also expected to get the green light to visit Canada, Morocco and the Caribbean from August.