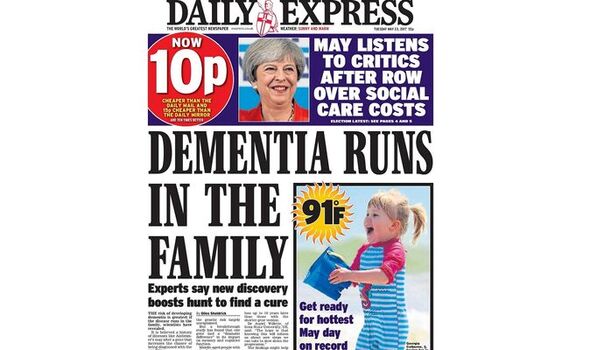 The study found a history of illnesses such as Alzheimer’s may alter a gene that increases the chance of being diagnosed with the condition. Up until the study, around 30 separate genes had been linked to dementia, with the genetic risk largely unexplained.

88 years ago (1934) US bank robbers Bonnie Parker, 23, and Clyde Barrow, 25, were ambushed by police and killed in Louisiana. The criminal couple, who travelled around the Midwest with their gang, were eventually tracked down by Texas Ranger Frank Hamer.

Their exploits were captured in the 1967 film Bonnie And Clyde, which starred Warren Beatty and Faye Dunaway.

24 years ago (1998) We reported that people in Northern Ireland voted overwhelmingly in favour of the Good Friday Agreement, which brought peace to Ireland.

More than 71 percent voted for the agreement, with British PM Tony Blair hailing it as a day for joy.