One of the fan’s friends reached out to the rapper as the family was struggling to raise funds — “How much y’all need,” Megan quickly wrote back.

Megan Thee Stallion stepped up in a huge way for a late fan with a donation more than doubling her family’s fundraising efforts to help them achieve their goal of covering her funeral expenses.

Megan became aware of Shaniah Scales’ passing when one of her friends reached out to the rapper via Twitter. “Meg we lost a hottie 😭 our best friend passed away unexpectedly,” the friend wrote. 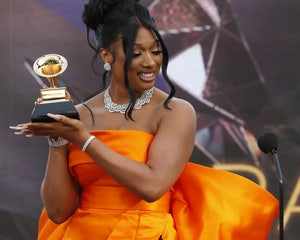 “They absolutely loved you, listening to ur songs was something we did every time we were together,” the friend continued. “We’re helping their family w funeral costs. We started a gofundme & are halfway there.”

When she saw the tweet, Megan quickly wrote back, asking, “How much do y’all need?”

In almost no time, Megan had jumped onto the family’s GoFundMe page with a donation of $8,155, helping them immediately achieve their $16,000 goal. With their goal met, the family has since disabled the page’s ability to accept further donations.

The fan who initially reached out to Megan on behalf of Shaniah’s family responded to Megan’s donation with tremendous gratitude. “I am crying so hard,” she wrote. “I will ride for you ntil the day I die.”

“I know our friend is up in heaven smiling so hard right now,” she continued, thanking Megan for helping the family.