Royals flushed? Harry and Meghan may lose their titles over Oprah tell-all

Prince Harry and Meghan Markle’s hotly-anticipated interview with Oprah Winfrey kicked off on CBS at 8 p.m. Sunday — and is expected provide an unprecedented peek into their sensational split from the British royal family.

“I’m ready to talk,” Markle, 39, said in a snippet of the two-hour sit-down released last week.

The former TV-actress is expected to slam Buckingham Palace, accusing the royals of “perpetuating falsehoods” against her and 34-year-old Harry.

Life inside the royal family was “almost unsurvivable,” Markle is poised to say.

The Duke and Duchess of Sussex left their royal duties last March over what they said was the British press’ unfair and racist treatment of Markle, who is biracial.

But now that they’re officially post-Megxit and settled in Montecito, California with baby Archie, the self-exiled pair don’t seem to have anything to lose by giving the TV chat.

Clips of the pre-recorded interview show the couple holding hands in a lush garden across from Winfrey.

Wearing an empire-style black Armani dress, Markle — who recently announced she is pregnant with the couple’s second child — spoke one-on-one with Winfrey before being joined by Harry.

She refers to the royal family as “the Firm,” a term sometimes used to hint at the monarchy’s nefarious undertones.

“I don’t know how they could expect that after all of this time we would still just be silent if there was an active role that the firm is playing in perpetuating falsehoods about us,” Markle will say.

“If that comes with risk of losing things,” she will add, “I mean, there’s been a lot that’s been lost already.”

Markle will also detail how she wasn’t able to have a conversation with Winfrey ahead of her fairytale 2018 wedding to Harry without royal minders present.

But now, “it’s really liberating to be able to have the right and the privilege in some ways to be able to say yes,” to an interview, Markle will say. 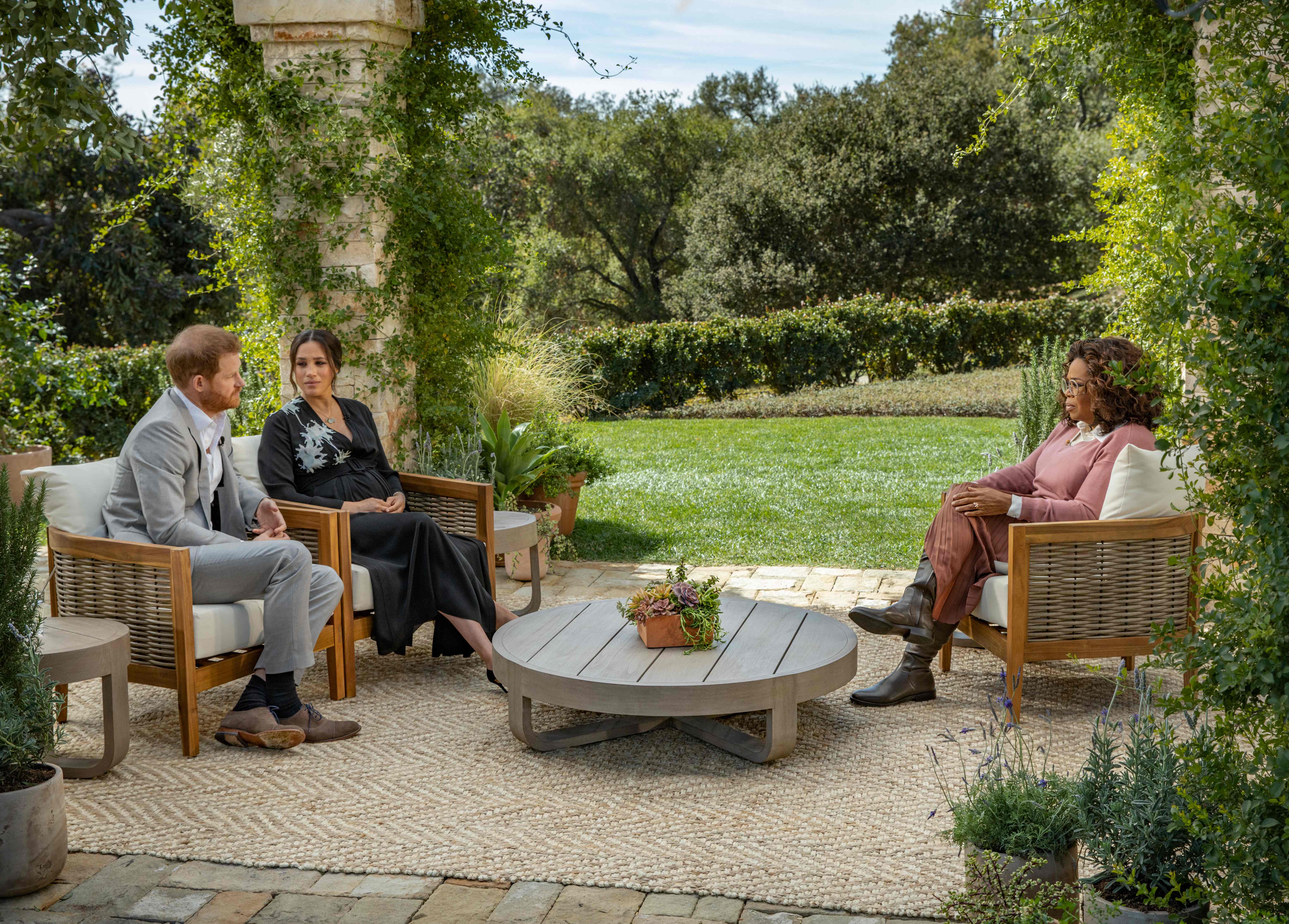 During the sit-down, Harry will also invoke the memory of his late mother, Princess Diana, who was killed in a car accident in Paris in 1997 after being chased by paparazzi.

“I’m just really relieved and happy to be sitting here talking to you with my wife by my side, because I can’t begin to imagine what it must have been like for [Diana] going through this process by herself all those years ago,” he said, adding, “because it’s been unbelievably tough for the two of us.”

It also follows the announcement of a palace probe into explosive allegations published in a UK newspaper that Markle bullied palace staffers during her short stint as a senior royal.

She and Harry have denied the claims and said they are victims of a calculated “smear campaign.”

It’s unclear what the royal response will be. The Times of London, citing an anonymous source, reported that the Queen would not watch the interview.

British audiences won’t be able to see the full special until Monday night when it airs on ITV.