Did Meghan Markle display hostile behavior during an interview while promoting her show Suits? A body language expert believes that Markle showed signs that she was unhappy when the interviewer ignored her.

Meghan Markle’s reaction after she was ignored during an interview is revealing, expert says

Body language expert Jesus Enrique Rosas took a closer look at an interview Meghan gave when she appeared on the show Suits before she met Prince Harry.

Rosas started the video by noting, “Wait until you see her odd behavior with the interviewer.”

Specifically, the body language expert pointed out her “outrageous reaction” when the interviewer “dares to look away from her.” Meghan is answering a question when Jay glances away from the conversation for a moment, prompting her to look behind her and ask, “Who are you looking for?”

Rosas noted, “There is absolutely no doubt that Meghan’s reaction was odd.” The body language expert backed up the conversation for a closer look. “I find it incredibly annoying that Meghan decided to cut short what she was saying … just to call him off about him looking behind her back,” he said. 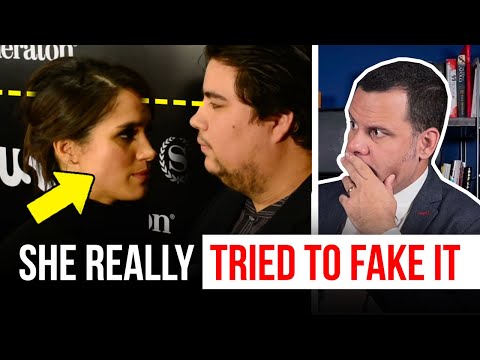 Rosas further analyzed the situation. “And this has severe implications in the way Meghan acts and judges herself,” the expert explained. He found it revealing that Meghan stopped her answer when she caught the interviewer glancing away for a second.

“If someone stops cold whatever they’re saying and turns around to see what’s going on behind them because the person they’re talking to broke eye contact for less than one second, that is extreme insecurity,” he explained.

Rosas continued, “You’re not that invested in what you are saying, and when you lose attention of the other person for the tiniest bit of time, you have to turn around to look and to compare yourself to whoever is behind you.”

The expert noted that actors often carry this worry with them. “But despite how insecure a professional of acting can feel, this kind of behavior is not normal. Like, at all,” he said. “It looks more like a tantrum.”

Then he played the moments after Meghan called out the interviewer and watched her body language. She addressed the camera and said, “Ruben is like looking over my shoulder to try to find somebody else.” She also grabbed his notecard and started reading it.

“I mean, how insecure can this get,” Rosas wondered. He also pointed to the way Meghan put her arm over the interviewer’s shoulder, calling the move “an ownership gesture.”

Rosas said the interviewer “was being playful and polite” and found Meghan’s reaction unnecessary. 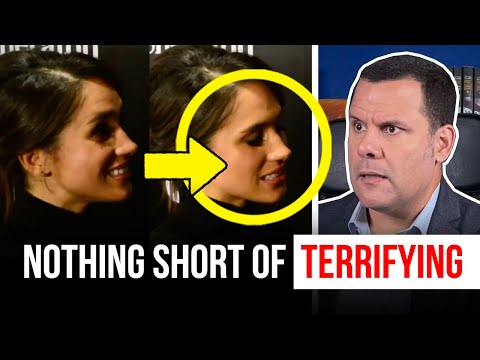 In another video about the same interview, Rosas pointed to Meghan’s “mask slip” via the many facial expressions she exhibited in 10 seconds. “This is not common at all,” Rosas shared. “And something that we no longer see in Meghan’s videos.”

He broke down Meghan’s smile which appeared “really tense,” followed by a serious expression where she “clenches her jaw muscles.” She then exhibited “a very intense look” before she smiled again, then turned with a long blink, and faced the interviewer but tensed her neck muscles.

“Compound expressions can have any kind of facial combination,” the body language expert explained. “In this case, my personal take on it is that I see hostility.”

Rosas then moved on to the way Meghan faced the interviewer and clenched her jaw with her head tilted down. “This is a clue about her personality,” he explained. “Clenching the jaw, most of the time, is trying to release the stress. Does it mean that Meghan is angry all the time? Maybe not, but it seems that she’s adopted that jaw clenching as a bad habit.”

He further pointed out that she “was upset and she was doing a very bad job at hiding it.”