Sleek, shiny and glamorous. The image of Audrey Hepburn atop a Vespa in Roman Holiday had me envisioning myself aboard a chic, pistachio-green scooter, a polka-dot scarf wrapped over my windswept hair, whooshing through the Italian countryside. The beauty of late-night movies and the deceptive allure of the Italians doing anything and making it look effortlessly cool convinced me I would end up on a scooter.

The reality is, it's not effortless. But, as more women are discovering, it's not so challenging either. Every time I've had to get my car repaired, or faced the immense costs of panelbeating or battery replacement or any number of other things cars require, I've found myself googling "motorcycle licence". 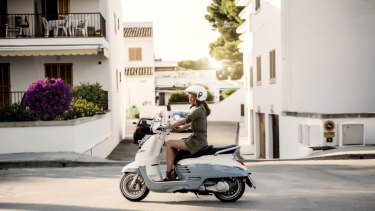 There is no room for distraction when you’re sitting atop an engine without the protective shell that a car provides.Credit:Getty Images

In the past, I've looked into it, only to be swiftly convinced by friends, family and strangers that it's dangerous; akin to suggesting I go swimming nude through crocodile-infested waters. In reality, though, there are hundreds of thousands of Australians with a motorcycle licence, while the number of women here with both a car and motorcycle licence comes to about 50,000.

I live in the heart of Melbourne, with crazy new P-turns and bumper-to-bumper traffic at all hours. Recently, on one of my regular journeys, I found myself looking longingly at the motorcycles and scooters sweeping by my window in the bus lane. There are only so many podcasts and audiobooks you can withstand before the madness of sitting endlessly behind the same truck in motionless traffic drives you to despair.

To get your motorcycle or scooter licence, there's a handbook to scour and two days of practical and theoretical training and assessment. Let's be real: it's not cheap (about $600). And if you need one-on-one lessons, as I did, these cost between $70 and $130 a session.

The first day of my course at RideTek MTA at Victoria's Sandown Racecourse was humbling. Even starting my scooter proved a mental challenge, and as a non-pushbike user and the driver of an automatic car, mastering balance, throttle, braking and turning at 30 kilometres an hour or more was no stroll in the park. I found myself stopping, starting and even toppling over.

The instructors were brilliantly patient (and hilarious), but my Audrey dream wasn't quite as attainable as I'd imagined. What I hadn't considered was how exhausting it is to be so entirely focused. There is no room for distraction when you're sitting atop an engine without the protective shell that a car provides. Attention to the sounds, the sudden movements and changes in weather and other driver's intentions is the split-second difference between life and death. I found being so highly attuned to my own body, my connection to the bike and where I am in relation to the road and other drivers both invigorating and exhausting.

But it is liberating, ultimately, to get on the road without either radio or back-seat passengers diverting my attention. It is an act of mindfulness – the thrum of the motor millimetres from my muscles, the closeness to other riders and cars, the sense of trust you must have in your instincts to even get on the bike in the first place, then sailing between cars, pedestrians, bikes and footpaths. Being on a Vespa, or a motorbike, is the closest feeling to flying, I think.

Is it dangerous Yes, it can be.

Is it empowering, liberating, joyful? Absolutely.

See you on the road.

This article appears in Sunday Life magazine within the Sun-Herald and the Sunday Age on sale June 30.