Tens of billions have been put aside by the Morrison government to spend on emergency medical supplies and further financial assistance as the global economic chaos from the coronavirus outbreak deepens.

The government has further bolstered its war chest as it embarks on months of unprecedented spending in an attempt to cushion the domestic economy against the fallout from tough measures to further halt the spread of COVID-19. 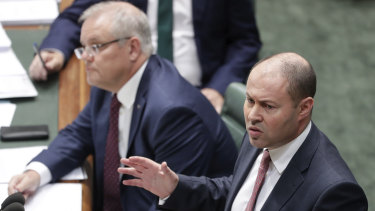 Legislation to authorise the extra spending was set to pass both houses of Parliament on Monday, with an annual discretionary fund of $1.2 billion controlled by Finance Minister Mathias Cormann boosted to $40 billion.

Parliament is not expected to return until October 6, when the budget will be handed down, after a scaled-back session on Monday to pass supply bills and the legislation needed for a $17.6 billion stimulus package and $66 billion of small business and income support measures.

Government sources said the discretionary fund was initially expected to be $22 billion but was increased to $40 billion following negotiations with Labor, which secured safeguards and assurances from the government as to how the money would be spent.

The fund will be used to support state and local governments with extra health costs and the potential for more direct assistance for sacked workers and struggling businesses.

The government is also expecting to increase spending on importing emergency supplies at a higher price because of soaring international demand.

Federal Health Minister Greg Hunt told Parliament on Monday a shipment of masks headed for Australia had been diverted to another country, while Australian company ResMed, which makes sleep apnoea machines, had been asked by the government to make 1000 ventilators.

Mr Hunt said orders had been placed for another 1.5 million coronavirus test kits.

Treasurer Josh Frydenberg described the coronavirus as a "Team Australia moment" as he introduced the legislation in Federal Parliament.

He said the government's "unprecedented" measures were designed to keep "Australians in jobs and businesses in business".

"We call upon all sections of the Australian community to join in this struggle," Mr Frydenberg told Parliament.

"We now expect the economic shock from the coronavirus to be deeper, to be wider and to be longer. Our response will provide the hope and support [that] millions of Australians need at this time."

The opposition vowed to offer bipartisan support for the spending measures but has criticised the government for dragging the chain and failing to give greater support to the nation's growing casual workforce.

Labor leader Anthony Albanese said the opposition also remained highly critical of the government's measures to allow those whose livelihoods had been affected by the virus to access their superannuation early.

He said Labor would be "as supportive as possible" and would give the benefit of the doubt to the government.

Get our Coronavirus Update newsletter for the day’s crucial developments at a glance, the numbers you need to know and what our readers are saying. Sign up to The Sydney Morning Herald’s newsletter here and The Age’s here.